The first sale, of a three-part invitation auction, of the Russian Post Offices in the Chinese Empire has been held on April 20 in Geneva.

This collection, built over decades by Dr. Raymond Casey is probably the most comprehensive and extensive ever formed for this collecting area.

The sale featured highly competitive room bidding from collectors in David Feldman’s auction rooms in Geneva & Hong Kong as well as around the world via the Internet. Results were far in excess of pre-sale estimates, and produced numerous world record prices for covers from Russian Post offices in the Chinese Empire. Notable standouts were:

TIENTSIN: 1875 Cover to Dereham, England, franked with 1866-75 10k strip of four and 3k pair.  Earliest known mail from the official Russian Postal Administration in China, using Russian canceller on Russian stamps, and only known use of Tientsin’s first Russian handstamped canceller on cover. 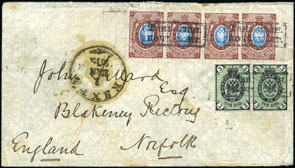 ULYASUTAI: 1916 Envelope sent insured to Peking, franked with Arms 10k and 35k plus Romanov 50k, the only known example of an insurance label from Ulyasutai, only seven covers with Romanov franking recorded by Hellrigl, this being the only one from Ulyasutai, fine and unique exhibition item.

A world record result for Mongolia! 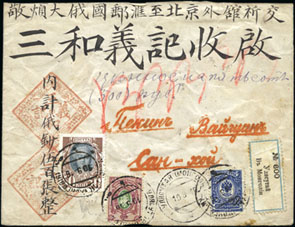 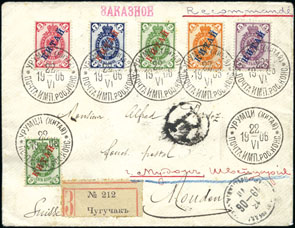