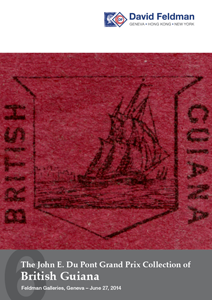 On Friday 27th June 2014, we offered the famous collection of British Guiana from the late John E. du Pont. And at 3pm CET, little did we know that philatelic history was in the making.

The day began with the auction of one of the best collections of classic Tasmania ever formed. Koichi Sato’s collection sold for nearly €420’000 (plus unsolds). That pleasant start to the day was followed by a BBQ for lunch, with those that had made the journey to Geneva enjoying the beautiful sunshine Switzerland had to offer.

Around 20 people made the trip to the Feldman Galleries in Geneva, from all over Europe and even as far away as Brazil and the Middle East. A dozen people were signed up for bidding by telephone and around 30 people were logged in and ready to bid on the internet (countless more connected just to watch). All for the opportunity to bid and hopefully buy an elusive item to add to their collections; or perhaps only to get a slice of this once-in-a-generation auction, with these particular British Guiana stamps and covers not being available on the open market for at least 30 years.

Lot 60000 opened in the room and quickly surpassed the bids on the book and rose to €190’000, before being hammered to the room bidder against the telephone. A great result and a fantastic start. Instantly easing any concerns or doubts we had in the back of our minds.

And it was the same story for lot 60002…and 3…and 4…and lot 5 realised 8-times the catalogue price. It kept on going. Still, the bidder in the front row could not be beaten, no matter how hard the telephone or room bidders pushed.

With the cotton-reels section completed, a mixture of despair, disbelief and amazement was written across the faces of those who had come. Some not only making the trip to see us in Geneva, but also to our viewings in London and Paris, with some spending hours checking the condition of these primitive yet fragile stamps. Already for some, it would be a fruitless journey, but others still held out hope that the mysterious bidder in the front row would lose interest later on. It was not to be. 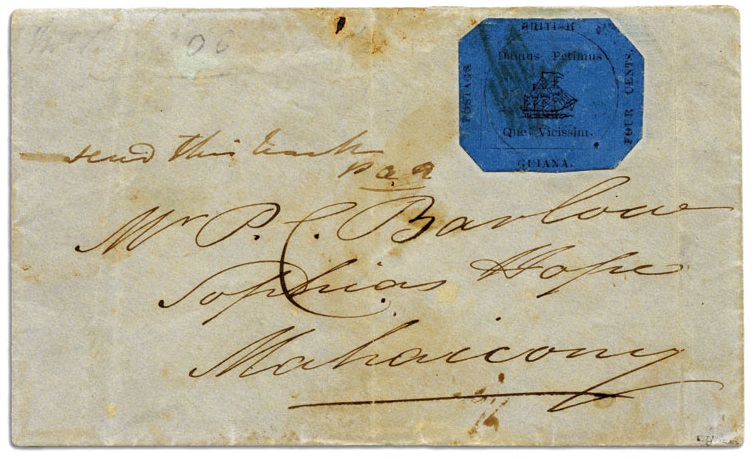 The result: A total hammer price of €5’400’000, nearly 5 times the catalogue estimate. With the top price of the day going to lot 60089; the famous “Hope” cover, the only known full cover with the extremely rare 1856 4c black on blue provisional (see image at right).

Those that had come were surprising upbeat as they left. I guess partly due to the fact that they knew they had witnessed something special; something they could regale their fellow collectors with for many years. Probably more likely though, it was because that they had possibly just witnessed the value of their collections increase 5-fold in the space of a few hours! Time will tell.