A Greek God of Covers

It isn’t difficult to understand why the Kingdom of Greece, in 1860, decided the head of Hermes would be the most fitting illustration to use on their first postal adhesives.

Whilst in Greek mythology Zeus is the sky and thunder god who rules as king of the gods, and apparently the Father of Hermes, there is none better in all the heavenly realm to place on your post than Hermes, because he’s the ‘messenger’ of the gods.

So it stands to reason that he’d be the one who’d bless all Greek dispatches. That’s how the Greeks saw it, anyway.

The “Large Hermes Head” were the first of these blessings, issued in October 1861, and which remained in use up until 1886. During the first few months of issue there were two printings, the more angelic Paris printing, and then the slightly more beastly Athens printing, the former from France, the latter home-made. Literally.

Now there’s a devil of a stamp in this sub-set of Athens issues which heralds a significant event. Namely the famous 20 lepta blue without “control figures” and with the “quadrillé” background, usually called the ‘Athens Provisoire Issue’.

Word has it, that these ‘provisional stamps’, not quite up to the fine quality produced by the French printers, were in fact the Greek printers’ immortal plate-proofs, which were never intended for the earthly work of regular stamps.

However, due to supernatural demand for postage, stocks ran dry, so Greek postal authorities decided these godly proofs could be transformed into mere mortal stamps.

Thank the gods they did! Because it’s given philatelists heavenly joy ever since. As you might expect, this act of free will by the postal administration wrought consequences for this deviation, and  the 20 lepta blue provisional printing is regarded as the most divine standard stamp of Greece.

The featured example of this manifestation is known as ‘The Conegliano Cover’ and a supreme messenger of just how god-like this 20 lepta deep blue stamp really is. There are only two known items with its usage in combination with other values, this example by far the better, the other being defective. And this example is used in conjunction with the Paris printings of the 5 and 80 lepta, sent from Athens to Conegliano Italy, in Dec 1861.

Apart from its celestial beauty, it is without doubt one of the greatest items in Greek philately, selling at the David Feldman auction in May 2004 for an unearthly 206’000’00 CHF. It was in the collection of George Zachariades (1916-1986) a famous Greek philatelist and legendary collector of Greek Hermes head stamps. 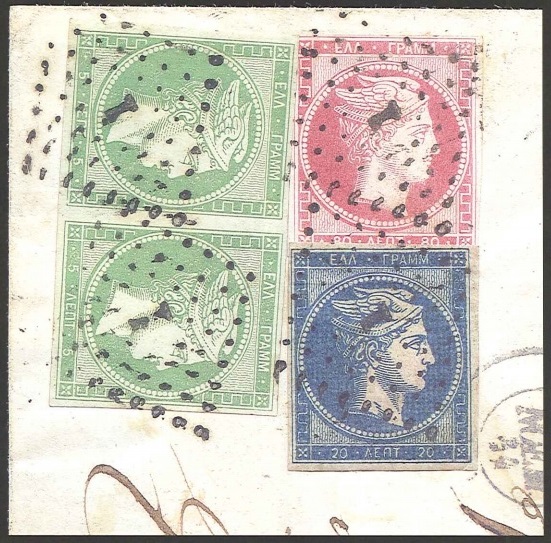 However, putting on my white robe of philatelic righteousness, and being a tad judgmental here, mentioned for purity reasons, I confess that ‘The Conegliano Cover’ is perhaps second to ‘The Solferino Cover’ in Greek philatelic mythology, and that is because at a David Feldman auction in February 2002 it sold for a Zeus like figure of 646’000’00 CHF. 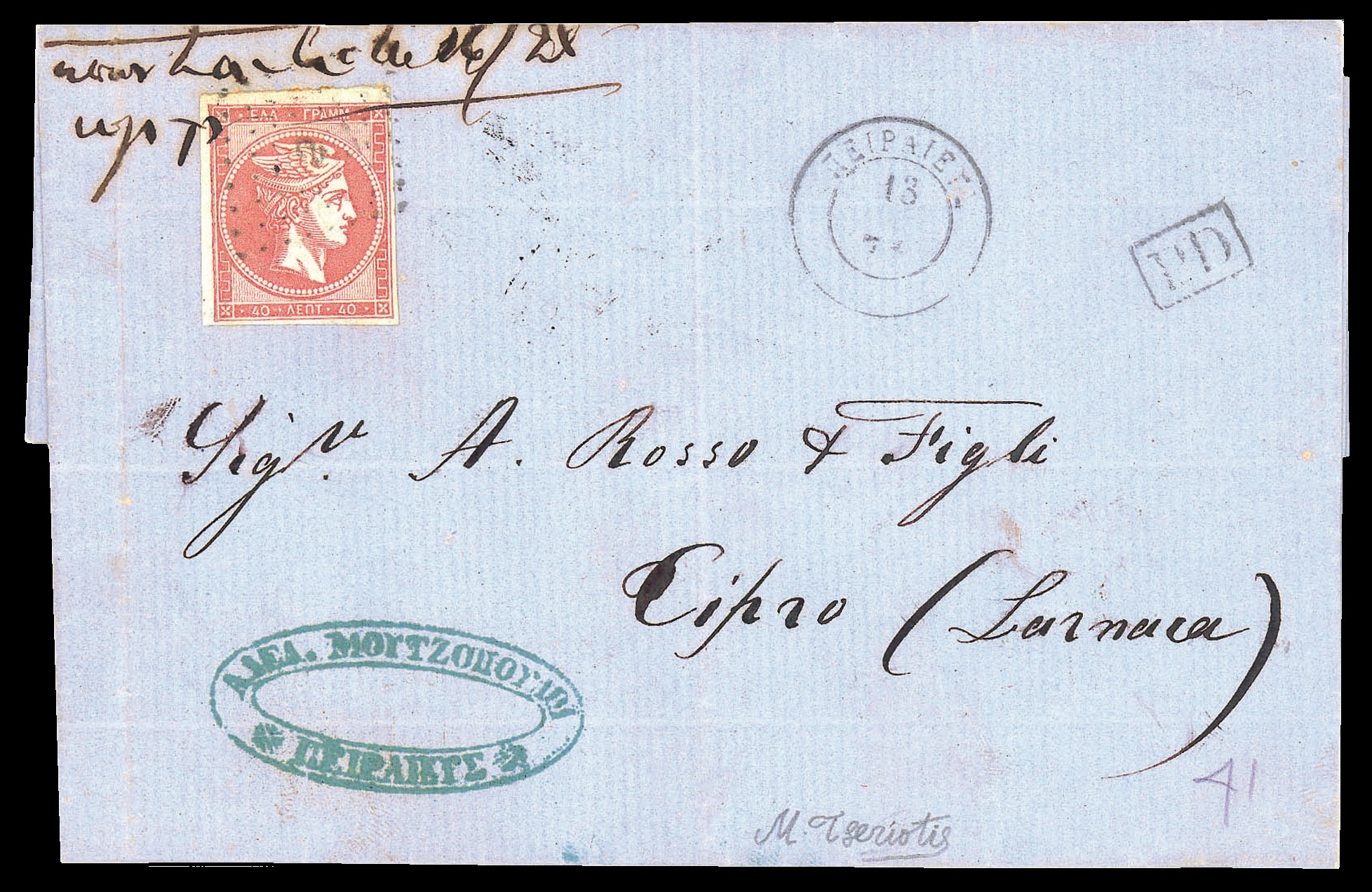 Highest price ever for a Greek item. 1871 Folded cover from Piraeus to Larnaca, Cyprus, franked with the 40 lepta “Solferino”, lilac-rose on greenish paper. Sold by David Feldman at auction for CHF 646’250 in 2002.

You see, even in the realm of the gods, you have to acknowledge when you encounter a power more immense than your own. As you’ve already learned, Zeus is the king of the gods. But that’s another story. And like this one, it’s legendary.

Between 2002 and 2006, David Feldman sold one of the greatest collections of Greece Large Hermes Heads ever formed over a series of seven auctions: