No Fish on the Menu

So we’re in Paris and feeling peckish. Don’t worry, there’s no better place on the planet than being in France, and even better the capital if you’re in need of some top nosh, or even posh grub. Because as we all know France is synonymous with fine dining – I mean, they invented Haut cuisine, Nouvelle cuisine and the Michelin star. And with over 9000 restaurants in the city of Paris alone, you’ll be able to get some French Cuisine such as Foie gras, Confit de canard, Poulet Basquaise, Boeuf Bourguignon and even something sweet like Crème Brûlée, to name but a few specialities. Sounds delicious, and we know it will all be prepared to perfection and the presentation will be fantastique.

However, whilst we rightly applaud the French for their obvious culinary capabilities, I’d like to highlight a quite different facet of the cooking ability of the Parisians, namely their resourcefulness and imagination. Which, when it comes to cuisine, they are second to none, as I’ve just found whilst researching the featured ‘Boule de Moulins’ 1871 cover, which was part of the David Feldman Rarity auction in the 2013 (lot 20049).

Unfortunately, the flare shown in the kitchen during the late 1870 and start of 1871 can not be said of the Parisian Post Office capabilities at the time, which admittedly was during the Franco-Prussian war, and in their defence, hampered by the Siege of Paris. Basically, this siege prevented anyone or anything going in or out. The postal service obviously interrupted, and as you might expect food – or more importantly if you’re French; ‘ingredients’ – began to run out.

So what did the resourceful Parisians do? They looked around them and began to use what was available. Dogs, cats, and rats for starters. And for the main course too! And to demonstrate their imaginative skills, here’s some snippets from a Paris menu in November 1870; Leg of dog flanked by raccoons with a pepper sauce, sliced ​​cat maple with mayo sauce, and to give you an even better flavor of it; salamis de rats with sauce Robert.

I didn’t even bother mentioning the; Plum-pudding au rhum et à la Moelle de Cheval. Horse pudding. The latter meat we know is on the menu even today, but it makes you stop and think, just how bad things must have got to dish-up cats and dogs, let alone rats. And as I discovered it got even worse! More on that in a moment, but were the Parisians as imaginative with their interrupted postal service?

Well, I can confirm they were, albeit one has to confess that it might not be as successful as the dog liver skewers. Their first idea was to utilise balloons to take mail over enemy lines – known locally as Ballon Monté, and in principle this sounded good but the reality is it was a bit of a dog’s dinner, and didn’t go down too well, or more accurately kept going down, but not always on the right side of the fence. The German soldiers gladly intercepted wayward balloons. 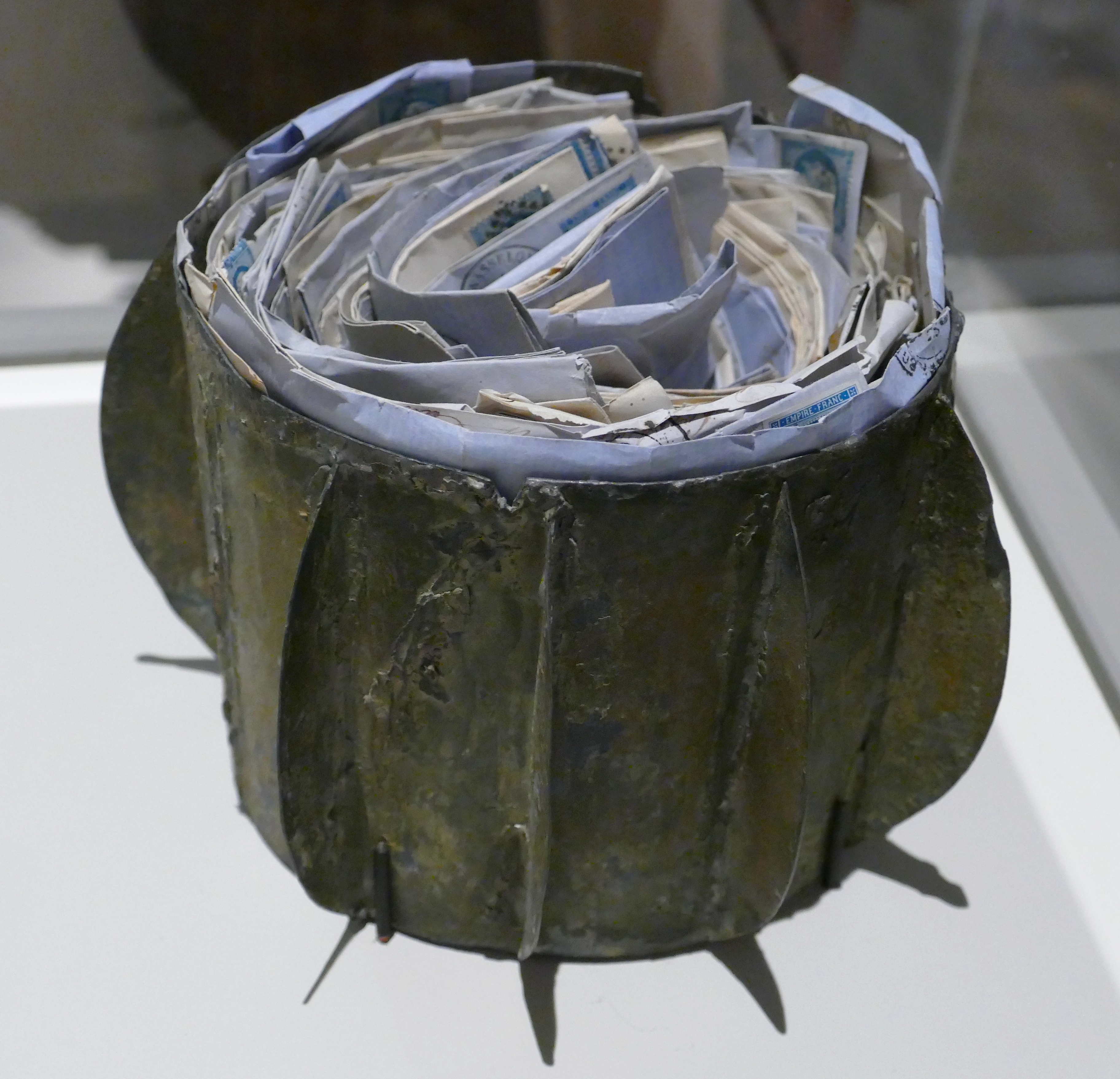 So a couple of bright sparks cooked up a quite different solution, which was to put mail in watertight zinc canisters and float them up the river Seine from Moulins, the natural current taking them to the outskirts of Paris, where they would quite literally be fished out – poisson du jour. Sadly, despite the creativity of this scheme fish wasn’t seen on any menus, and none of these zinc canisters – and there were over 50 sent up river – were actually caught by the Parisians during the siege, and it has only been in subsequent years that some of this mail has been recovered and served up and put on the table so to speak.

So if the question is “how do you like your cover sir? Rare?” Well, you are in luck, because these Boule De Moulins covers are all rare, and our featured one is what any decent restaurateur would describe as ‘Blue’, because having a GB franking on the outside going into Paris, via Boule de Moulins, is extremely ‘Rare’, but what makes this especially tasty, is what’s on the inside of cover. The filling – or ‘contents’ to non foodies – which confirms that the writer (in French) was responding to a letter ‘received’ via the fated Ballon Monté (balloon mail) and if seconds is your thing then you get a double portion because more interestingly it says: “this letter is sent by a new secret way”, which we all know ‘now’ was the rather fishy up the river Seine recipe. Which tells us the intended recipient never got to savour the rather succulent innards, albeit we are feasting upon them now.

And one last thing. There is sadly an elephant in the room. Well two actually. No, not the fact that the French lost the war, and they failed to retrieve any of the Boule de Moulins at the time, but that things got so bad in Paris that once the dogs, cats and rats were all cooked up, the Parisians turned to the local Zoo animals at Jardin des plantes. Where there ‘was’ a pair of elephants –  Castor and Pollux (I know it’s sad!) –  who were, among other animals, slaughtered for their meat. In fact, on the Christmas menu in 1870 there was; elephant consommé, donkey’s head, roast camel, kangaroo stew, antelope terrine, and bear ribs. You’ve got to hand it to the Parisians, they didn’t let trivial matters such as a war, a siege to their city, or indeed a lack of ingredients get in the way of their French cuisine. It’s just a shame they couldn’t fish!