Our online auction of China features 198 lots, including Large Dragons, Treaty Ports, Dowager Empress issues with highlights including imperforate between varieties, Red Revenues, Gold and Silver Yuan Issues and a strong section of PRC. It starts at 10am CET on September 1st.

Many lots we have to offer in from the section of the People’s Republic of China in the sale feature the Communist leader Mao Zedong, and the following article takes a quick look at some of the events in the life of Chairman Mao as told through the stamps that depict him in our upcoming auction.

Mao Zedong first appeared on a stamp from China in 1944, at a time when his Communist forces had been cooperating (for the most part) with the Nationalist Government for seven years against the Japanese forces invading China. By spring 1945, the Communists had taken over 678 out of 914 towns occupied by the Japanese and now ruled over 95 million people, but it wasn’t long before fighting against the Nationalists resumed. The Communists eventually overran China and on their way created regional administrative units each consisting of a group of provinces with their own stamps: Central & South China, East China, North China, North-West China and South West China. Lot 1085 (which has been withdrawn and will be re-offered in our December auction series as a used stamp) in our September 1st auction series is one of the earliest stamps to depict Mao, and was issued by the Hebei-Shandong-Henan border area in North China in 1945, and is a rare stamp in unused condition and scarce used. These stamps were sometimes rather primitive, but lot 1083 from the Shandong province in East China shows a more recognisable portrait. 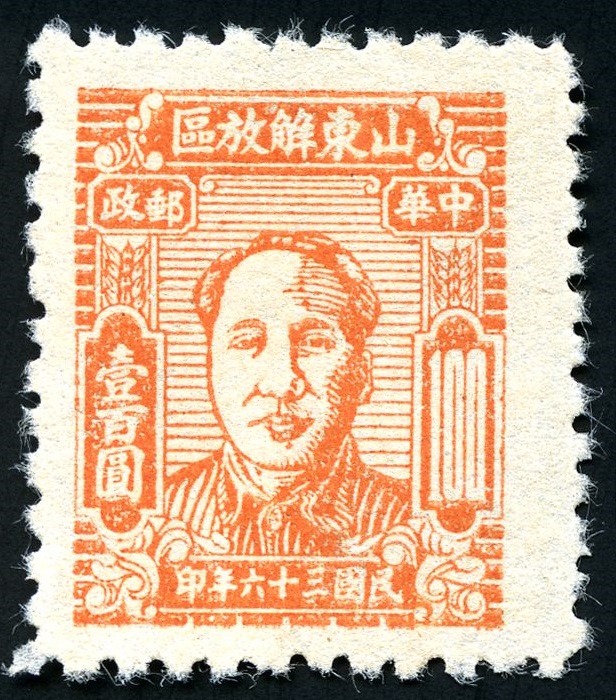 The People’s Republic of China was proclaimed in October 1949, and general issues for the whole of China were introduced. Mao appeared sporadically on the stamps issued until 1965, when suddenly several sets were issued to commemorative him, his texts and the Cultural Revolution. The 1965 30th Anniversary of Zunyi Conference (lots 1098 & 1099) features two stamps of him, showing a younger Mao and a portrait of an older Mao. At this Communist Party conference, a power struggle resulted in Mao taking over military command and becoming the leader of the Communist Party. 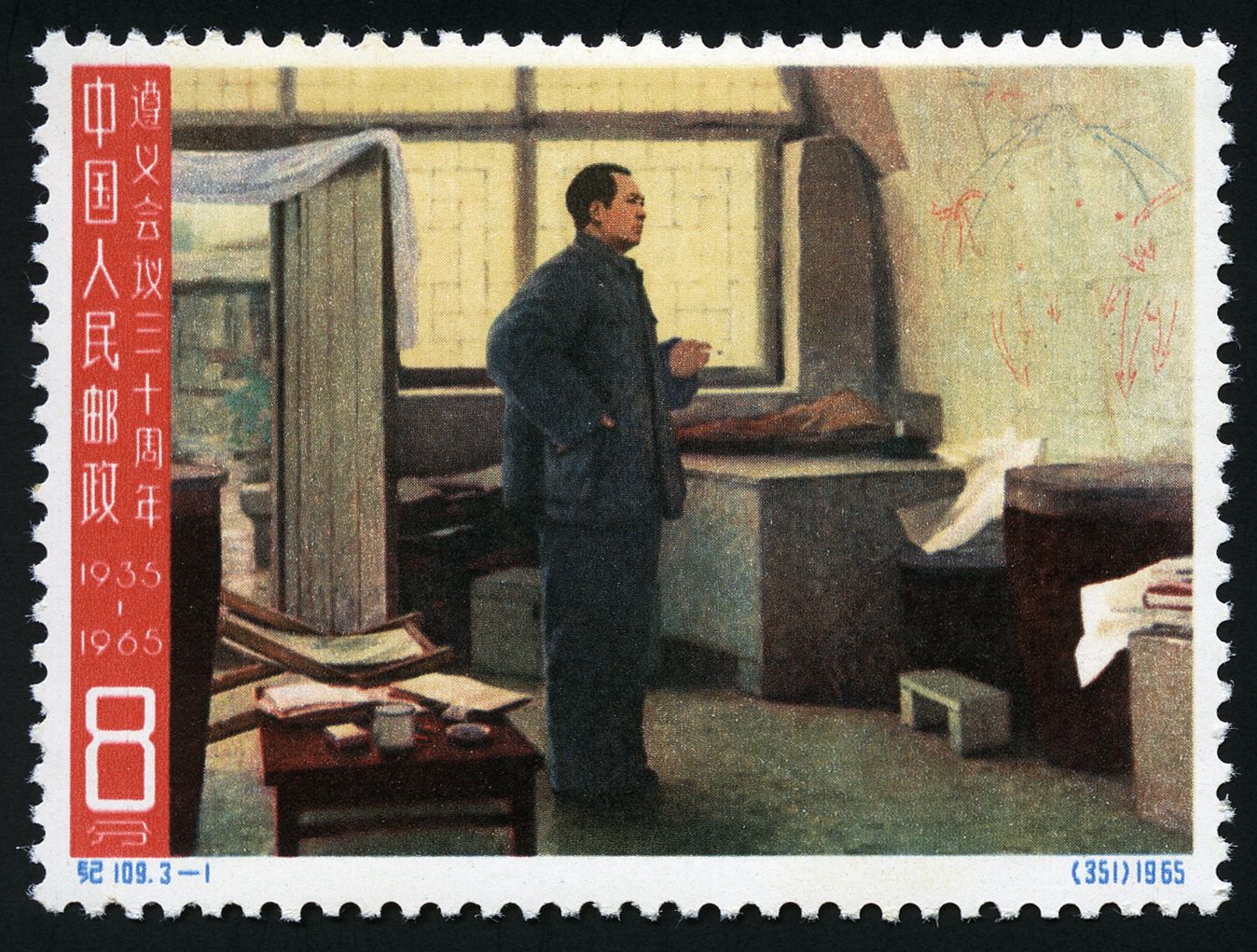 In 1966 his propaganda on stamps went into overdrive. The 1966 Cultural Revolution Games commemorative issue (lot 1102) depicts athletes reading Mao’s “Little Red Book”, or, to give its full title, “Quotations from Chairman Mao Zedong”. It contains 267 aphorisms from the Communist Chinese leader, teaching his Communist ideals. It was widely distributed during the Cultural Revolution, and with more than a billion copies published it is one of the most widely produced books of all time. 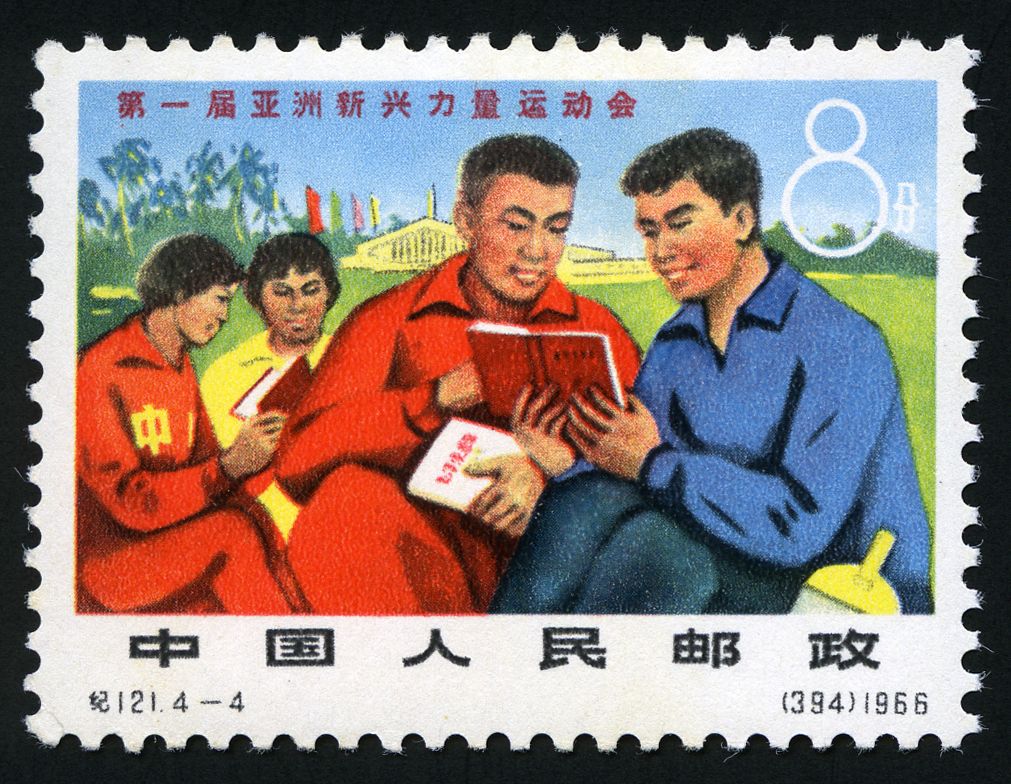 Several issues from 1967 and 1968 reproduce his writings on the stamps, including lot 1109, which is known as the “Thoughts of Mao” and is highly desirable set in the two se-tennant strips. As are the “Poems of Mao” (lots 1118 and 1119). Stamps from this set cover subjects such as “The Long March”, which was a military retreat undertaken by the Red Army of the Communist Party of China, which resulted in the ascent to power of Mao, whose leadership during the retreat gained him the support of the members of the party. However not all his poems were propaganda; it also features poems entitled “Fairy Cave”, “Swimming” and “Snow”!

“The Long March” poem by Mao, part of the set in lot 1118 in our September 1st online auction

Thoughts of Mao se-tenant strip with gold frame, part of lot 1109 in our September online auction

Lots 1126 and 1127 both have another popular se-tenant stip of stamps, called the “Directives of Mao”. Lot 1126 is a particularly desirable example as it is from the top left corner of the sheet, which shows the sheet number and part of the marginal inscription.

One of the last stamps to depict Mao is this period is shown in lots 1128 & 1129. It depicts “Chairman Mao en route to Anyuan”, which shows a 1967 oil painting by Liu Chunhua. A footnote is the SG catalogue states that used examples of this stamp are found uncancelled as it was initially decreed that postmarks were to be placed beside the stamp to avoid defacing Mao. The inevitable re-use of these stamps led to this instruction being rescinded.

After 1968, the stamps issued by the People’s Republic depicted the usual Communist themes, such as Chinese workers, industry and the arts, with the next stamp to depict Mao not issued until 1977; one year after his death. 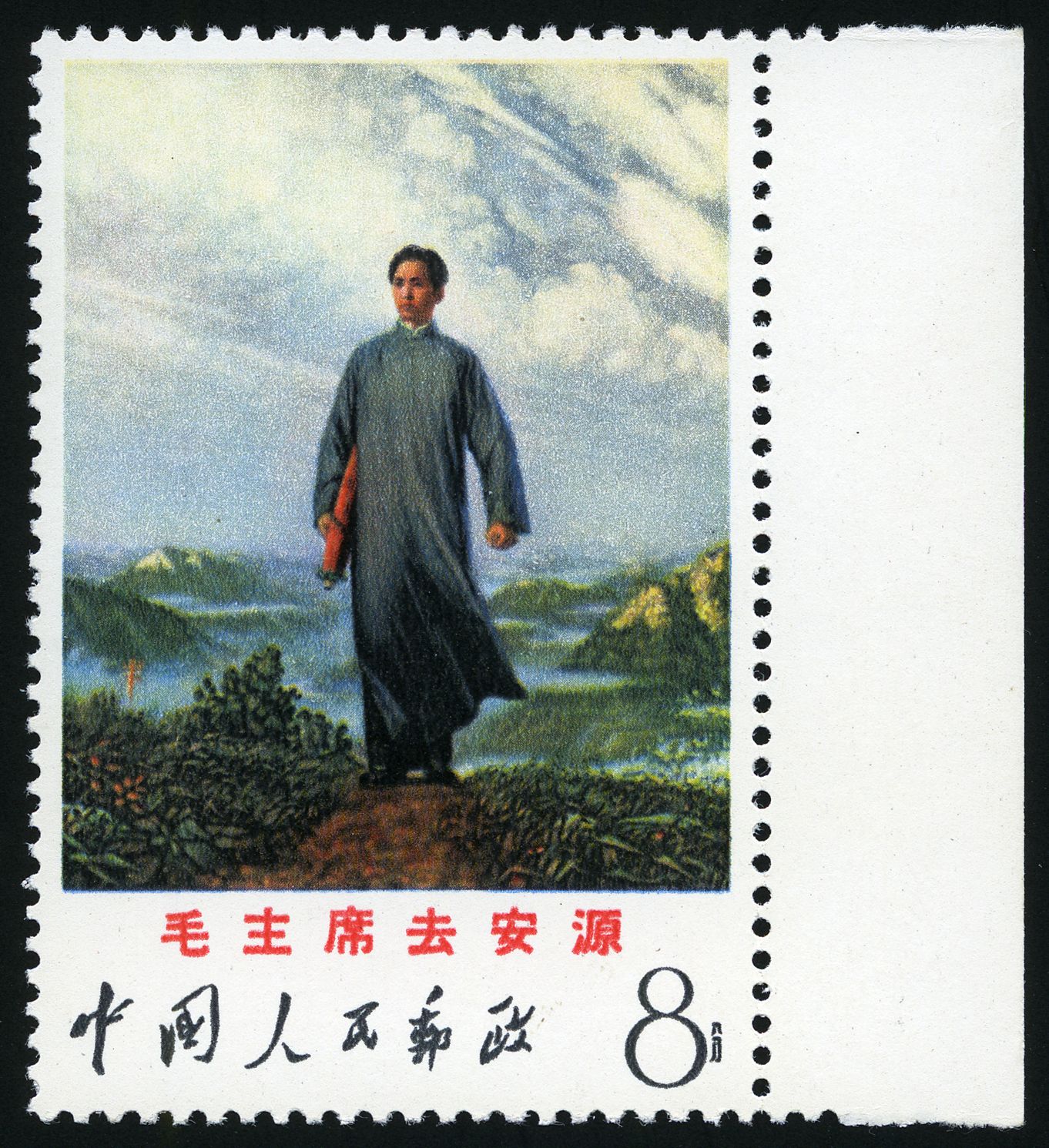