The best time of year to go on a Nile trip is apparently between October and April. The well informed reckon it’s not too hot then and given that the landscape of Egypt and surrounding areas, apart from the Nile Valley, is quite arid, the climate is similar to that of a desert. So some of the areas along the Nile can be a tad inhospitable.

Now, when taking a Nile trip, one of the important matters to ensure, apart from packing your suntan-lotion, is not to show up ‘late’. You can’t board a plane if you turn up too late and the river cruise boat would certainly have already disembarked on its merry way if you show up too late. So timing is crucial for any Nile trip. As we are about to find out.

However, it isn’t the end of the world if the unfortunate happens and ‘you’ are too late. Sure, you’ll be upset and disrupted but it won’t be the end of the world, and certainly won’t be as bad as it was in January 1885 for Major-General Charles Gordon, a British Army officer. Major-General Gordon, who was hauled up for the best part of a year in Khartoum Sudan, just down the road from Egypt on the Nile, was besieged by the Mahdi forces and crucially hoping the ‘Nile Expedition’, which was a British military force sent to relieve Major-General Gordon, would show up before it was too late.

Prudently setting off in ‘October’ 1884, the Nile Expedition, which these days is often referred to as the ‘Gordon Relief Force’, a rather odd description because they arrived too late to do any relieving of Gordon. Admittedly it was only a couple of days, which doesn’t sound that bad given the difficulties of transporting a small army with kit and provisions along the river Nile, but not only didn’t the Mahdi forces wait for their arrival, they’d been and departed, and horrifically left the inhabitants of Khartoum slaughtered, and yes poor Major-General Gordon was among them, although his head was nowhere to be seen.

The good news though, for us not Major-General Gordon, is this has left us with some compelling pieces of postal history from this rather exotic region and this unsavory incident.

Our featured cover (which is available in our upcoming Egypt auction) is an Officer’s envelope from the said Nile Expedition and doing a bit of splashing around you discover there are only 15 recorded covers that have derived from this British bob along the Nile and this one dated just two days before the news of the death of Major-General Gordon, and the fall of Khartoum on January 26th, had reached General Wolesley, who was the commanding officer of the Gordon Relief Forces, and at that point had arrived at Korti on route. 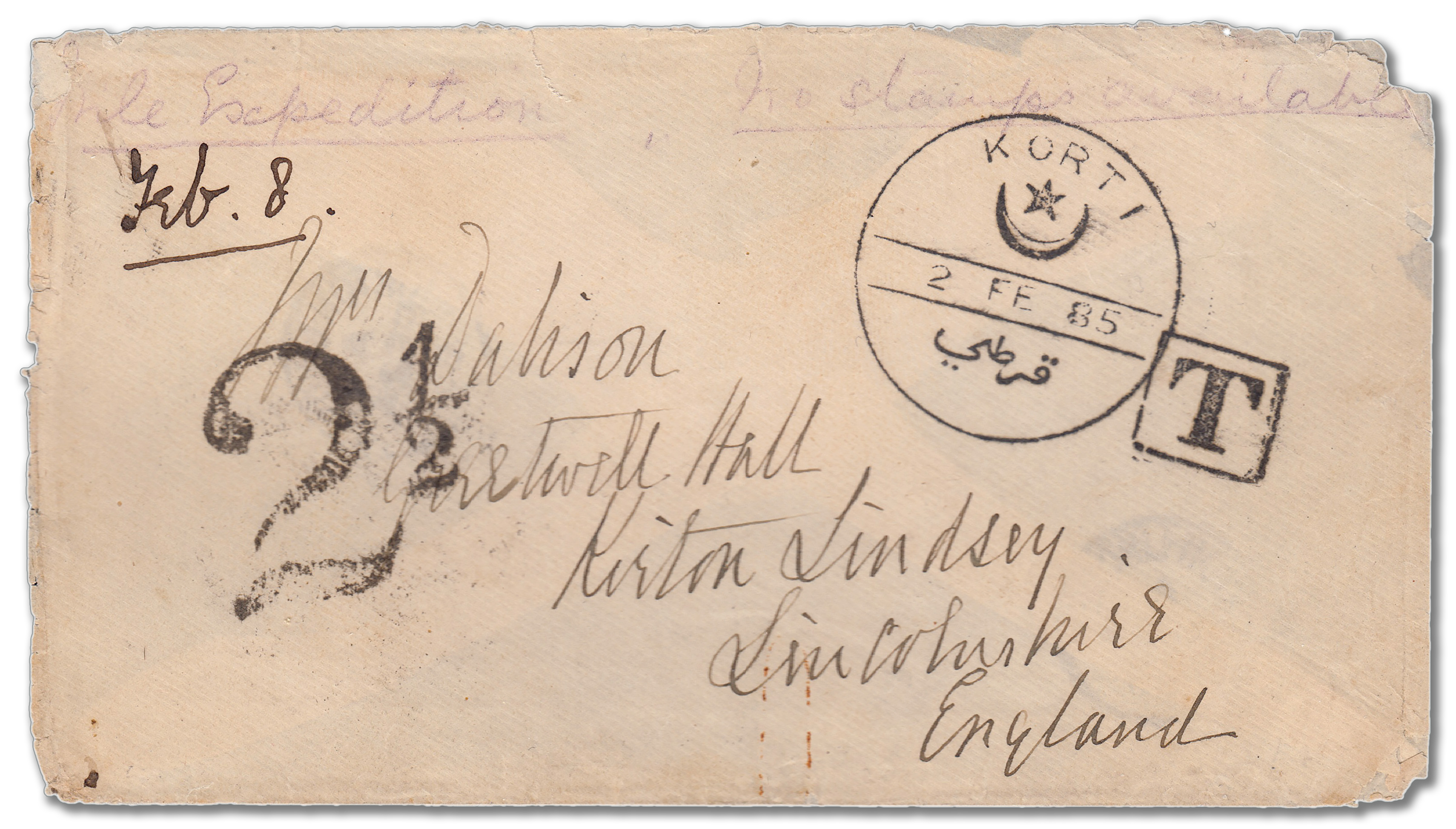 Apparently prior to this gruesome news General Woseley realised they were running out of time, and decided to hedge his bets and split his force into two, sending about 2,500 on camels humping across the desert and some 3,000 soldiers continuing to float on the Nile. Crucially one part of this latter group, commanded by a chap called Major-General Wilson arrived first, travelling in two Nile steamers, and were the cavalry so to speak who arrived in Khartoum on the afternoon of 28 January 1885. Obviously too late to do much but pick up the pieces.

Now as you’d expect this type of tardy punctuality isn’t very English and accordingly it caused some stiff upper lip quivering and quite a wave of criticism. Some blamed General-Wolesley, other Major-General Wilson and back in England there was a large swell of the public blaming the Prime Minister William Gladstone, who in their view hadn’t taken sufficient steps in time to actually do the relieving of Gordon in Khartoum. Some historians have put their oar in and blame Gordon himself because he shouldn’t have got entrenched in the first place, having been given instructions to secure the evacuation of Egyptian civilians and any loyal soldiers and skedaddle away from Khartoum pronto. Gordon decided to sit it out and sadly it’s too late for hindsight now.

Anyway, whoever is to blame it won’t alter the outcome and one person who did make it out is the sender of the featured cover and the author of a letter included within a similar cover from the same dalliance down the Nile, which is also available in our upcoming auction.

These two covers originate from a Lieutenant John Dalison who was an Officer in The Queen’s Own Royal West Kent Regiment. 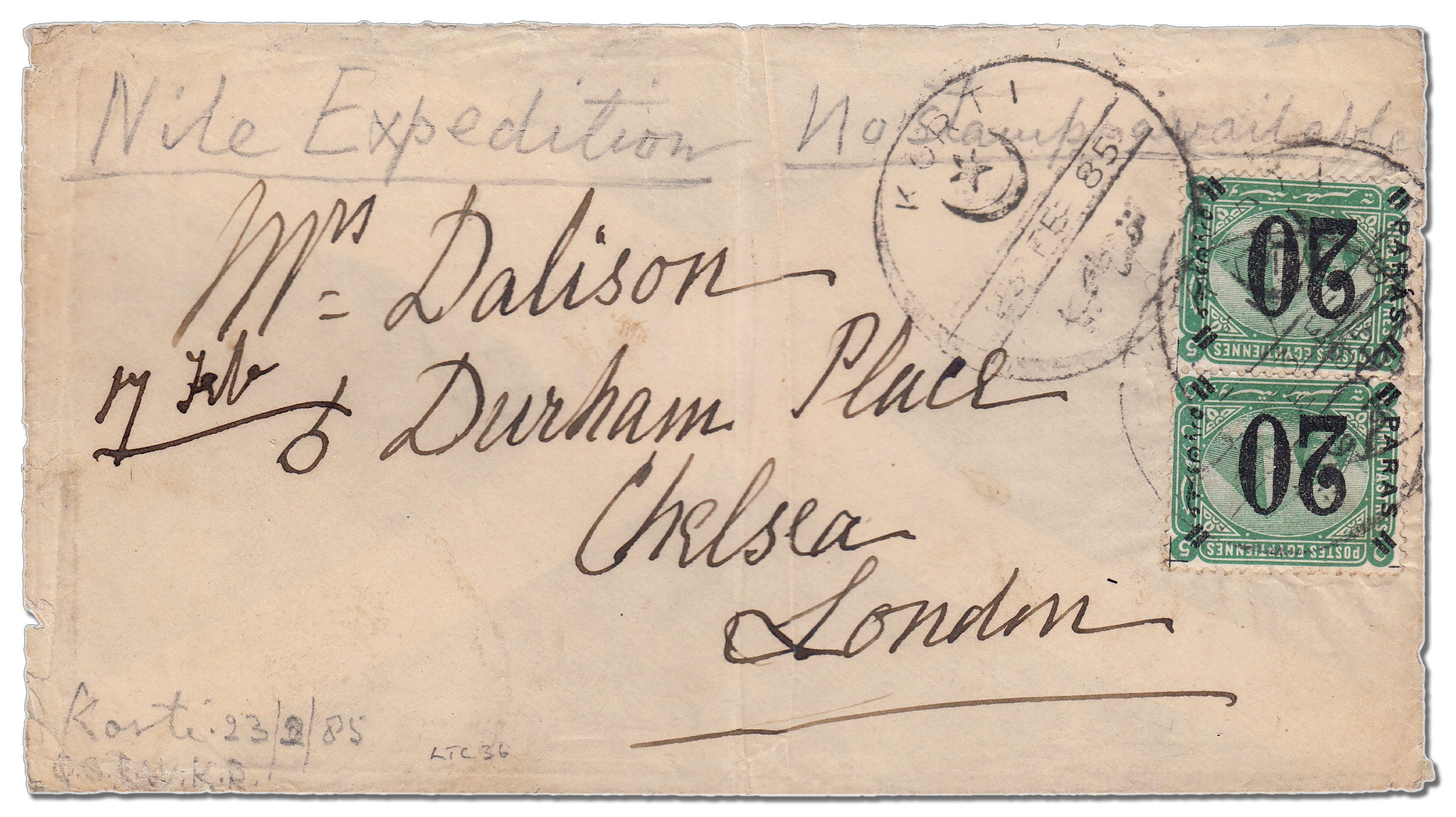 Dalison served with the 1st Battalion during the Nile Expedition of 1884-1885, and received the enticing Egyptian Medal with Clasp, and a rather handsome Khedive’s Star for his efforts, well done to him. However, despite these decorations it wasn’t a very pretty trip for our hero Dalison, because apart from the meandering to get to Major-General Gordon before it was too late, if you do some deeper splish-splashing you’ll discover some additional and most regrettable news Dalison had to take onboard once the British forces retreated from Khartoum to Egypt. His elder brother, Maximilian Dalison, was also in the region and a Lieutenant but serving in the Scots Guards on the Suakin Expedition, again all related to the English desire for transport links to the Nile, and he was Lieutenant Maximillian Dalison who was killed on 20 March 1885 at The Battle of Tofrek Hasheen. A rough trip in more ways than one for our Nile correspondent.

I know it’s too late now, but you do wonder if Dalison would agree with our well informed lot regarding the best time to take a Nile trip.  Probably fair to assume he’d disagree with the October to April consensus. Although he’d no doubt confirm some of the places along the Nile are a tad inhospitable.