The world of postal history tends to reflect the world at large. If a particular country has a less than exciting heritage it tends to have very little that catches the eye of the collector for very long. However, if a country has a rich tapestry of history then you often find the same is true of the stamps and covers associated with that region and thus collectors have plenty to captivate their imagination and lots to keep them occupied.

Indeed one of the greatest examples of this is Egypt. Sandwiched between Africa and the Middle East, with Europe and the Mediterranean sea in touching distance to the north, it has history dating back to the pharaohs, the fertile Nile River Valley as one of its main arteries, iconic landmarks such as Giza’s Pyramids, Great Sphinx and Luxor’s hieroglyph-lined Karnak Temple and Valley of the Kings tombs as it’s backdrop, it’s an exotic prospect. As is Egyptian postal history in general and especially covers relating to the Foreign Post Offices in Egypt and Egyptian Offices Abroad.  And to illustrate the point we have the next in our Egypt auction series from the collection of Joseph Chalhoub on the 14th June 2021, with 275 lots of  historical and iconic material, boasting a wealth of unique articles and landmark pieces.

This auction covers one of the juiciest periods in Egyptian postal history, when countries such as Austria, Russia, France, Great Britain, Italy, Germany and Greece had post offices based in this enigmatic location and dispatched mail to every corner of the globe. It was also when Egypt had post offices in Syria, Africa, Greece, Saudi Arabia and Turkey, the nineteenth-century being a hot-bed of postal history which produced stunning mixed country combination covers, rare post offices, unique frankings, mail sent by soldiers involved in wars and even Ballon Monté (Balloon Mail) coming into Egypt. And to give you a sneak preview we’ve highlighted five extraordinary covers which will float you down this great Nile of a topic, and provide a flavour – spiced obviously – of the offering, with many other exotic items and mystical correspondence to be discovered when the auction catalogue is available online in mid May 2021.

So, in order of appearance lot 10020 is an 1867 Austrian Post Office cover that has an extraordinary high franking, sent from Alexandria to Liverpool with a 160 soldi rate, which is quadruple the standard 40 soldi rate, and as such very rare. It also has a hefty Provenance to match the franking, boasting Alexander, Henry Houser, and Kurt Wolfsbauer as its past owners, all having had this cover in their collections at some point. The estimate for this cover is €5’000 – 6’000. Certainly worth weighing this cover up for your collection. 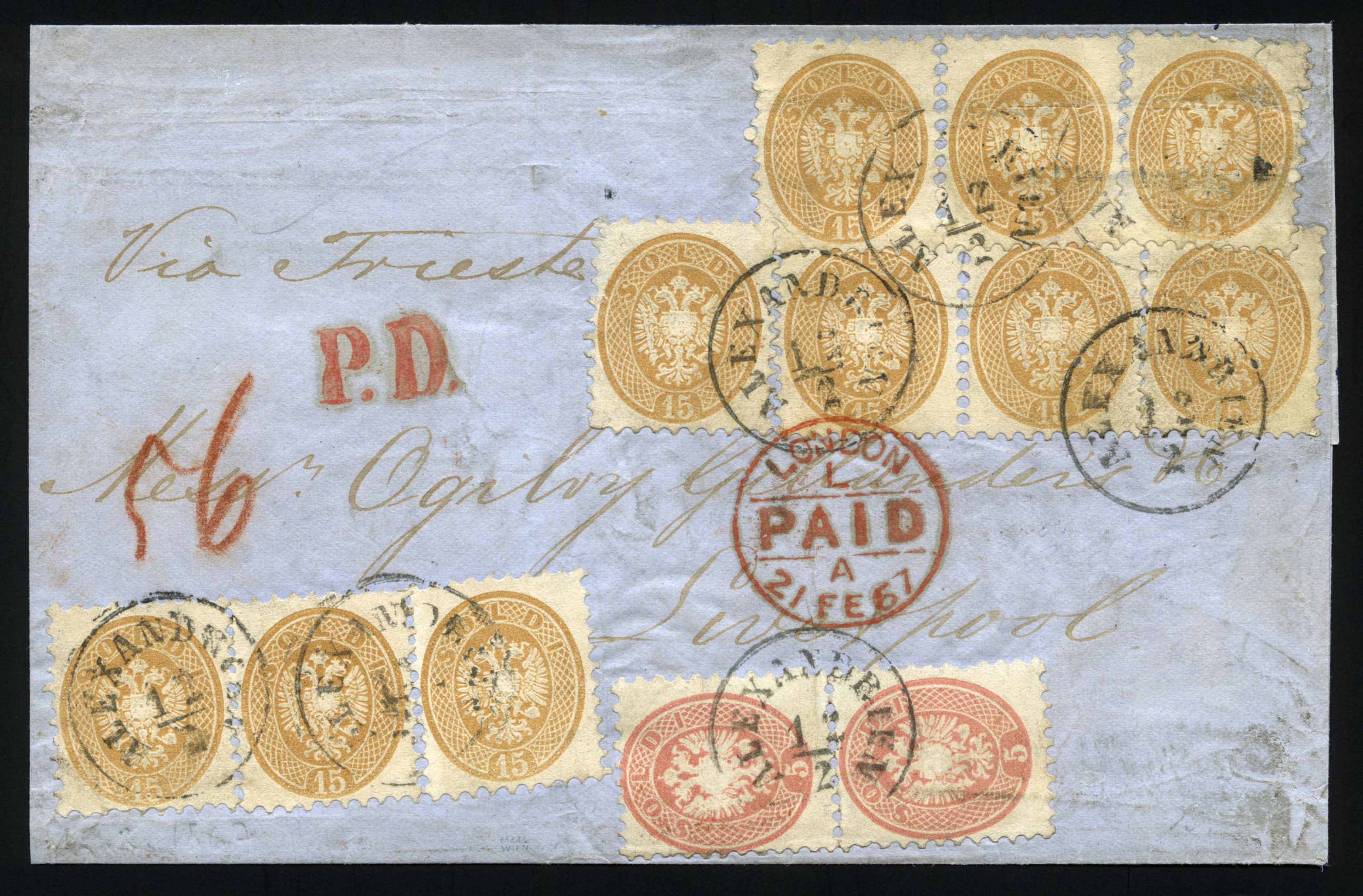 If you prefer to fly a little higher then here’s a cover with a bit of je ne sais quoi – lot 10102 features the fascinating and philatelically glamorous Ballon Monté – Balloon Mail – sent from the besieged city of Paris during the Franco-Prussian war of 1870, and coming, eventually, to its intended destination of Egypt. But not before it had been carried along by unfavourable winds and landed erroneously in Prussia being captured in the Germany town of Nassau. Thus interrupted on its journey, it endured a lengthy delay before making it back to Paris and then being forwarded, via several destinations, and coming down to earth with a few tax marks due to an increase in the rate to Egypt in the intervening period. An extremely rare usage, auction estimate for this fascinating cover is €5’000 – 6’000. Certainly worth floating the idea of this cover for your collection. 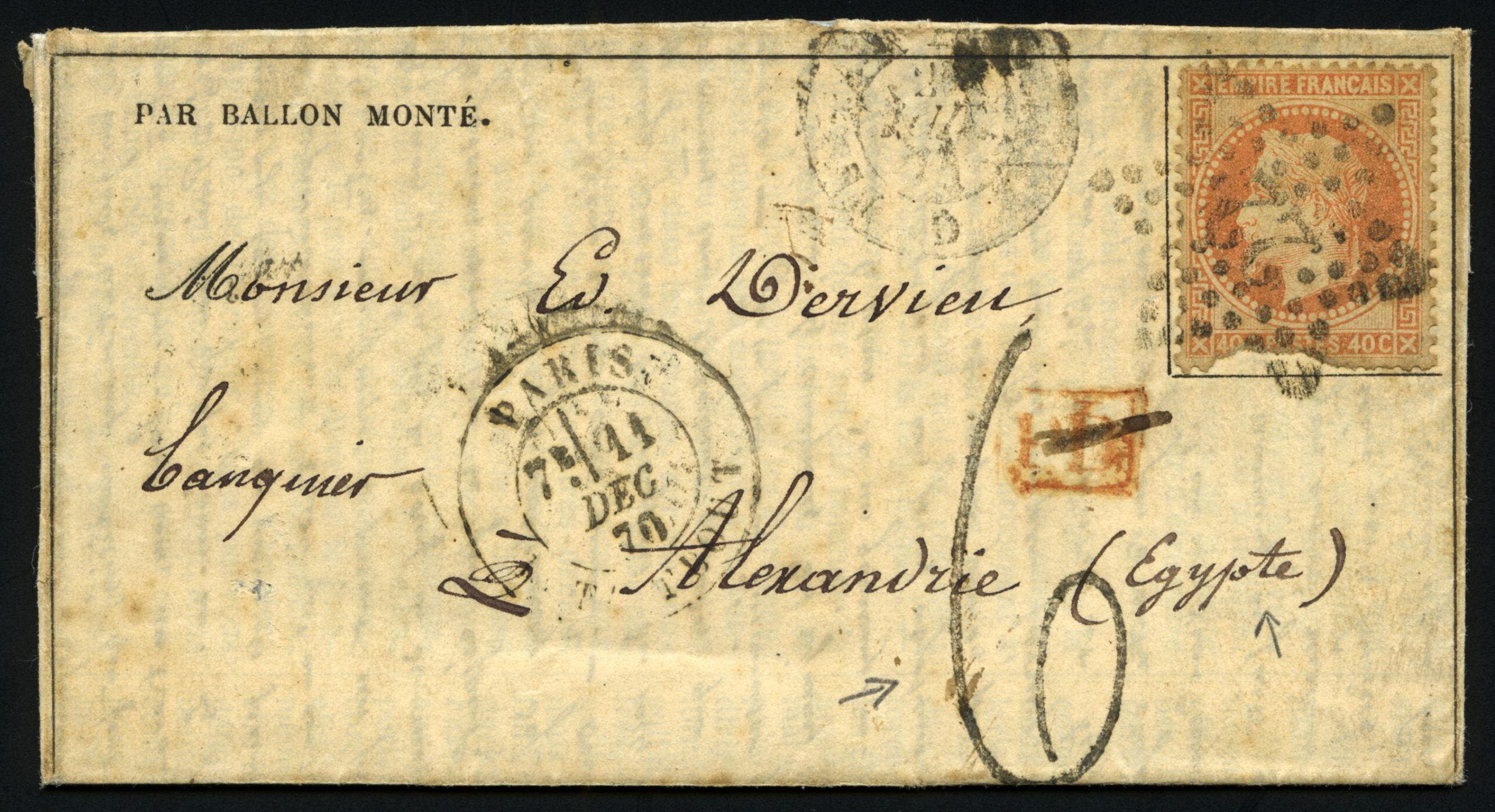 From the dizzy heights of Balloon Mail our next featured cover, lot 10104, arrives with the accolade of having the ‘highest’ known franking coming out of the Egyptian city of Alexandria. It’s an 1871 Registered envelope sent to Paris franked with an array of multiples of the France 1869 5f as well as the imperforate Bordeaux 20c and the perforated 80c Rose tied by the “5080’ lozenge, making a unique and as they might say in Paris ‘énorme’ franking of French ‘59.20f’. It has the added collateral of having been part of the collection of the eminent and world renowned philatelist Maurice Burrus and comes with a Vachat expert certificate dated 2009. The estimate is €9’000 – 11’000. Certainly a cover that will turn heads if in your collection. 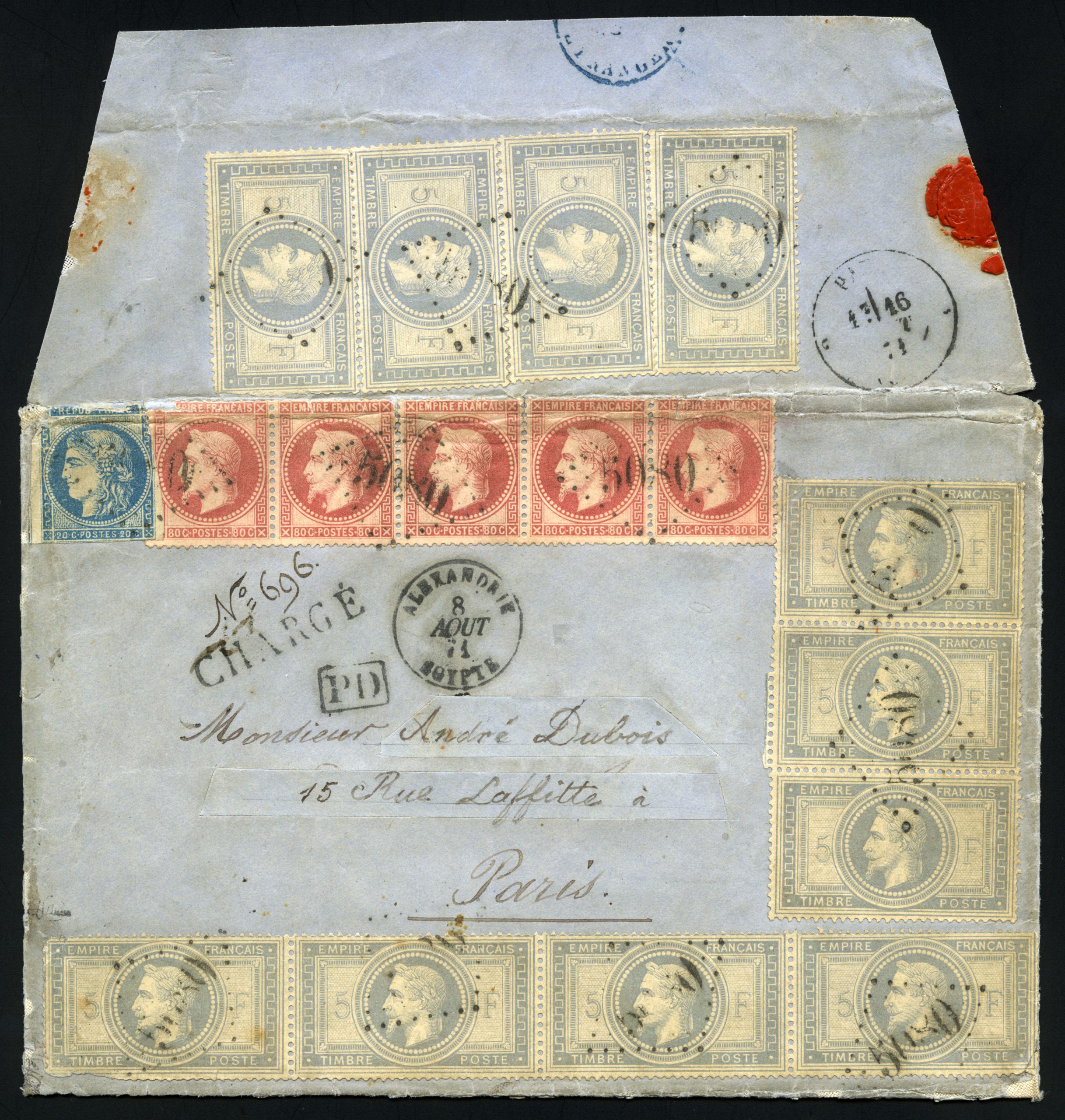 Steaming along we navigate to lot 10184 which is a rare use of the Russian ‘ROPiT’ stamps which appear upon a cover sent from the Russian Post Offices in Alexandria, Egypt. These rarely seen stamps derive their unusual name from the Russian Steam Navigation and Trading Company’s postal operations (in Russian: Russkoe Obschchestvo Parokhodstva i Torgovli) and this cover was sent to Beirut in 1868 and franked with a very fine strip of four 1865 ROPiT 10 pa rose and pale blue, with large even margins, cancelled neatly by the ‘785’ and triangle of dots of Alexandria. It is one of the finest known covers with this ROPiT issue and has the instructional marking for conveyance ‘Par Vapeur Russe’ (by Russian Steamer), a showpiece exhibition item which comes from the collection of M. Lipschutz and has an auction estimate of EUR 7’000 – 10’000. Certainly a cover that adds a cargo of rarity to any collection. 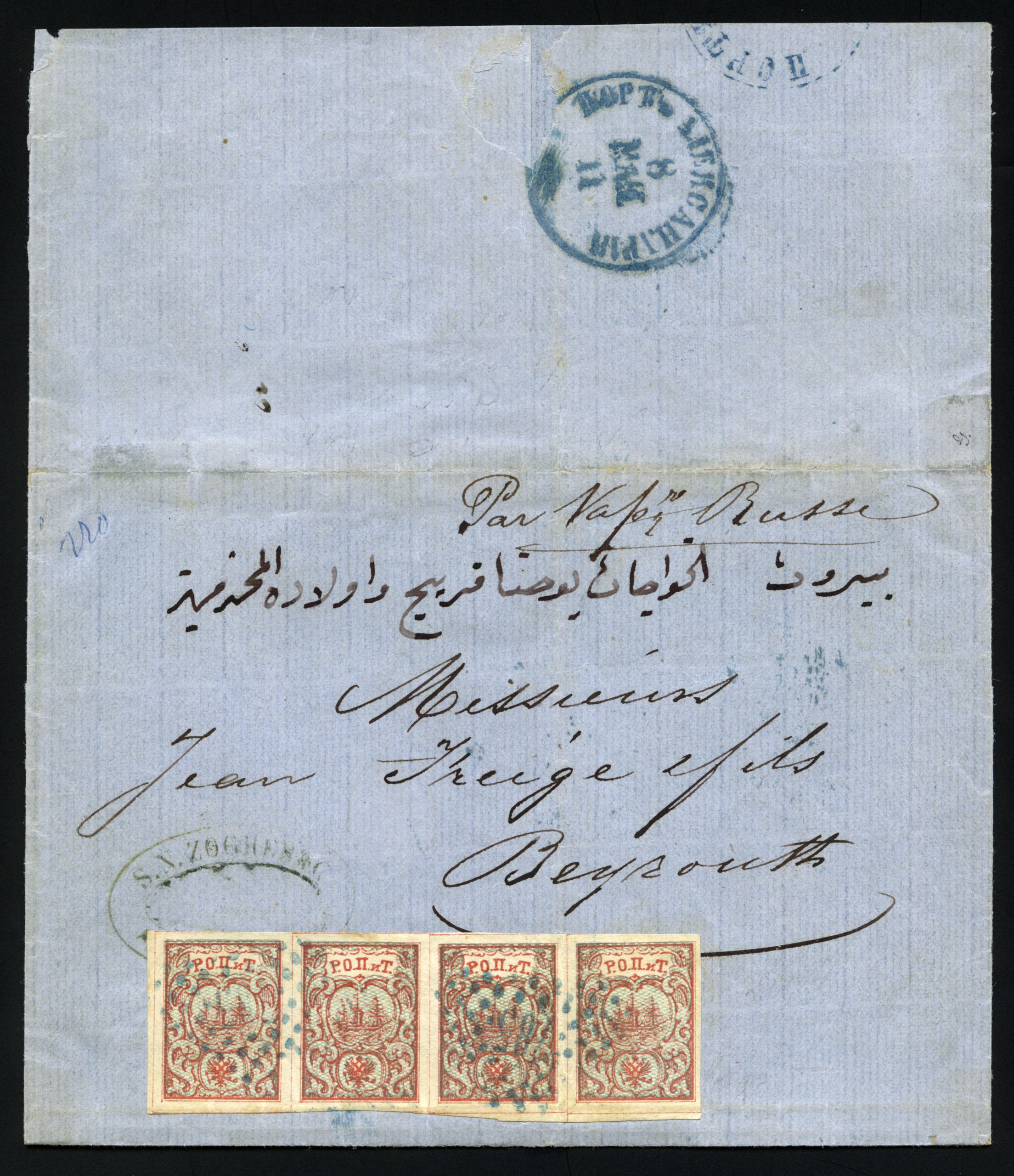 And finally, if you study Egyptian Post Offices abroad one of the most allusive and hottest locations is the Gedda consular office. Covers of any type are difficult to locate. As such, lot number 10215 is an important item of Egypt used in Saudi Arabia, an entire sent in 1869 and franked with the second issue 10 paras dull-lilac, making this undoubtedly one of the most sought after showpiece items coming from this rare post office and having the circular datestamp ‘POSTE VICE-REALI EGIZIANE / GEDDA’ clearly struck, adding to its appeal. The auction estimate is €9’000 – 11’000. This cover is certainly one which would quench a thirst for the rare and significant. 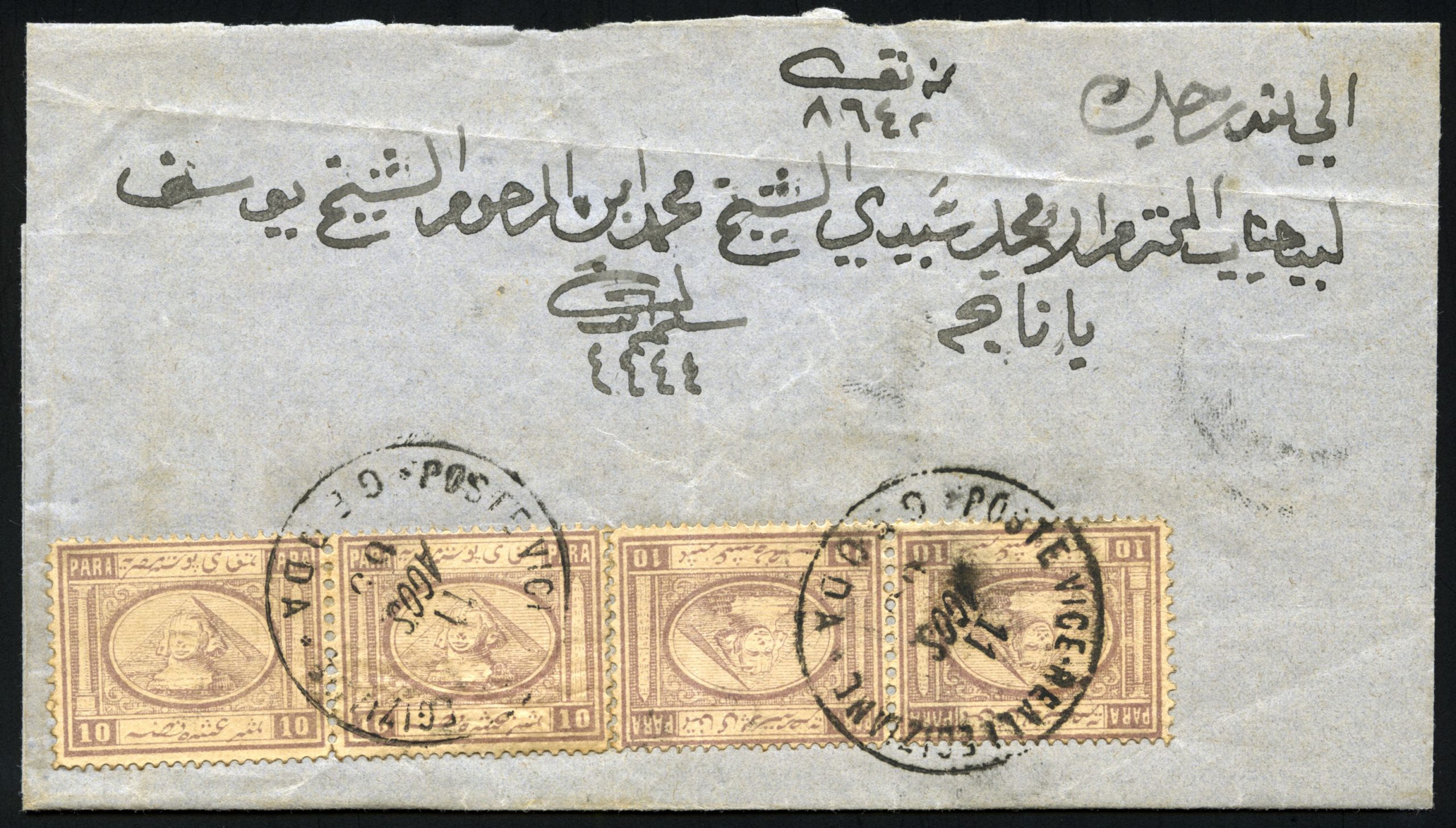 These are just five examples from the many standout items in the 275 lots on offer in this auction, countless of the lots have at some stage come from the well known Egypt specialist collector Kurt Wolfsbauer, but other legendary philatelists feature upon the provenance detailed in this auction such as; Pandelis J. Drossos, Wolfgang Achterberg, Emile Antonini, Samir Fikry, Lars Alund, Dr. William Byam, William C. Hinde, Maurice Burrus, E. E. Yates, Charles Fox, Peter Smith and Colonel Danson. A real who’s who of the world’s top philatelists. The calibre of the past collectors reflects the material and subject matter on offer. Egypt, and in particular the nuances of the Foreign Post Offices Abroad, has always captivated the very best philatelists.

Further details and the online catalogue will follow in the coming weeks.