The backside of a China Cover

In the last few weeks it seems that the news has been awash with stamp world rarities being cast into the limelight, and one in particular has caused a bit of fuss about what’s been put on the back of the thing rather than what we all tend to focus upon, the front. Well, that’s quite a coincidence, because take a look at the reverse side of this China 1881 envelope sent from Peking to Germany, through France, which judging by the three colourful effigies nicely placed on its backside, it will, in a similar manner, shortly be strutting down an auction red-carpet in our upcoming sale June 14th to 18th.

Now the thing is, what any self respecting postal historian would be keen to point out to us at this juncture, whilst pontificating about the merits of said item, is that mail posted from China during this period is in the part of the world where they were in the custom of positioning their postal adhesives, and marks, on the opposing side to the address, which conveniently – but not necessarily in consideration of – left the front available, and crying out presumably, for the Europeans to do what they were in the habit of doing and placing their little vivid graphic icons on the other side, by way of a contra-charge, and visually a counterbalance, and this was all for them doing their bit in getting this little gem of Imperial China through the French Republic and on into Allemagne, which was at that time the German Reich. 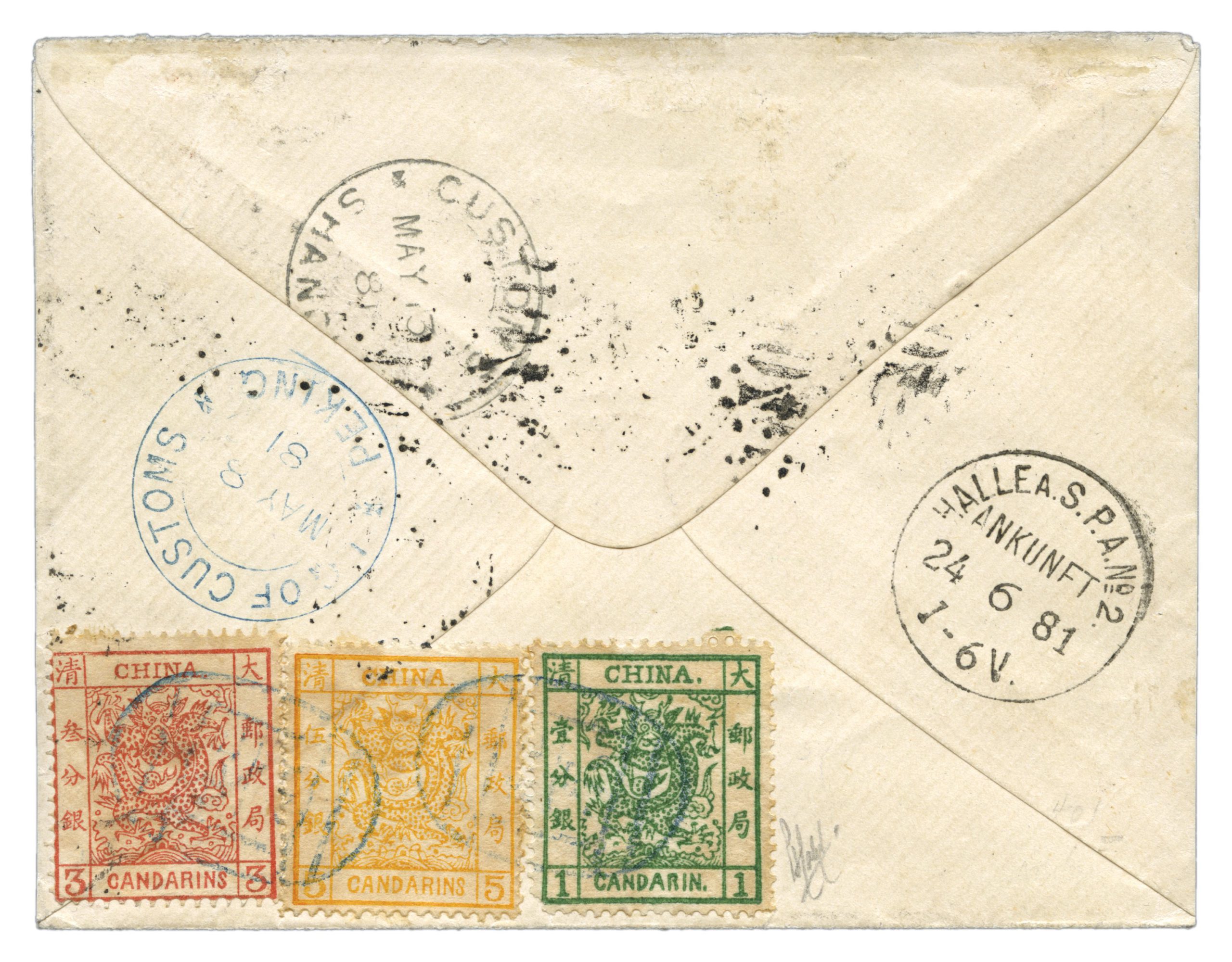 However, unlike any of the adverse publicity you might have heard this month about reverse psychology being applied to stamps, there is a much greater chance you’re going to appreciate what is decorating the rear of this item. It’s a full-set of the three 1878 Large Dragons of China, the 1 candarins green, 3 cardarins brown red, and 5 cardarins orange, which are Scott 1, 2 and 3, perf 12.5, unwatermarked thin paper. A rare combination and with the additional French 30 and 5 Centime franking to the flip side. Which oddly, much like the other philatelic rarity in the news, isn’t what gets all the attention being on the front of the envelope.

And in keeping with our satirical reflections upon the last few weeks, there’s a pencil mark scribed neatly on the rear of the cover, to the right of the 1c green, and that’s the distinctive miniature endorsement of Peter Holcombe, who up until his passing in 2012 was an active, well known and well respected, philatelic expert based in Switzerland, who gave many opinions and certificates on rarities of the world and who was in the habit of neatly signing his approval in this manner.

No doubt our featured cover passed through his hands when David Feldman SA last had this fine and attractive envelope for sale in October 1984 – Lot 40612 – when it sold for 15’000 CHF. It was part of the famed Giulio Mochi collection of The China Large Dragons. Mochi is a name synonymous with this issue and is often listed under the Provenance of Chinese stamps and postal history, especially early Imperial rare combination frankings. Holcombe and Mochi are here highlighted to emphasize the heritage of the cover which without doubt stands on its own merits, with or without them, but as we’ve often seen it adds to the story and credence of an artifact. It also provides an insight into the customs and habits within the hobby which form part of its onward journey from the German Reich. 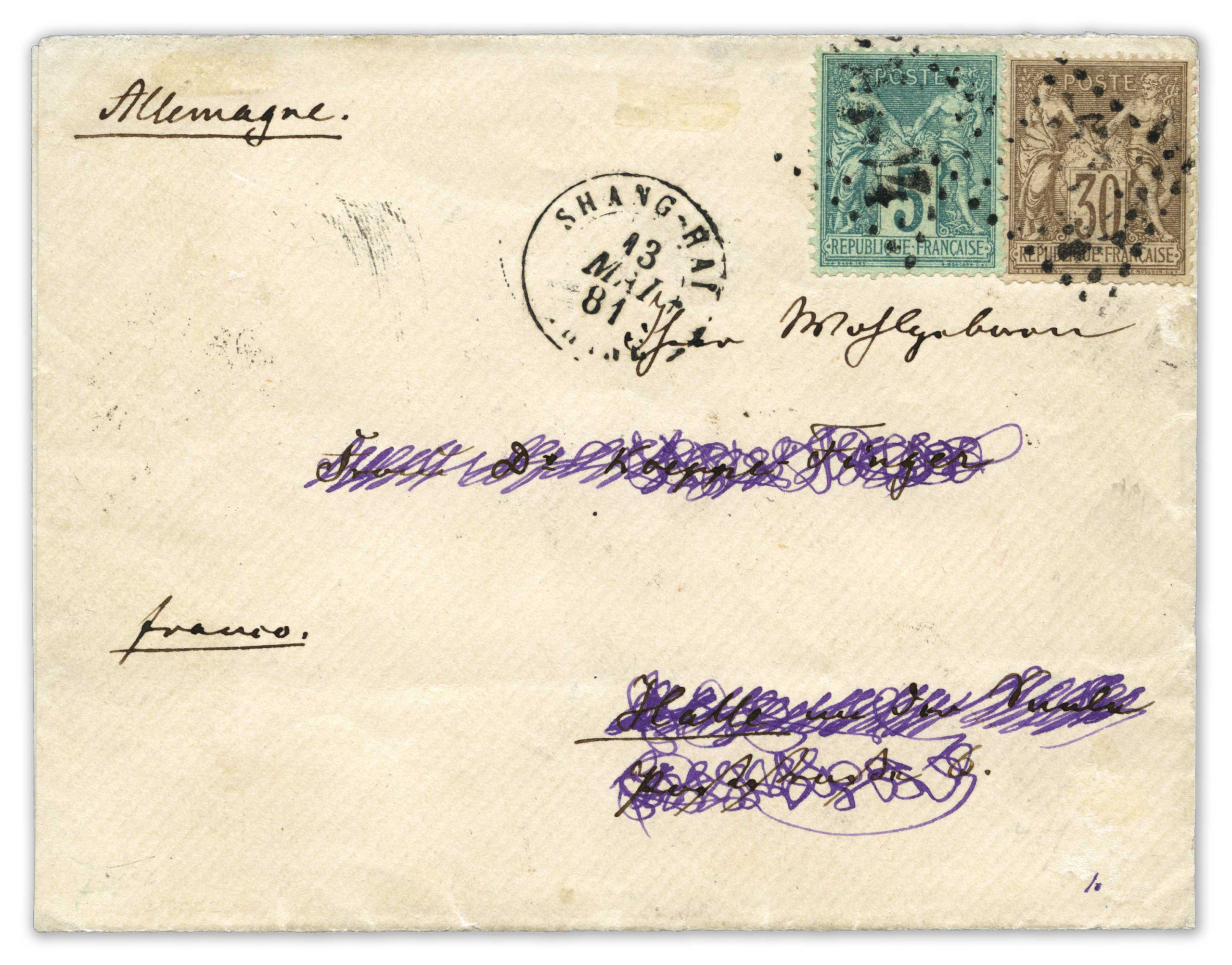 A journey that today has brought the envelope to our specialised catalogue, China including French and German Post Offices, which will be out in May when you’ll be able to ‘mark-up’ your bids. And lastly, but by no means the end of the tale, to add a touch more stage lighting, it comes from the collection of Max Mayer, who coincidentally is a noble collector and philatelic expert. We seem awash with these symbolic connections. The question is, would you leave a mark of your own, in pencil of course, on the backside of a China cover?

Further reading on this interesting China issue in The Crown Jewel of China – A Fairy tales Cover.