The Quantum Science of a Stamp

In the world of philosophy and indeed specifically science, they talk about ‘objective reality’. It apparently means that something is actual, or it exists independent of the mind. So in simple terms an objective reality is a universal truth that can be demonstrated by a process of systematic experimentation. In 2019 a bunch of very bright quantum scientists demonstrated through some very smart experiments that two realities can exist. Apparently, two imaginary scientists conducted an experiment on the same thing and got two different results both of which were scientifically correct. This suggested there is no such thing as objective reality. Without getting too deep and not having the intellectual prowess to delve into it much further, this strikes me as a bit of fuss over nothing.

You see you don’t need an elaborate quantum experiment to demonstrate that two realities exist in the stamp world and they can exist alongside our objective reality as well. We can illustrate this little nugget of truth in about 600 words. For starters, in law or legal systems, it’s commonplace to have two realities, or to be precise, de jure and de facto, that is ‘in law’ also known as ‘officially’, or ‘the reality’, better known as ‘the fact’. Meaning you can have something established in law as the legal fact – de jure – but the reality can be the actual fact – de facto.

And our 1901 Rhodesia £100 Cherry-red mint stamp here is a fine example of this two realities stuff. The first reality is that in 1901 if you went to buy this stamp over the Post Office counter you would have had to handover £100 in paper money, which if we do our inflation sums today is about £8’500, which is not to be sniffed at. It’s a lot of cash, and that is our de jure reality today. But back in 1901 the world of money had another reality to all this paper and that was the gold currency value. If we walked into our post office in 1901 wanting this stamp, the reality in effect is that it’s worth was nearer £29’000. Now that’s a staggering sum. It’s an obscene amount of money for a piece of paper, but it is our de facto reality. 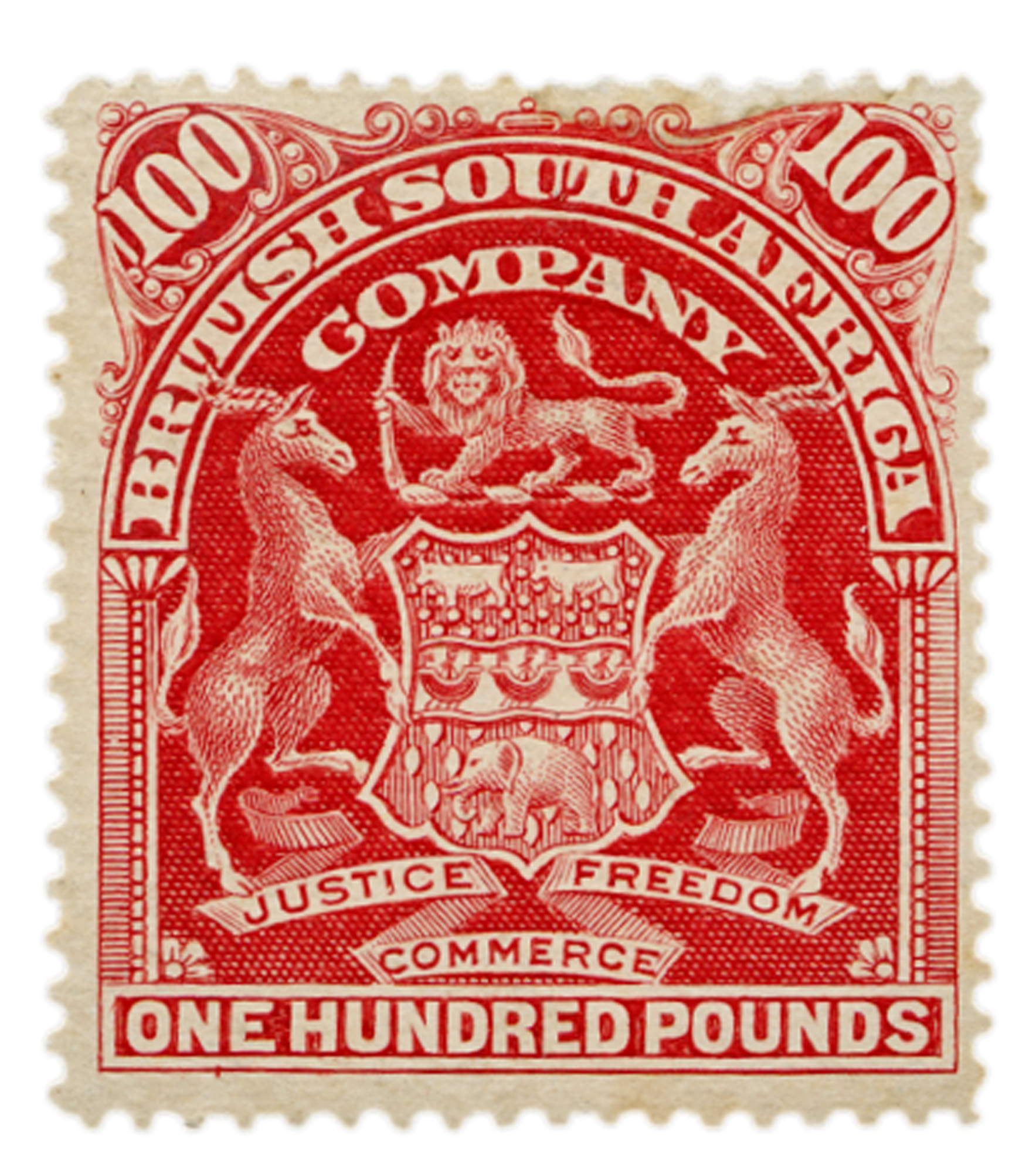 That’s how you get a £100 stamp to be in two different realities – £8’500 and £29’000. What if I told you we can have a third reality? Let’s rewind to 2011. Thursday 8th December to be precise, and instead of walking into our 1901 post office, take a step into the auction room of David Feldman SA, in Geneva, Switzerland, and there on the counter, or table in 2011 realities, is our Rhodesia 1901 £100 Cherry-red mint stamp. Do you want to know how much it will cost you? Not £8’500 or even £29’000. No. The reality is that it would set you back EUR 120’000.00. That was the hammer price for this rather juicy red stamp. It is the rarest high value stamp of the British Commonwealth and at the moment the hammer came down on our £100 stamp it set a world record. Fact. Or in de facto terms it became the new reality.  And on the 8th December 2011 £1 GBP was equal to €1.1717. You can do the sums. The truth is a £100 stamp took a quantum leap in value between 1901 and 2011 and demonstrated that whether you’re a philosopher or scientist you can’t rely on objective reality to give you the value of things, especially stamps. But the great news is that in the world of stamps we know when something really does exist.  This piece of British South African philately is one of two that exist in mint condition. Is that not an objective reality? Maybe us philatelists are smarter than we think, or perhaps we are a bunch of philosophers and never realised it.