No philatelists ever wants to draw a connection between bird excrement and a rare 1858 Peru cover franked with a ‘Medio Peso’ error of colour, estimated at 20-30’000 EUR (lot 61683). However, the fact is without ‘guano’ which is the accumulated waste from seabirds and bat droppings, which during the 1850’s became the most significant export from Peru to Europe, there is more than a splattering of a chance we’d not have such a wonderful cover to ogle at. Firstly, if you’re wondering why guano had an attraction to anyone, it is because as a manure the bird byproduct was supremely effective as a fertilizer. In the 1840’s the Peruvian government negotiated a deal with merchants from Liverpool and France for the export of this soil enriching dung. It brought about an extraordinary economical and political turnaround from the turmoil and stagnation which had, up til that point, halted development in Lima their capital and across the new Republic of Peru. In a fluttering of years this pungent doo-doo became the country’s largest source of revenue, bringing about social and financial change, one of which was the obvious uplift in business with Europe.

The cover in question was sent from Lima on March 12th 1858 to Paris, and the recipient Luis Mesones was in fact a Peruvian lawyer come diplomat and at the time of this rare piece of postal history landing on his desk he occupied the position of secretary of the legation in France. Now, there is no doubt that Mr Mesones’ duties probably had more facets to them than discussing muck, or more pertinently ‘le fumier’, but the prosperity enjoyed as a result of the guano craze undoubtedly gave any political and commercial representative from Peru a great deal more gravitas in their dealings, even if part of the discourse was not the most savoury.

However, pre the rise of fertilizer sales the diplomatic links between Peru and France were relatively lowkey, and our man Mesones after plopping this fabulous cover in a safe place for later discovery, as the only example with the error of colour on a overseas-destination cover, went on to manage the business affairs of the Holy See which is the seat of the Bishop of Rome, and then went to England as plenipotentiary minister – that being a posh way of saying envoy or minister – so like the Medio Peso in red instead of yellow, there was just a short break in the philatelic cloud of opportunity for this cover to soar through into the obviously prudent palm of this legal man from Lima who found himself in Paris. Not to mention that whoever released it in March of that infamous red year of 1858 was swift out of the rocks as this is also the earliest known usage of this variety. Now one of the other rather unpalatable tales which shares a link with this plant growing nutrient rich export is there are some out there who have said that it was a cause of the particular strain of potato blight from the Andean highlands that began the Great Famine of Ireland. That is the unpleasant episode which reportedly killed a million people.

But, as Mesones isn’t here to be ambassador for Peru, then we shall fly in and make the point that the precise origin of the pathogen that is associated with the strain Phytophthora infestans, which is widely thought to be the ‘blight’ responsible, has been traced to Mexico. Now it may well have floated south towards the coastal area that launched this unique error of colour on its journey to the east, but that’s just conjecture. What is less of a supposition is that Luis Mesones did us all in philately an enormous service whilst in Paris even if from time to time he had dealings with the less glamorous Peruvian export known as bird excrement, as well as what is today one of the great philatelic exports from Peru, although he wouldn’t have known then quite how special this particular Peruvian international mailing would later become. 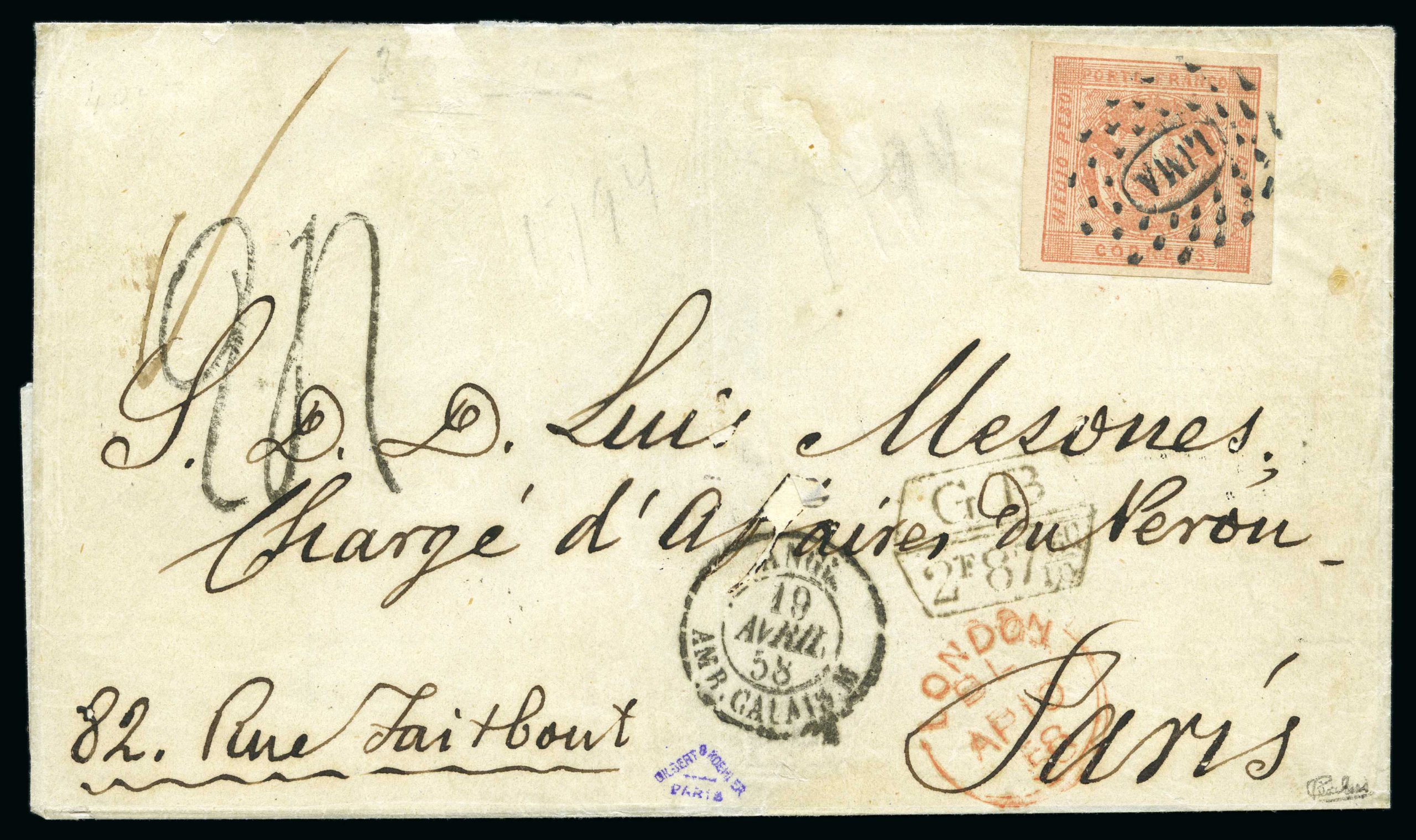 1858 (12.3) Double rate cover from Lima to Paris, franked by 1858 ‘Medio Peso’ red ERROR OF COLOUR, with good to large margins, neatly tied by oval LIMA in dots, with framed “GB2F87 5/10C” accountancy marking, London & Calais transit all alongside, and additional “24” arrival rating, Callao transit backstamp, some minor cover faults mentioned for accuracy only, an important exhibition showpiece and the only known example of this famous error of colour on an overseas-destination cover, as well as the earliest usage known of this variety;

This is one of the 288 lots that include many scarce and rare items in our upcoming Latin America auction Thursday 17th June 2021.