There’s been a bit of a technological revolution going on over the last year. Commercial and domestic life adapting to restrictions has meant the acceleration of certain internet technologies and businesses. Of course there have been casualties, many of them on the high street. And technology isn’t always used in the correct manner, which results in casualties too. This week in the news there were two incidents of drivers of the high-tech Tesla car misusing, or perhaps just misunderstanding the limitations of the ‘autopilot’ function on the vehicle, one with disastrous effect. Of course social-political revolutions have a bit of a track record of producing bloodshed on a much larger scale than a fatality from a road traffic accident. Countries such as France, Russia and China spring to mind, all which had revolutions that resulted in human loss on an unimaginable, and often uncalculated scale. Of the three countries mentioned they all, at one time, had another thing in common. Post Offices in China. And indeed prior to the War of Liberation so did Japan. Our upcoming auction of China, including Japan, with a particular focus upon the Foreign Post Offices, gives more than a glimpse of the changing social, economical and political face of this fascinating country, through the stamps and postal history assembled by the recognised expert in this genre Max J.Mayer.

In flicking through the catalogue you do wonder what Mao Tse-tung would make of the popularity of the postage stamps from the People’s Republic of China 1968 Cultural Revolution issue which feature his Directives. On the one hand the attention they command is undoubtedly pleasing and it’s certainly one way to spread the propaganda. But then again one of the objectives of what was formerly called the Great Proletarian Cultural Revolution, was a sociopolitical purge, and if truth be known it was a bloody and violent affair that sought to rid the country, amongst others things, of capitalism. So, at the risk of stating the obvious, he probably wouldn’t be that chuffed that an unmounted mint block of twenty from the foot of the sheet with the se-tenant strip of five is featuring in our upcoming auction with no reserve and estimated at €8-10’000 (lot 40100). Not even the philanthropic nature of the availability of this rarely seen large multiple, which has been generously donated so the proceeds go to the humanitarian activities of Medicines Sans Frontières, would improve its odds of gaining an affirmative edict from Chairman Mao. 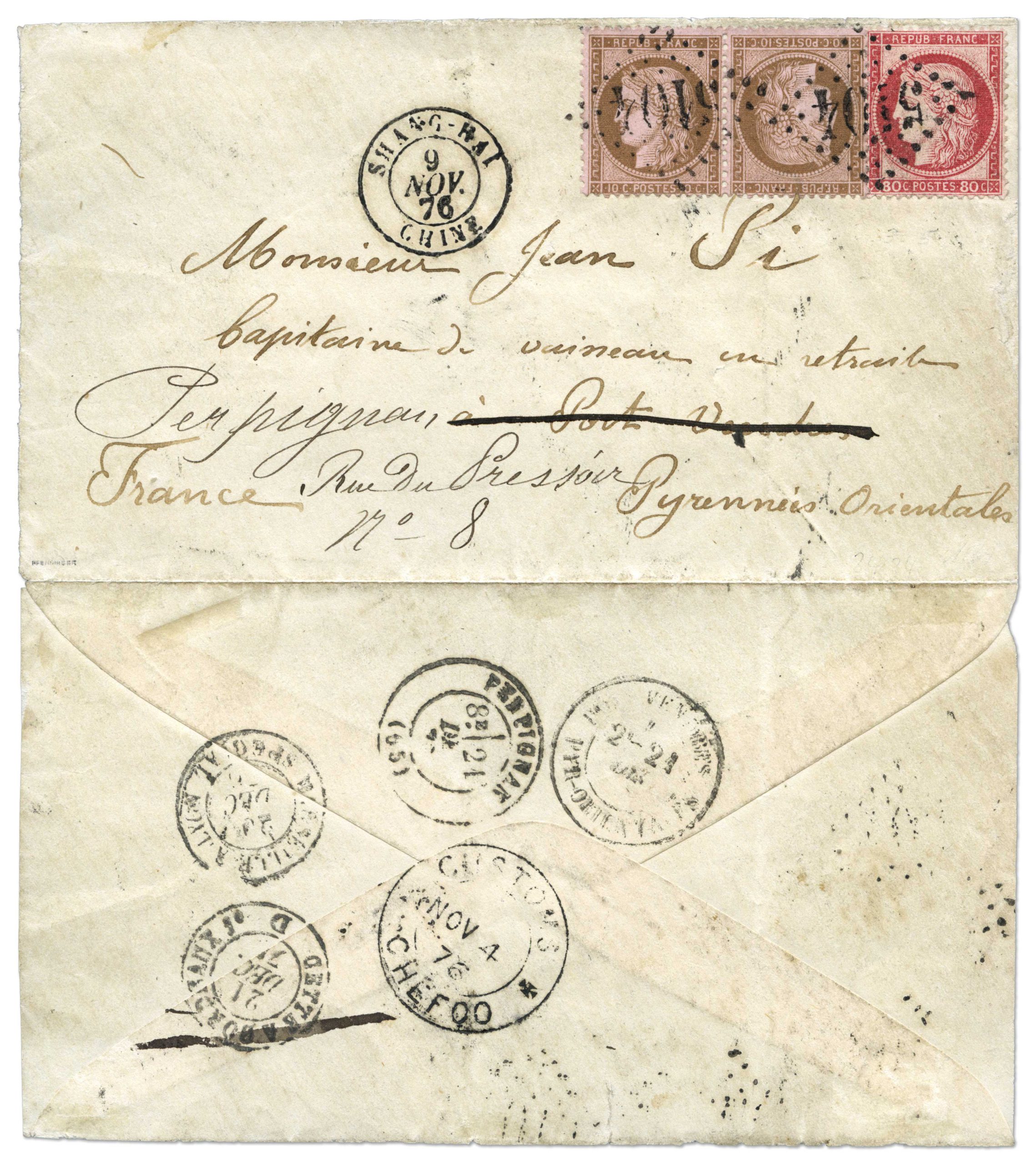 Mind you, history doesn’t have much in the way of an assenting nod the other way, what with the cleansing of the class ranks during the revolution. It’s a tumultuous tale in the varied chapters of change in China, which these stamps aptly depict so well in their colour – being red – reflecting the social and political shift of the time on many levels.  However, there was a period when life was a tad more cosmopolitan, or international so to speak, in China and despite them not having their own postal adhesives until 1878 they did have a French Post Office in China from 1862 right up until 1922, which produced both colourful and equally iconic snapshots of civilization. No cover perhaps illustrates this better than lot 40132, an 1876 envelope franked with the French ‘Cérès’ 80c and an 1871 10c tête-bêche pair, tied by the Shanghai ‘losange à gros chiffres’ “5104”, the rare tête-bêche in combination with the earliest usage of a Chefoo Customs mark makes this the most important cover of French Mail in China.

It’s unquestionably a top pre-stamp rarity for the advanced collector of China, which Yvert catalogues, just for the French franking alone, at €25,000, and comes with a 2021 expert certificate from J.F. Brun signed by Pfenninger. And as this cover preserves a unique moment of Chinese philately, postal history that feature the Imperial China Dragons in combination with foreign adhesives provide that other dimension of cultural shift, one example of this is lot 40141, which has a 3ca rough perf. (Chan 11) Large Dragon on thick paper used in conjunction with the France Type Sage 25c bister and yellow, sent to Le Mans, redirected to Mont Cenis. The Chinese adhesive on the reverse, as was the way of things, and the French applying their payment to the front. 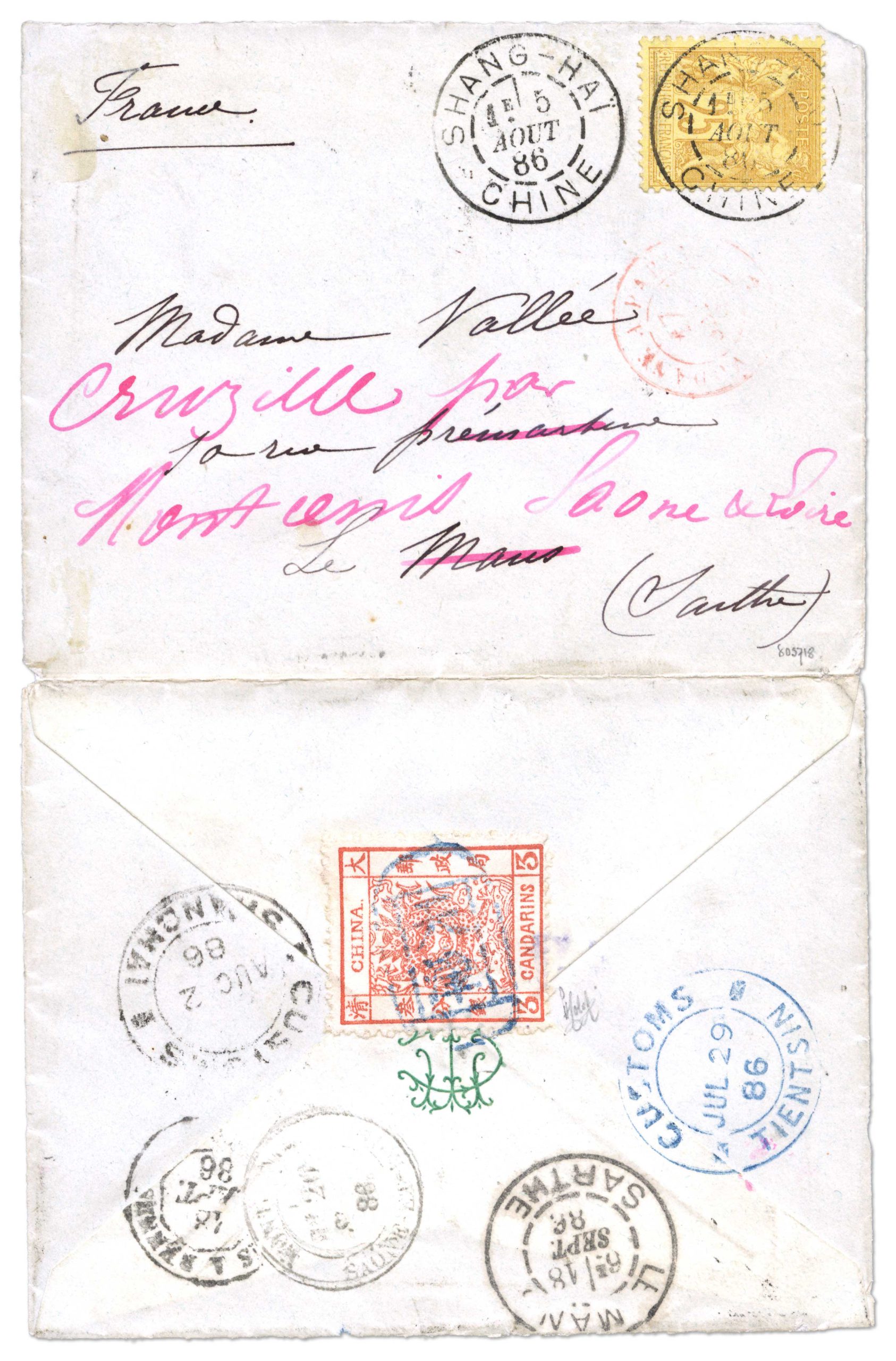 Now whilst the Russian Post Office in China opened up at the beginning of 1870, their office in Port Arthur got going a bit later in 1898 and one of the earliest known uses of a 3k stationery card (lot 40226) uprated with the Russia Arms 1k for the overseas rate, and sent to Hamburg is a rare combination with the postmarks in China and was once in the collection of the eminent Russian specialist collector Raymond Casey. 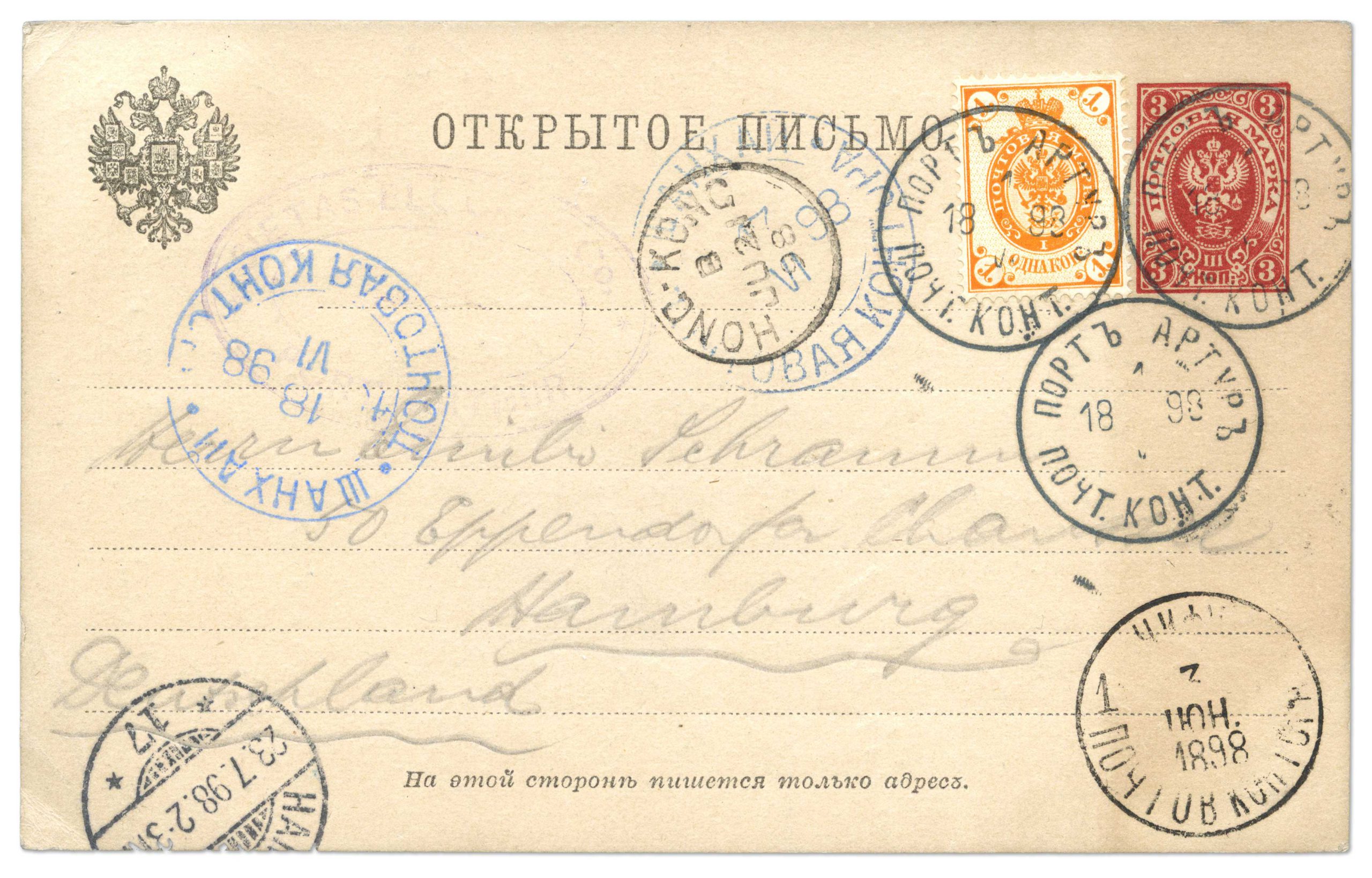 Of course, Port Arthur is sadly better known for the massacre that occurred there in 1894, during the First Sino-Japanese War. And having brought Japan into the mix it is worth pointing out two eye-catching covers from the French post offices in Yokohama and Tokyo respectively. The first an 1876 cover with the extremely rare usage of the imperforate ‘Bordeaux’ 40c in combination with an ‘Empire Laureated’ 80c tied by the ‘5118’ numeral which was the lozenaged used in Japan (lot 40286). The second is an 1875 French Military Mission envelope that unusually has a Japan 1874 2s with syllabic (Michel 20x, Scott 34) from plate 21, paying the single internal rate from Tokyo to Yokohama, and attractively used in combination with perforated French Cérès’ 25c and 80c (lot 40289), interestingly the letter was posted at the Shimbashi Station and illustrating the first railway station postmark in Japan, sent to Lyon. 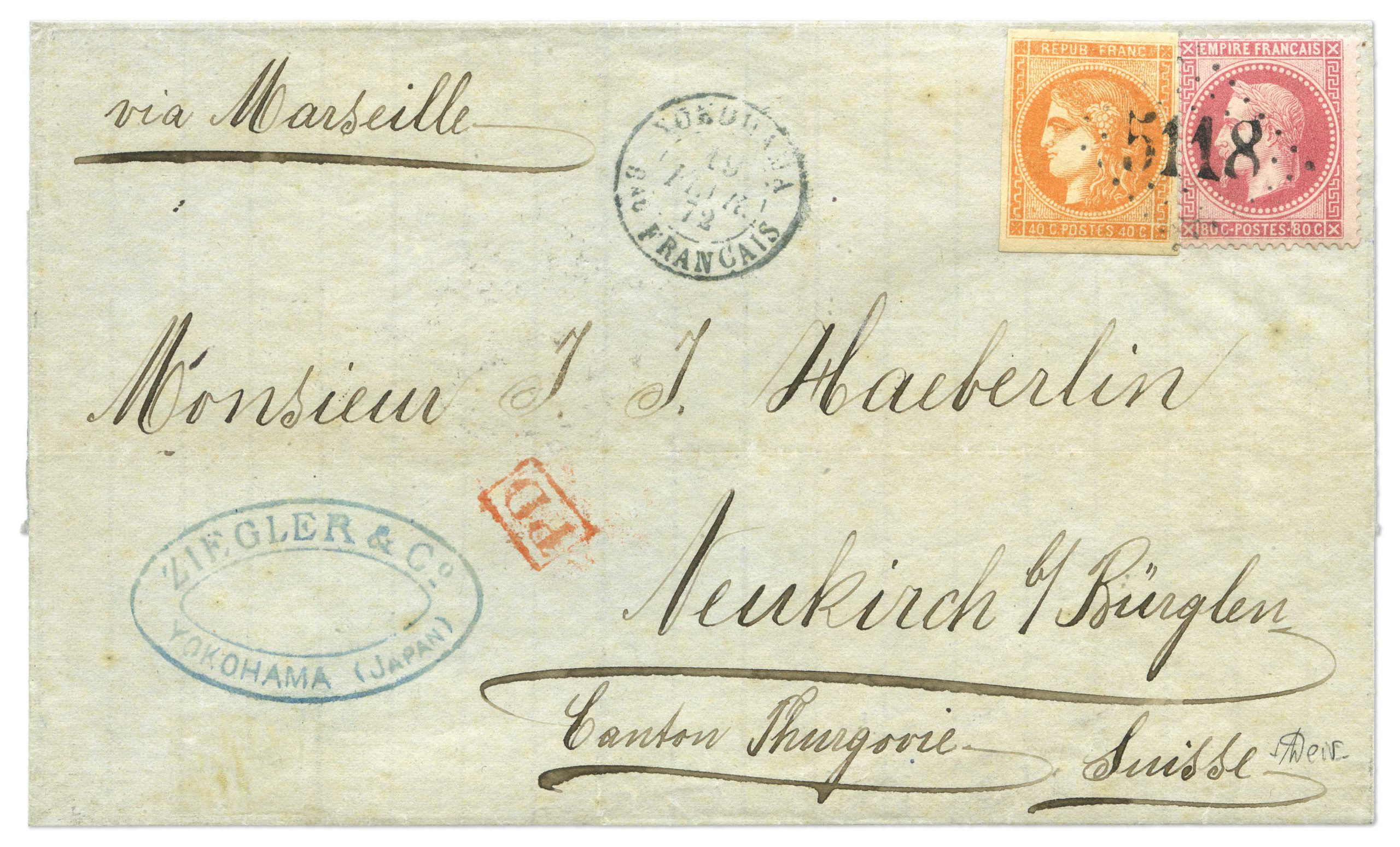 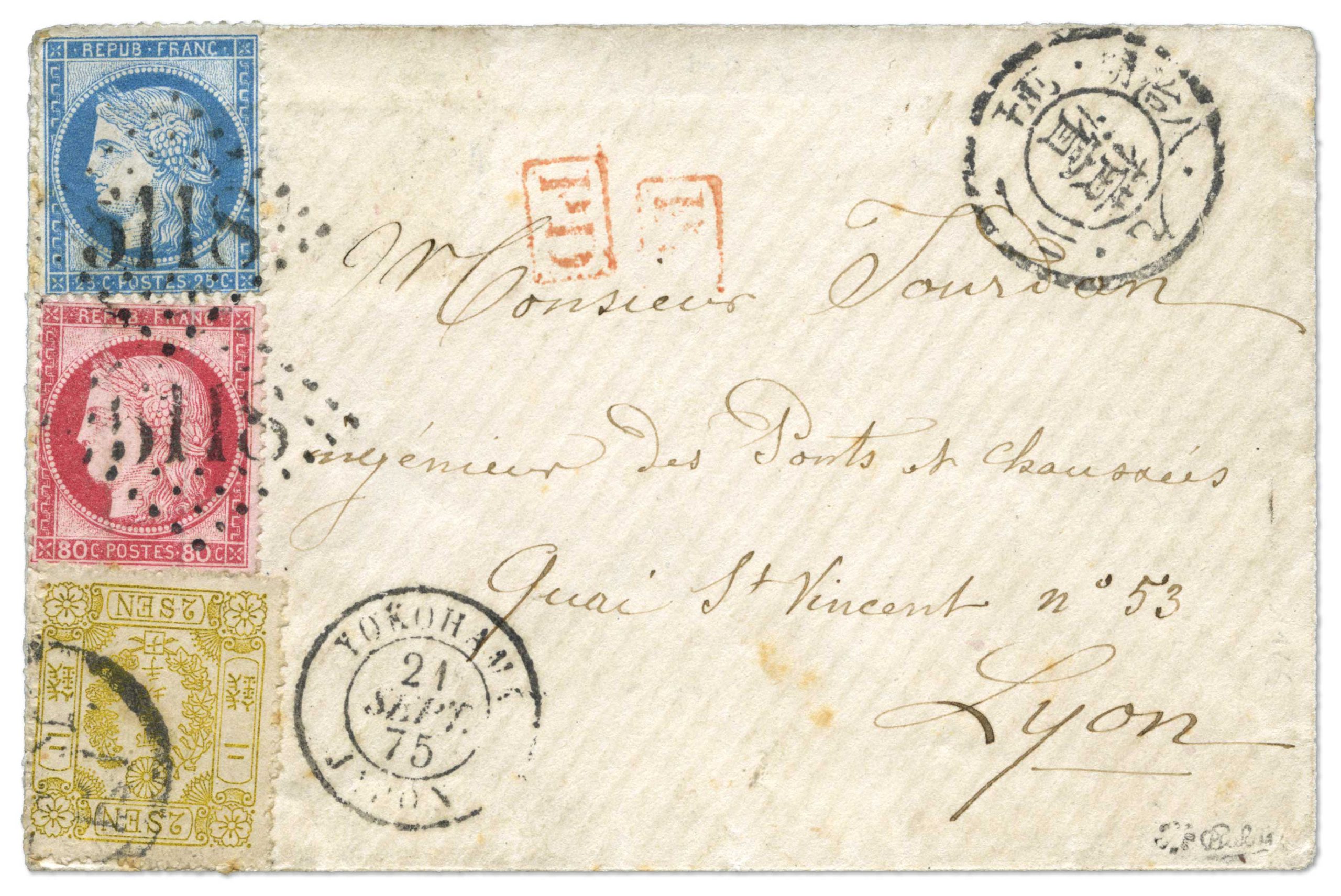 These are just a few standout items of the 300 lots on offer in this auction, covering of course Postal History, the local post stamps, Empire and Provisional issues, the Foreign Post Offices and many rare items from the German post office in China (lots 40172 to 40222) including the Boxer War – Rebellion in Petschili (lot 40209 and 40210) and 17 lots and collections. Regardless of what aspects of the auction grabs your interest, technology will be on hand to review and bid safely on all of the various sections and lots, without the risk of any purging, rioting, insurgence, or even a coup d’état. Unlike the historical incidents mentioned, auction ‘revolutions’ turn in chronological order, free of casualties, unless you count those who get beaten by a higher bidder.