In the northeastern Shandong province of the People’s Republic of China there is a coastal city called Yantai, which during the Qing dynasty (1644 to 1912) was known as Chefoo. What’s really fascinating about this fishing seaport is that back in the 1870s, when European explorers, traders and even governments were active in this region, the main exports were tofu, soybean oil, peas, noodles, vegetables, and dried fruit. Pretty much the same as might be expected to be shipped from China today.

However, what you won’t see being imported these days, but you could during that period in Chefoo, is Opium. To be fair, there were other imports much more ordinary, such as woollen and cotton goods as well as iron. Of course opium was used in China for medical purposes from as far back as the 7th century, but during the time that our featured cover was sent in 1876, imports of this drug were around 4500 long tons, which apparently is equivalent to the total global production of this opiate, for a decade, during the turn of the 21st century. Basically it was a whopping amount which in today’s terms is a head-turner. As it later transpired the Chinese became less reliant on imports because by the end of the 19th century their own production surpassed that imported.

That’s all history now due to the fact that, as we all know, things have changed beyond all recognition since those heady days. Although, you could be forgiven for thinking such dizzying highs are still coming out of Chefoo today, given that the featured cover, which is a unique envelope franked with a French 10c tête-bêche pair used in combination with the Chefoo Customs mark, and sold at a David Feldman SA auction in June 2021, for €170’800’00, including buyers premium.

In the auction catalogue, which this cover features on the front, it was described as ‘The Most Important Cover of The French Mail in China’, basically on account of this rare variety, which shows one head upright and the other upside down and is tied by a Shanghai cds, and is the earliest known use of that particular Chefoo customs mark – which appears on the reverse of the envelope. Certainly those bidding on the cover agreed and anyone following proceedings would have noticed that more than one telephone bidder wished to acquire the item and so did two other bidders, one in our Geneva offices, and more than one bidding live over the Internet. 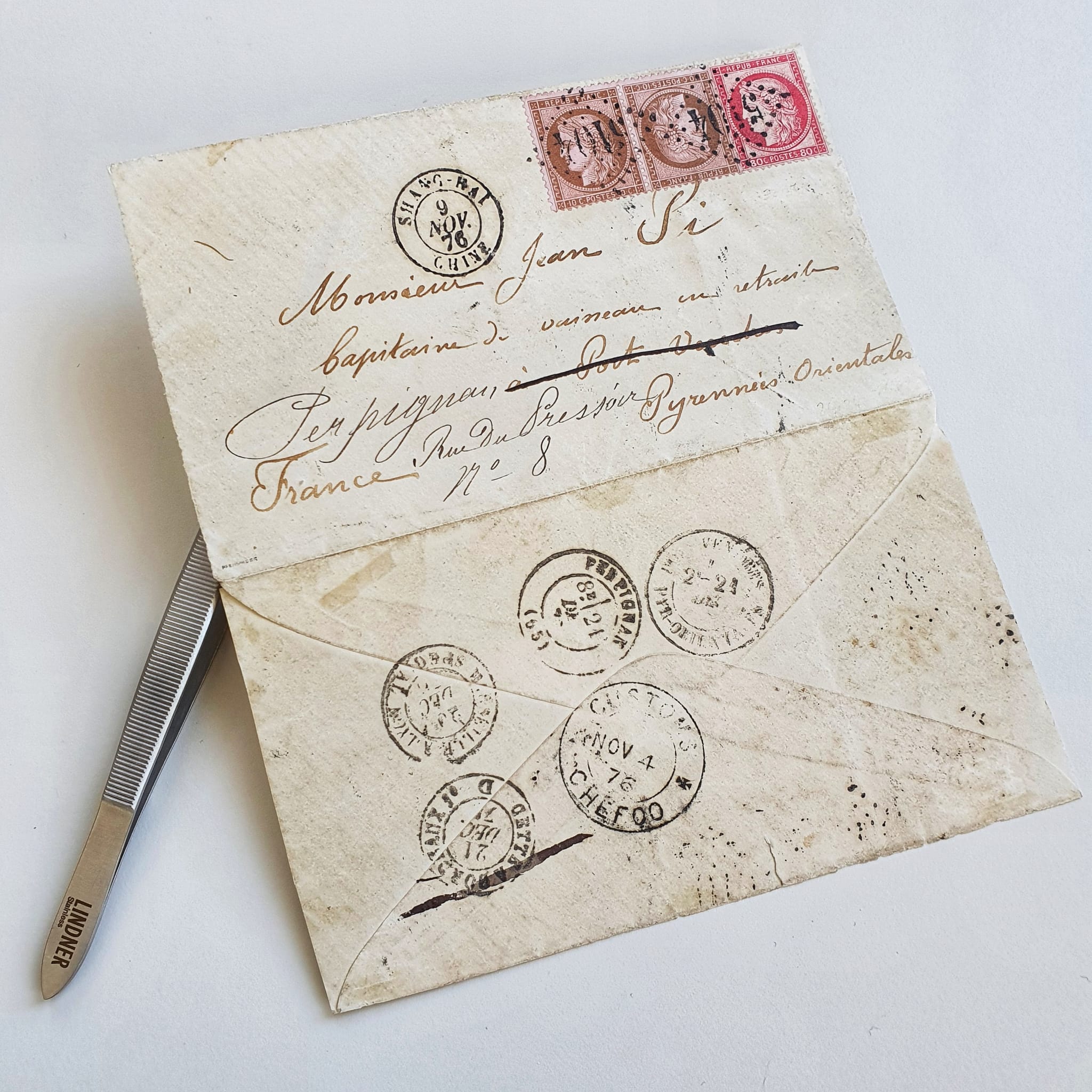 In fact, to get this envelope from it’s starting bid of €10’000’00, to the final hammer of €140’000’00, it required a bundle of bids from all these quarters, three who bid six figures. That says something about the level of interest in China, and in particular the period when foreign post offices, especially the French, were prevalent in many parts of China up until the early part of the next century. The other important aspect of this particular mail is that it came in what is known in philatelic circles as the ‘pre-stamp’ era in China postal history, meaning that it was before the first postal adhesives were produced and issued in China during 1878, which are, of course, the famous Large Dragons of China.

It’s without doubt a top rarity for the discerning collector of China, which the Yvert catalogue, just for the French franking alone, values at €25,000, but crucially it captures and preserves a unique moment in China’s history, which judging by the price achieved at its most recent auction outing it’s medicine indeed as a Chinese philatelic export. Although, strictly speaking the French should get the credit for this head-turner, which after all, without a Ceres head on its head, would never have got so high.

And during the auction this cover realised such a high price – Max J. Mayer Collections of Foreign Post Offices in China – there were fifteen frantic minutes when just three of the 301 lots available, all examples of rare French Post Office material of China, sold for a combined value of €248’880’00.  Two other covers, lot numbers 40139 and 40141, smashed their starting prices of €7’000’00 and €4’000’00, by selling for €53’680’00 and €24’400 respectively. You can read more about The Battle for China material on a dedicated blog post.