Exposé on the 2021 Spring Auction Series

There was an unmistakable steely determination around the David Feldman SA auction team at the start of last week and during the six days of almost unrelenting auction activity starting on Monday morning, which saw nearly 3900 lots sold and almost 5 million CHF in sales, there was an understated air of effective efficiency in getting a good job done. By the time the final hammer came-down on Saturday afternoon, there was an understandable satisfying sense for what was an incredibly successful set of six sales. Notwithstanding the thousands of lots now being readied for shipping and the millions of Euros and GBPS being processed, of the material sold, on average, prices exceeded estimates by 170%, helped in part by a China and Japan offering which produced a staggering 385% uplift on expectations and which saw 96% of the catalogue sold. Of course the headlines can be nothing other than the spectacular result achieved for Lot 40132 a French Post Office in China cover that lived up to its unique and important billing by selling in a thrilling and frantic auction battle, reminiscent of times gone by, for a breathtaking €170’800, from a relatively humble €10’000 starting bid.

Lot 40132: THE MOST IMPORTANT COVER OF THE FRENCH MAIL IN CHINA

However, there were other show-stoppering lots which caused the collective breath to be held by everyone witnessing the unfolding events, as well as gasps of admiration at the figures involved. On the fifth day of auctioneering, much like mountaineering, several summits were reached. To save you time and all the leg work, we can jump to the very top which was reached late on Friday afternoon, or more accurately early in the evening Geneva time, when Lot 71490, a South Africa 1861 Cape of Good Hope 1d vermilion-red Woodblock mint block of four, boasting the provenance of the father and daughter philatelic legends Dale-Lichtenstein, sold for a stamp striding £146’400. It was a superb high and not without other heights reached earlier in the day. Because we marked another incredible peak when Lot 71293, an India 1948 Gandhi Official 10r with the ‘Service’ overprint, was sold for £73’200. On the way up there we encountered the enigma of Lot 71091, a Queensland 1896 6d pair – the celebrated ‘mystery’ stamp – selling at £29’280.00, off an estimate of £15-20’000. And the French also came under siege on Tuesday during the Ballon Monte mailings, with Lot 50160, a unique 1870 Paris to Tunisia cover, that has the added attraction of Italian postage dues, selling for an above estimate price of €31’720. A result that can only be summed up in one French word; fantastique!.

And as always seems the way in these auction affairs nowadays, the collections and larger lots on offer generated great grapplings amongst bidders in the room, and on the telephone as well as online, and on Thursday many of the lots sold for four and five times their upper expectations, and probably one of the most significant examples, in more ways than one, was a collection contained in over 130 stockbooks, Lot 60859, which realised in excess of three times its estimate rising to €41’480. Similarly, in the Belgium section, Lot 60465, which was the Karpov Collection of Ministerial sheets, sold for exactly the same amount. It is worth pointing out that Latin America was not to be left out of the excitement and Lot 61603, an assembly of sixty of the primitive yet iconic 1843 Bull’s Eye issue from Brazil, achieving €15’860, and a Persia collection, Lot 63441, which contained an 1870-1879 selection in 47 albums, was competitively bid up from a lower price of €12’000 making a splendid €34’160.

In the philatelically mythical section of Mauritius, there were two stand-out results as well,  Lot 71352, a Mauritius 1848 Post Paid 2d blue, selling for £15’860, and a rare 1859 Sherwin 2d vertical pair on cover, Lot 71384, that sold for £17’080.  And it is worth highlighting that amongst some superb quality European, of which the Austrian lots repeatedly tripled their estimates, a magnificent Transylvania 1857 cover with a stunning, and probably unique franking, Lot 60124, starred in this mouthwatering assortment of stamps, pieces and covers, sold for €19’520, from an estimate of €5’000 to €7’500. 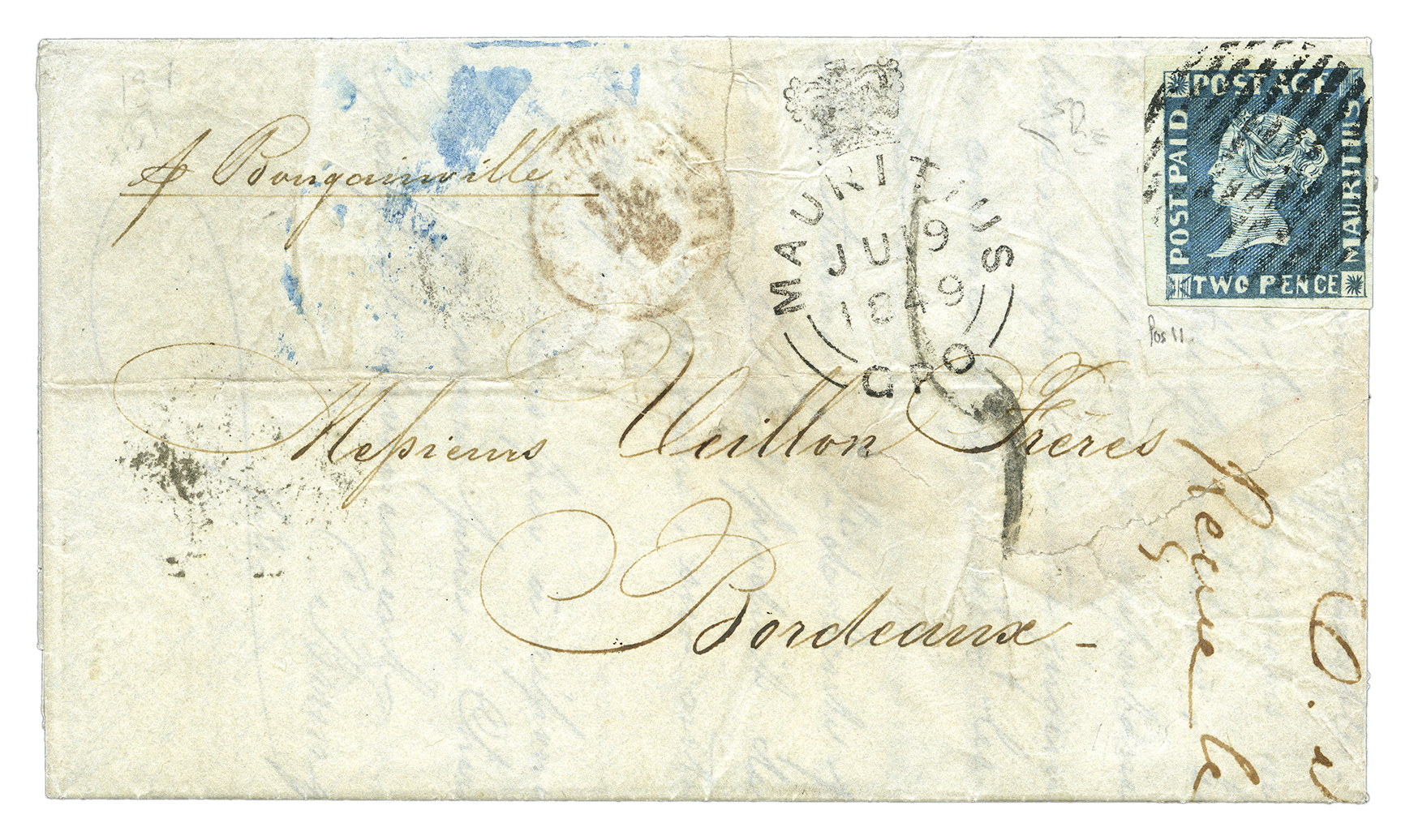 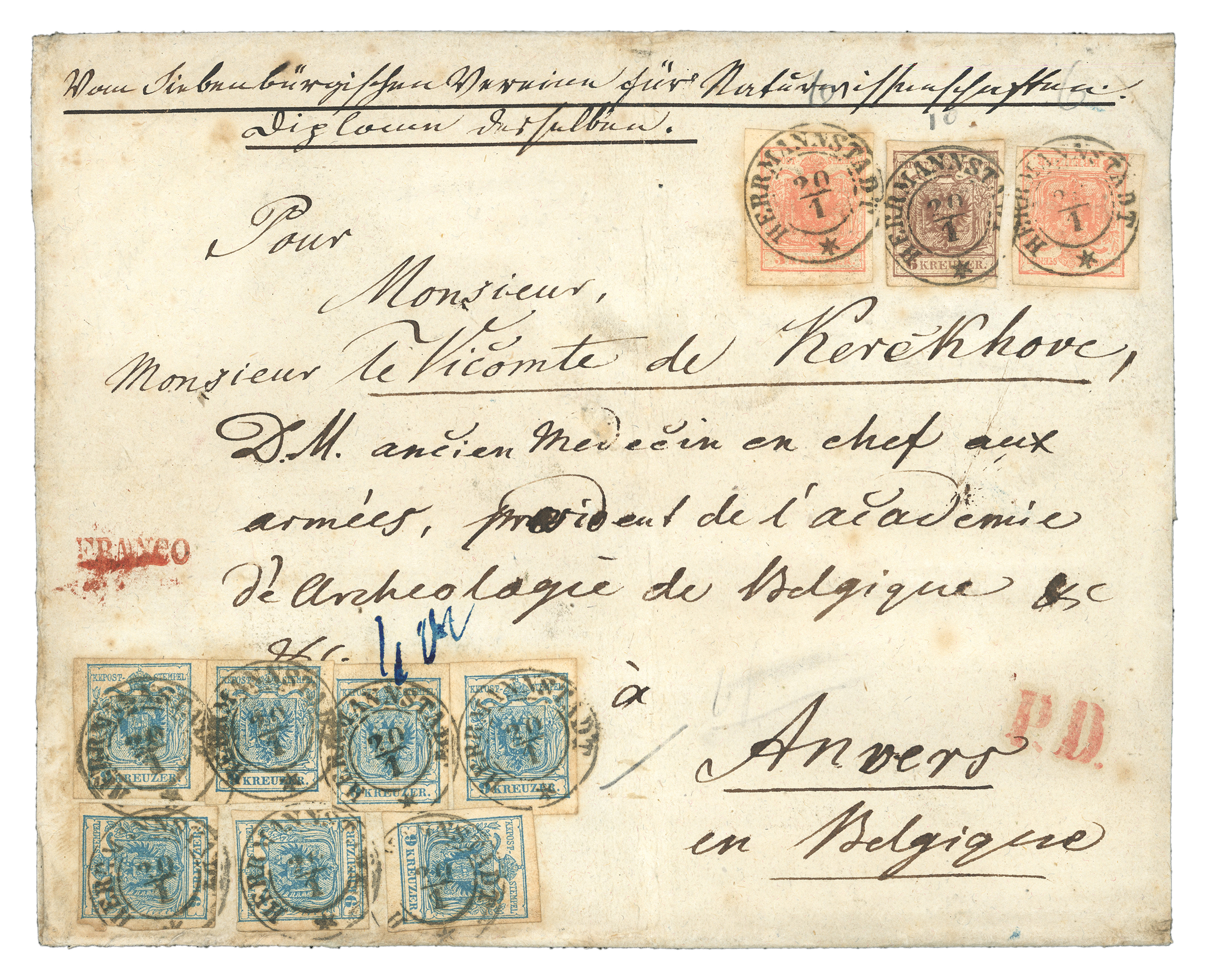 There were many other individual star auction performers, too many to mention here, which you can discover at your leisure online as well as pick-up any which evaded detection during the heat of proceedings last week, although it would be remiss not to conclude this auction exposé with a check on the charmingly charitable aspects that raised money for Doctor’s Without Borders (Médecins Sans Frontières), which were the three lots – 40100, 70502 and 70583 – generously donated with all proceeds going to the Doctors Without Borders cause. The former of the three; a 1968 China People’s Republic Mao Tse-tung Directives block of twenty, realised a heart warming €17’080, and a superb unmounted mint block of four GB £1 green Seahorses selling for a back tingling £13’420.00, before a block of the Battle of Hastings QEII imperf variety rattled in another £1700 for the globe trotting Doctors.

A big thank you to the kind gifters and benevolent bidders for making this, undeniably, the icing on the proverbial cake on what was, an auction oven that overheated with bids at times, but was baked to perfection throughout.

For more detailed information from the record breaking auction on day three – China & Japan, which really was a spectacle – you can read our detailed report upon our blog.