The Spanish-American War took place between April 21st and August 13th, 1898. The main issue was Cuban independence where revolts had been occurring for some years against the Spanish colonial rule. By the late 1890s, American public opinion swayed in support of the rebellion due to reports of concentration camps set up to control the populace, and when the United States Navy armored cruiser “Maine” mysteriously exploded and sank in Havana Harbor on February 15, 1898, political pressures pushed President McKinley into a war that he had wished to avoid. So on April 20th, 1898, McKinley signed a joint Congressional resolution demanding Spanish withdrawal and authorising the President to use military force to help Cuba gain independence. In response, Spain severed diplomatic relations with the United States on April 21, and on the same day, both sides declared war. One of the United States’ principal objectives in the Spanish–American War was to take control of Spanish possessions in the Atlantic (Puerto Rico and Cuba) and their possessions in the Pacific (the Philippines and Guam).

The American forces landed in Puerto Rico on July 25th, 1898, through the southern town of Guánica. Shortly after, many towns in the south of the island were occupied and three days later had occupied the town of Ponce. The town of Coamo was occupied on August 9th, but a military postal station was not established there until September 9th. When the Spanish retreated they took with them the stamps and postal devices, when they were not destroyed afterwards by the population. Before new issues under the American administration became available, a few towns used provisional stamps or markings under the control of the the Mayors.

In Coamo, Mayor Florencio Santiago petitioned General James H. Wilson to create a provisional stamp. Permission was granted and the stamp was printed in a hand press at a local print shop. It is thought that fifty sheets of ten stamps, 500 in total, were typeset printed in black ink on imperforate, unwatermarked yellowish paper with an uneven brownish gum applied. There were two horizontal rows of five stamps per sheet. Interestingly, since the printers did not have enough number “5” characters, four different fonts were used. Each stamp has differences in the typeset so its position in the sheet can be identified. A control mark “F. Santiago” was handstamped in violet to prevent counterfeits.

Lot 20138 from our September 13th auction: Complete sheet of 10 of the Coamo 5c Provisional

Mr. Alfred Otto Tittman, a stamp collector himself, knew of the stamp‘s existence by way of Army Private Eldredge who had obtained a copy of the stamp from a war correspondent in Coamo. On October 26th, 1898, Mr. Tittman purchased the reminder of the sheets, from the Mayor‘s secretary. For the remaining 310 copies, he paid US$33.00. Mr. Tittman then brought the sheets to the United States where he showed them to Charles H. Mekeel, a prominent stamp dealer, who cut and sold most of the sheets into singles with very few seemingly kept intact. Lot 20138 in our upcoming auction is a complete sheet signed on the reverse “Guaranteed – C H Meekeel”. While various writers have estimated that between six and ten sheets survive, Dr. Ronald H. Gonzalez has identified 21 different full sheets in his census, though he notes that some are from old photos and may not be genuine or may have been cut apart.

The stamp became known to the philatelic trade because Cpt. R. D. Potts, an Army officer, had purchased and used some of the stamps to mail his letters to his wife in San Francisco, CA. A total of 10 covers with the Coamo stamp are recorded in Siegel’s census, of which three are those mailed by Cpt. Potts and only three have the stamp tied by a cancellation (probably due to the lack of canceling devices in Coamo). As a result of the lack of covers and cancellations, the dates of usage are uncertain, but the earliest recorded cover is dated August 19th and the latest recorded cover, lot 20140 in our upcoming auction, is dated September 19th. This cover featured on the front cover of the Acevdeo collection of Puerto Rico Postal History sold by Spink Shreves in 2009. The 5c in fact only paid for carriage from Coamo to Ponce and another 2c should have been paid or collected, so either the Ponce postal clerk was careless or kind to a fellow soldier. 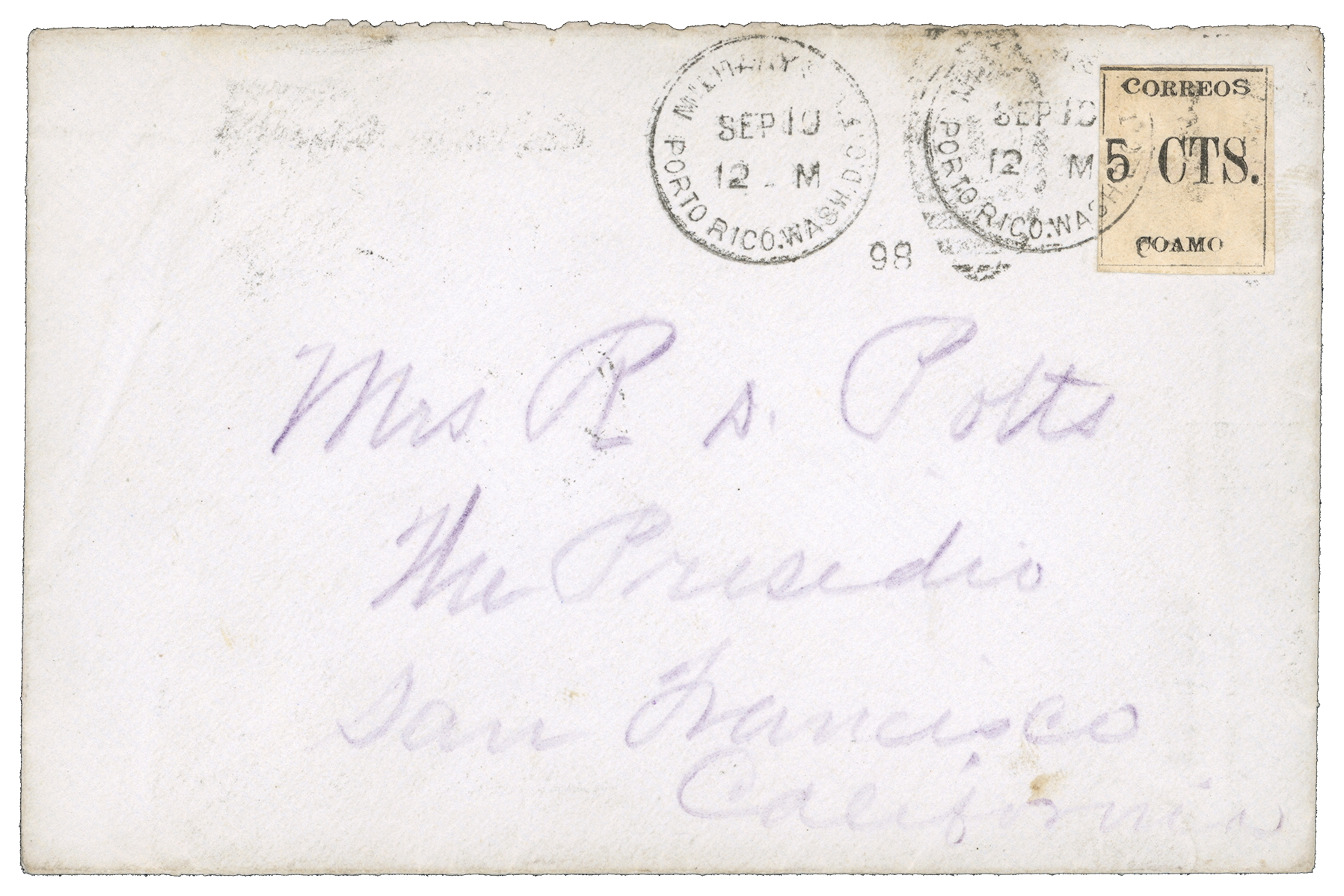 Lot 20140 from our September 13th auction: One of only 10 covers recorded bearing the Coamo 5c Provisional, ex Gallagher and Acevedo.