The Spanish-American War Part One is coming soon

If you’ve tuned into the world news this month you’ll have noticed that the Caribbean and the Asia-Pacific have featured a fair amount of weather related topics – notwithstanding the obvious smattering of pandemic and Covid soundbites. But if hurricanes, torrential rain or extraordinary temperatures aren’t your thing, then our News of the Month offers a dryer if not hot, but certainly less turbulent alternative. The News is of course the exciting specialised auction taking place on the 13th October 2021, of The Jack Thompson Collection of the Spanish-American War, Part I, which features the rarely seen Micronesian island of Guam, the Philippines and the Caribbean island of Puerto Rico.

The great thing about this particular conflict, which took place between April 21st and August 13th 1898, is that we have a clear winner – the Americans. The hostilities apparently started following an explosion on the USS Maine which was stationed in Havana Harbor in Cuba. This conflict ultimately led America to intervene in the Cuban War of Independence and resulted in their acquisition of Spain’s Pacific possessions. As a result a beneficiary is the collector of stamps and postal history. You see, because the war was played out in a short window of opportunity – just over 3 months – material is scarce and often very rare. And the fact the war took place in the Caribbean and Asia-Pacific region and involves the postal heavy weights of the United States, in and around some remote locations, it is highly interesting and offers much for the discerning stamp collector and postal historian. Should you not be aware, Guam, which is now the westernmost point and territory of the United States in Oceania, gives the world of philately some attractive overprinted “GUAM” US stamps from this period, and includes the visually pleasing US Special Postal Delivery stamps – featured above. There are also postal history items from this tiny island including registered, commercial mail and military correspondence.

The Philippines equally has an offering of similar covers but also one wreck mail, a strong selection of soldier letters, filipino revolutionary mail, postal stationery and combination covers into and from this region. The overprinted stamps incorporate the US issues from the period, as well as the postage dues, newspaper stamps and Provisionals. 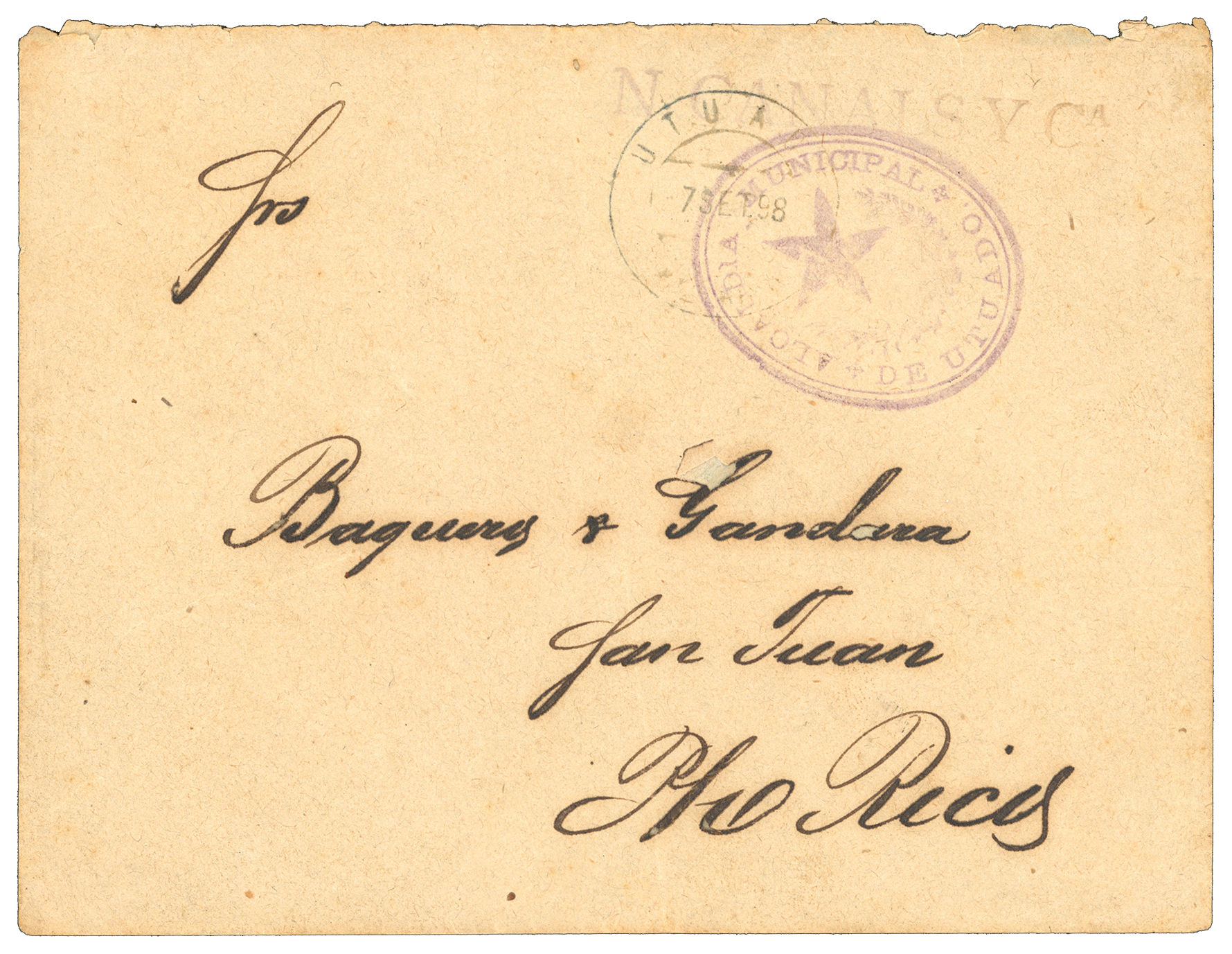 The Puerto Rico section offers material brimming with scarcities, and crucially features the ‘Ponce Provisional 1898 5c violet’, of which there are fewer than 25 examples recorded, and a complete sheet of ten of the ‘Coamo Provisional 1898 5c black’, with about ten surviving examples, as well as a rare opportunity to obtain a single of this elusive Provisional used on a cover (Lot 20140) to California, which is one of just three known used in conjunction with a postmark. Also, particular attention should be directed to the provisional postmarks used on cover in the territories taken by the Americans, where the Mayors temporarily had the control of the mail (Lots 20141 to 20144). This is illustrated by the cover which is franked with a Provisional of Utuado, and was successful in crossing  enemy lines (Lot 20144).

The Special Printing of the “Puerto Rico” overprints (U instead of O) on 1c, 2c, 5c, 8c and 10c, as well as Postage Due 1c, 2c and 10c are available (Lot 20145) and the varied range of covers includes mail into Europe. In total we have 169 lots of which there are a robust 37 from Guam, an abundant 77 out of the Philippines region and a sparkling 55 claiming Puerto Rico connections. The auction catalogue will shortly be available with all lots online, where bids can be registered. More details to follow, but don’t miss this opportunity to acquire material from this historic conflict.