On October 14th, 2021 we had the great honour to auction the “Imperium” Collection of British Guiana, which included all the treasures from the Grand Prix winning John E. du Pont Collection we sold in 2014.

This unique offering seized the imagination of an exclusive audience in our auction room, and the numerous telephone buyers who took part, as well as the multitude of online bidders, for what was a captivating 248 minutes of auction of intense bidding.

The results were outstanding!

The highlights from the script of this latest British Guiana plot reads as follows; more than £2.8 million in sales, 223 lots sold, representing 94% of the catalogue successfully selling, and 130% above the estimates. 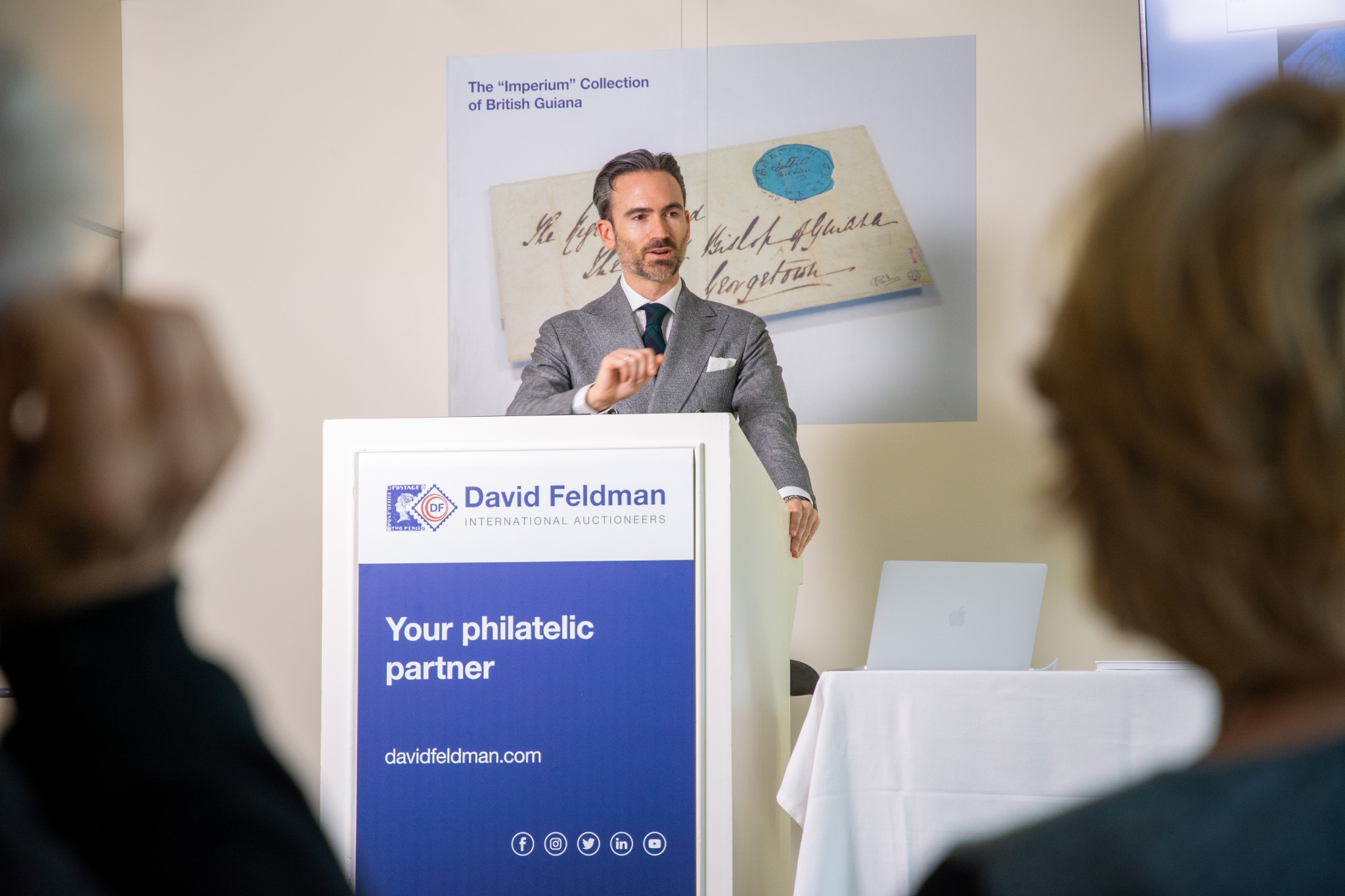 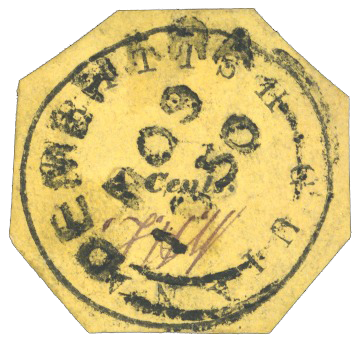 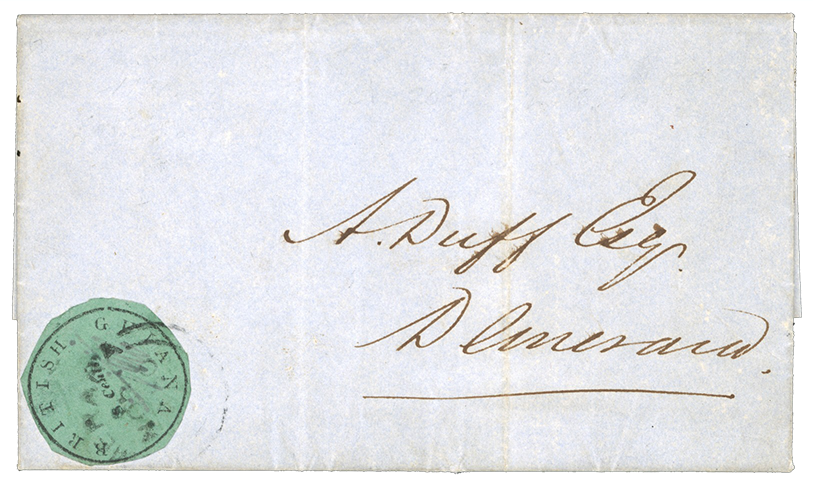 Lot 30025: THE EARLIEST OF ONLY FOUR 8 CENTS COVERS RECORDED

But what of the British Guiana superstars you wonder, and you are right to be eager to learn of their fate, given their fame and importance. Well, the famous ‘Miss Rose Cover’, Lot 30018, one of the most important Cotton-reel items, which features a pair of the 2 cents black on pale rose, sold for £292’800*. And the unique “Burrus – Two Cents” Error on Cover, Lot 30049, made £414’800*, and another Burrus legendary cover, the only cut square 4 cents Cotton-reel on Pelure paper, went for £152’500* – Lot 30052.  Whilst on this narrative, the ex Ferrary 12 cent Cotton-reel multiple, known also as ‘The Finest’ and ‘Only Sound’ example, Lot 30029, out-performed it’s upper estimate, with the hammer eventually coming down at £65’000 having been competitively bid up between phone and internet and from within the room. It was breath-taking. We should note here that these items all came sprinkled in stamp stardust, so to speak, them being dressed in that extra special philatelic pedigree, and a shining example of this alluring feature was Lot 30027, one of only four covers with the rare 1850-51, 8 cents black on blue-green, but boasting the Provenance of; George Walcott (1935), Robert S. Emerson (1938), Henry C. Gibson (1944), Sir John Wilson (1963), and the infamous John E. du Pont (2014), going for triple its estimate making; £42’000. Not to be outdone on the extraction front a piece, franked with a 1850 12c Cotton-reel, the earliest recorded use of a British Guiana stamp, Lot 30038, which reached £19’000*, came with the philatelic ancestry of, Philipp von Ferrary (1921), the specialist British West Indies philatelist William Augustus Townsend (1969), as well as the completist Maurice Burrus (1963), and our American Foxcatcher, John E. du Pont (2014). And a stamp which must get a mention, not least because it has been in the collection of King Farouk I, as well as Avery, Champion, and René Berlingin, sold for £109’800*, Lot number 30017, the rarest stamp of the “Cotton-reel” primitives, being one of the only two single examples remaining in private hands. Which explains why such prestigious collectors wanted to own that particular 2 cents. 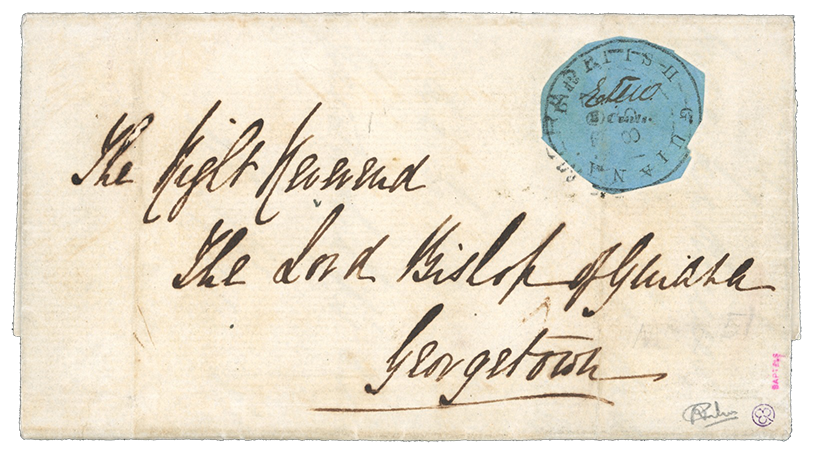 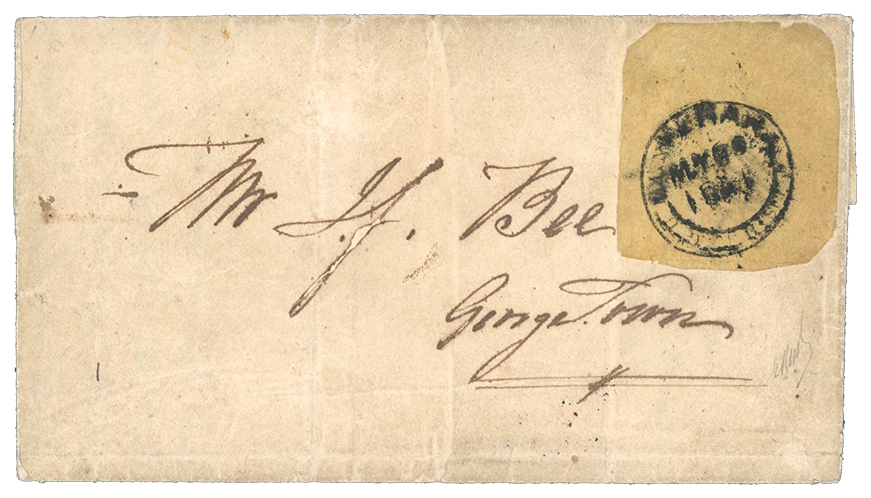 Lot 30052: THE MOST SPECTACULAR “COTTON REEL” ON COVER
THE UNIQUE CUT-SQUARE 4 CENTS ON PELURE PAPER ON COVER

Of course say; “British Guiana” to anyone, including a non-stampy person, and they think of that octagonal Magenta One-Cent stamp which is the most expensive adhesive on the planet, and whilst that was originally part of the John E. du Pont’s Grand Prix winning collection, it wasn’t part of this offering having already been sold earlier this year for £8’3m, but we did have its parents if you like, which were two look-alikes of the world’s most famous stamp, the 4 cents Magenta on covers, cut to the same shape, Lots 30120 and 300121, reached £20’000 and £17’000 respectively, the latter started at a mere £7’000. And for those who want to know what these stamps look like when they haven’t had their corners clipped, then Lots 30119 and 30122, are the uncut version of the reel, selling for admirable prices of, £28’000 and £26’000, the former ex Ferrary and the finest of this issue, the latter the rare rose-carmine iteration. Mind you, these look-alikes in some respects pale at the 4c blue Provisional incarnation of these, because one of the two rarest and most valuable of all unused stamps of British Guiana, Lot 30125, sold for £109’800* and a used example of this world rarity, the very next Lot 30126, sold for a lofty £61’000*, matching its past owners for grandeur having been in the collections of Arthur Hind and Dale-Lichtenstein. It was an historical auction in more ways than one.

Lot 30017: THE TWO CENTS: ONE OF TWO EXISTING SINGLE EXAMPLES IN PRIVATE HANDS 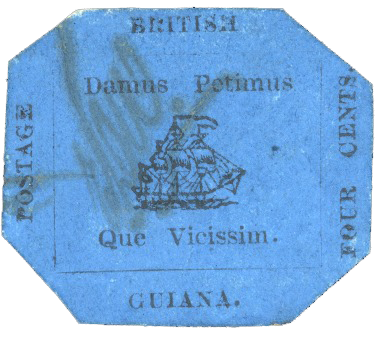 Lot 30125: ONE OF THE MOST VALUABLE UNUSED STAMPS OF BRITISH GUIANA

However, it isn’t always about the megastars, or the look-alikes, because this prized British Colony is one of the all time classic philatelic collecting regions, and as you know, those foremost countries, which have big reputations, need to have the substance to back-up their billing in order to maintain the attention of the discerning stamp connoisseur and Lot 30172, which perhaps appeared to be a modest selection of 1860-76 Ship issue covers went from £6’000 to £13’000, and a rather unsung hero of this area, a complete sheet of x24 1862 1 cent rose Provisionals, Lot 30173, hit a head-turning £10’000, before a cover bearing a strip of the 2c 1862 Provisionals, ex Lars Amundsen, and the most important cover of this issue, Lot 30174, hammered at  £13’000.

There were many other outstanding results, often way above the anticipated prices and always stimulated by a throng of online bidders who won the majority of lots. This seemingly insignificant detail is quite profound given the stark contrast from when this material took to the podium in 2014 – when the bidding was all from the room. Times have certainly changed the dynamic of our hobby in the intervening years, even though interest in this iconic British Colony, set in that philatelically magical northern coast of South America, has not waned.

You can learn more about the prices realised here, and make an offer for the few lots which were unsold.

* The prices include the 22% Buyers’ Premium.