The Gospel Truth about a Stamp

The British Guiana Cotton Reels are among the World’s rarest stamps and these Primitives are scarcely, if ever, described as ‘attractive’ but we take a closer look at one example which most definitely can be called a ‘beauty’.

There was once a notable 17th century English clergyman who was considered to be the preeminent minister and theologian in certain parts of the US during his lifetime, who rather fittingly, went by the name of, John Cotton (1585 to 1652). Now he famously said; “Beauty has no relation to price, rarity or age.”  It is a saying which has transcended the ages, and is as adpt, and probably quoted more now, as when it was articulated. Dare we suggest it is true in many aspects of our beloved hobby and certainly when assessing those crudely formed cotton reels of British Guiana, who’s price are everything to do with their rarity and age and nothing whatsoever to do with their beauty, it must be the gospel truth.

However, it might not be true in one particular case of this strain of stamps, because, although the most ardent admirers of this issue confess they are not blessed with looks, more than one postage protagonist has fallen under the spell of its beauty. The example in question is the 1850 12 cents black on blue, a magnificent horizontal pair, Lot 30029 in our upcoming auction of The Imperium Collection, and which possesses qualities that both add to its appearance and its price.

The thing about this particular stamp – which was once in the famous collections of Philipp von Ferrary (Lot 38, Sale I, June 1921), Tomasini (Lot 6, October 1973), and John E. du Pont (Lot 60017, June 2014) – is it’s the only sound copy of a multiple 12c, of which there are just four examples.  As such, it goes by the title of; The Finest Twelve Cents Cotton Reel Multiple, and despite this grand description it will be offered at a respectable and somewhat realistic estimate of £30-50’000. 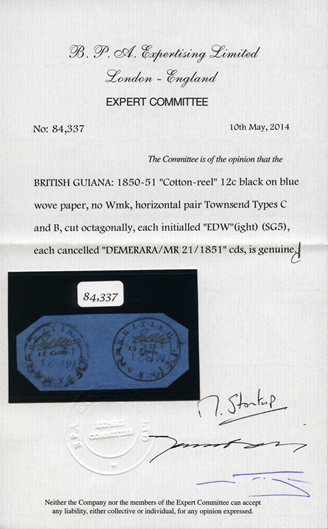 Now, the reason our cotton reel charmer contradicts the saying of the man-of-god and namesake John Cotton, is not due to its sound condition alone, that is a factor. In short, it has as much to do with its aesthetically pleasing attributes, as age and rarity, which produces in stamp collectors a rather profound appreciation in regard to the price. For example, at its last auction outing this resulted in a beautifully buoyant price being bid, substantially higher precisely because of its beauty. In philatelic speak its unusually full margins, lack of blemishes to speak of, and its stunning se-tenant pairing that superbly illustrates the thin and thick frames, equated to a sale in 2014 at a record breaking 130’000 Euros, and that was off an upper estimate of 15’000 Euros. The visual appearance combined with the rarity, adorned in exceptional condition, created multiple suitors raising their hands from several quarters. This suggests beauty had everything to do with its rarity, age and price.

Whether the theologian John Cotton speaks truth the next time our 12c Cotton Reel appears on the auction altar, depends largely upon the wisdom of another famous idiom; “Beauty is in the eye of the beholder.”

Opinions on such subjective matters definitely do make a difference. But in the absence of beauty, then we must not fear, rarity and condition will speak a gospel truth. Of course, stamps weren’t around in the 17th century, so JC couldn’t have known that stamp prices have a direct correlation with their rarity and age. Beauty in philately is a rare commodity. And that really is the gospel truth about stamps.