If our last legendary collector had a philatelic personnel file as thick and hefty as an old oak tree, then our next legend is the polar opposite, not that his accomplishments were less weighty, because in fact they were substantially greater, but information surrounding the life of, Alphonse Mayer von Rothschild (1878 to 1942), is so scant that, excuse the pun, it is as wafer thin and lightweight as a postage stamp. However, the philanthropist Alphonse, a member of the famous banking family, was a legendary Austrian Philatelist, who also amassed a phenomenal art collection, as well as a renowned library of classic literature, and assembled one of the most significant and comprehensive stamp collections ever formed – which, several decades after his passing, took a number of years to sell in substantial auction sales, totalling almost £7m in sales.

What is recorded about Rothschild the man is intriguing given his desire to remain private and avoid the bright lights of commerce and public notoriety. Of course he was extraordinarily wealthy, thanks to the legacy left to him by his father, whose grandfather was the founder of the esteemed Rothschild banking empire, and this unimaginable mountain of cash provided the funds to buy some of the world’s great rarities, and enabled him more than a degree of flexibility on how to live his life. However, our shy stamp protagonist didn’t shirk his national duty and it can certainly not be claimed his riches made him namby-pamby, the reality being when required he was vividly valiant. Firstly, he had a distinguished military career, serving in the Austro-Hungarian army for the duration of World War I, 1914 to 1918. He was called-up to the Imperial and Royal 6th Dragoon regiment as a Lieutenant on the eastern front against the Russians, before a spell with the 7th Cavalry Division, and later being promoted to the rank of Cavalry Captain and serving on the Italian front-line. It’s a curious period in our legendary collectors time on this planet, because he clearly put his head above the parapet and indeed when discharged from the military in 1918 he was awarded the, ‘The Ottoman War Medal’ known in Austria as the ‘Iron Crescent’ (Kaiserlich-Ottomanische Kriegsmedaille), and the fact he survived four long years in the trenches, and with flying colours, or perhaps more appropriately sparkling stirrups, tells us he had a lot more about him than a family name and a healthy bank balance.  It’s also an enigma that our philatelic Rothschild was known to his close friends and family as “Buster”, which is perhaps not only a contradiction to his delicate public persona, but also a poke in the eye to the stereotype image of a stamp collector, because the nickname denoted that Alphonse was a ‘tough guy’.

Admittedly, insights such as these are rather limited when flicking through the available pages of his life file, which can not be said of the pages of the auction catalogues for his Italy, Italian States, Finland, Russia, German and of course Austria collections, to name but a few.  It seems despite the world-class collection, his mark on the philatelic world was a reflection of his personal life in that he kept his activities on a need to know basis and very low profile, so although he was decorated for his courage on the frontline in the first world war, there are no medals or decorations to illustrate such a distinguished service in the mud, bullets and glory of stamps.

Having said that, what he assembled is tough for any guy or girl to eclipse and could almost be described as heroic in scale and nature. Which perhaps is a better illustration of his adhesive achievements and poetically the albums containing his gigantic collection were taller and almost as hefty as our aforementioned old oak tree, the contents which resulted in there being more written about the Alphonse Collection stamps than about the man himself, which is a tad ironic given his name means “ready for battle”! What is apparent is that Alphonse Mayer von Rothschild, is a ‘Heroic’ philatelist. 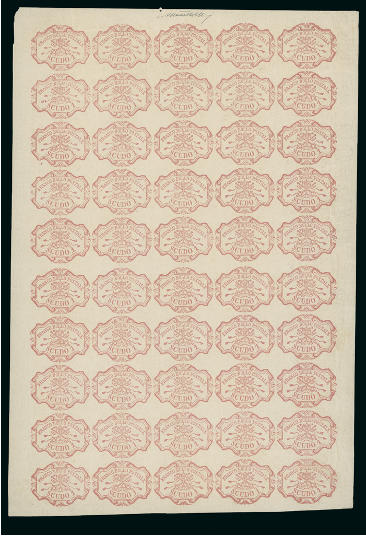 Papal States 1852 1 scudo carmine-rose, the extraordinary complete sheet of fifty, once in the collection of Rothschild and sold in the David Feldman SA, December 2021 for 146’400 Euros. Lot 40206.