Have you noticed that the Scottish are an extraordinarily gifted bunch? Despite being a relatively small nation they always seem to produce a disproportionate number of inventors. I mean let’s state the obvious, you’ve got the Scots to thank for telephones, television, penicillin, vacuum flasks, waterproof fabric and controversially the adhesive postage stamp, although let’s not get into that right now, we can save it for another time and avoid any fights, which again isn’t recommended given the reputation the Scots have for being a formidable opponent. But, even if you ignore the inventions, Scottish folk get around, and they pop up all over the world as famous actors, writers, poets, scientists, doctors, and explorers.

Our next legendary collector is no exception to the trend of extraordinary Scots both professionally and philatelically speaking. You probably best know Dr James Hunter Harvey Pirie  (1878 to 1965) as J.H. Harvey Pirie, because that was the name he wrote articles and authored his book “Antarctic Posts” which was published in 1949. That was just a year after he’d signed the Roll of Distinguished Philatelists.

Pirie who was also a Fellow of the Royal Philatelic Society London, was a Scottish doctor, and bacteriologist by profession. In fact, he’s another of these 20th century gallant Scots who made a name for himself worldwide, because Pirie was the guy who named the bacterial genus Listeria, honouring the work Joseph Lister had done before him. And Pirie is no stranger to having things named after him too. 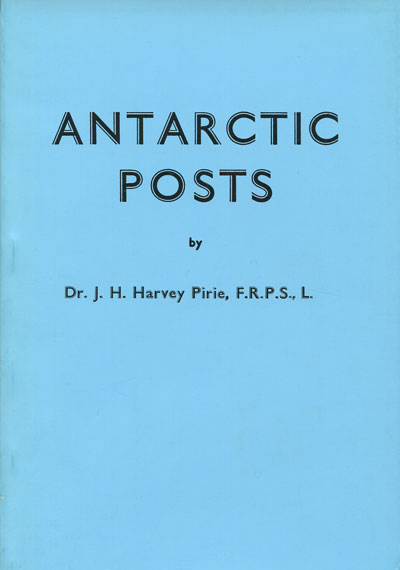 ‘Pirie Peninsula’ which is just off the bitterly cold shores of the Antarctic Island of Laurie in the South Orkney Islands, was named after Pirie. And you don’t get such honour unless you’ve been out there and turned over some ice blocks and discovered a thing or two. And our man did. Pirie participated in the Scottish National Antarctic Expedition on the ex-whaling ship Scotia in 1903-1904, under the captaincy of William Speirs Bruce. Our legend Pirie acted as both surgeon and geologist on this bracing expedition.

As the artic name suggests this part of Antarctica is icily inhospitable during winter, and so much so that during the first expedition these guys, who sailed there in a three masked ship, known as a barque, were frozen solid in the sea for the entire winter. And this was back in the days before central heating. Although, hold on, that’s not actually correct because prior to this a Scottish inventor, James Watt, had managed to produce the first working central heating system, but sadly for our explorers he’d not widely shared the concept and anyhow it was a while before ships benefitted from similar luxuries. The point being, the Scotia would have been a rigid frozen lump of wood offering little in the way of creature comforts. So Pirie and his fellow Scottish explorers spent the majority of 1903 operating from a frozen makeshift base on Laurie Island, which you and I would probably feel was best suited to be employed as somewhere to house your lawnmower and garden utensils out of the rain. Not somewhere to work and sleep in -20.

But, lets not feel too sorry for our intrepid bunch, because they are Scottish and as we have all come to know they can endure such tough frosty conditions, and anyway that’s enough of the chilling details, because Pirie was a top philatelists who later in his life immigrated to South Africa, no doubt he’d had enough of the weather conditions back home and down there in the south pole, and sought warmer climes, and in South Africa he certainly blossomed. Pirie became an authority on South African Posts, and for 36 years was the writer and editor of the South African Philatelists. Pirie became an expert on the stamps of Swaziland and the New Republic as well. He led the line in South African philately and became the President of the Johannesburg Philatelic Society. From there Pirie was instrumental in the International Exhibition of 1936 called JIPEX held in his then home town.

As you’d expect from a man that devoted such a block of his time to the south pole region, he formed an exceptional collection on Antarctic Posts. His name is today synonymous with the topic, not just because of his book, but items which have graced his collection are coveted. But Pirie is remembered for being the ‘backbone of philately’ in South African, and was recognised for being such by signing the Roll of Distinguished South African Philatelists in 1948 as well. The first Scotsman to make the cut for the spring box. Proving that the Scottish have this innate ability to not only spread their wings in the northern and southern hemisphere successfully, but to also explore and learn what they discover wherever they go. Pirie likewise shared his discoveries and certainly did Scotland proud in his profession, and he did the world of philately proud as well. J.H.Harvey Pirie might not have been one of the Scottish inventors, but he certainly popped up around the world and made a name for himself. Our Philatelic Explorer J.H. Harvey Pirie.