The Bangkok “B” Overprints

Western European nations began trading with Siam as early as 1511 with the arrival of the Portuguese, before the Dutch and British in 1608 and the French in 1662. It was not until 18th April 1855 that more formal trading agreements were established when Great Britain and Siam signed the Bowring Treaty of friendship and commerce. Dozens of nations followed and concluded their own treaties and international shipping gradually increased, especially with Singapore.

The British Consulate in Bangkok commenced handling foreign mail shortly after the Bowring Treaty. There was no organised mail service in Siam at the time. In 1861 King Mongkut had sent officials to Singapore to study how it was administered, including their Post Office, and an offer even came from De La Rue to supply postage stamps but this was rejected. So outbound mail from the consulate was carried to Singapore and later to Hong Kong as well. By the 1880s the Consular Post Office had a stock of Straits Settlements and Hong Kong stamps in order that senders could pre-pay the postage so that the ship captains could mail the letters when ashore. Covers are known with the stamps cancelled by a British Consulate Bangkok seal, either as a cancellation or as a security marking (see fig. 1). 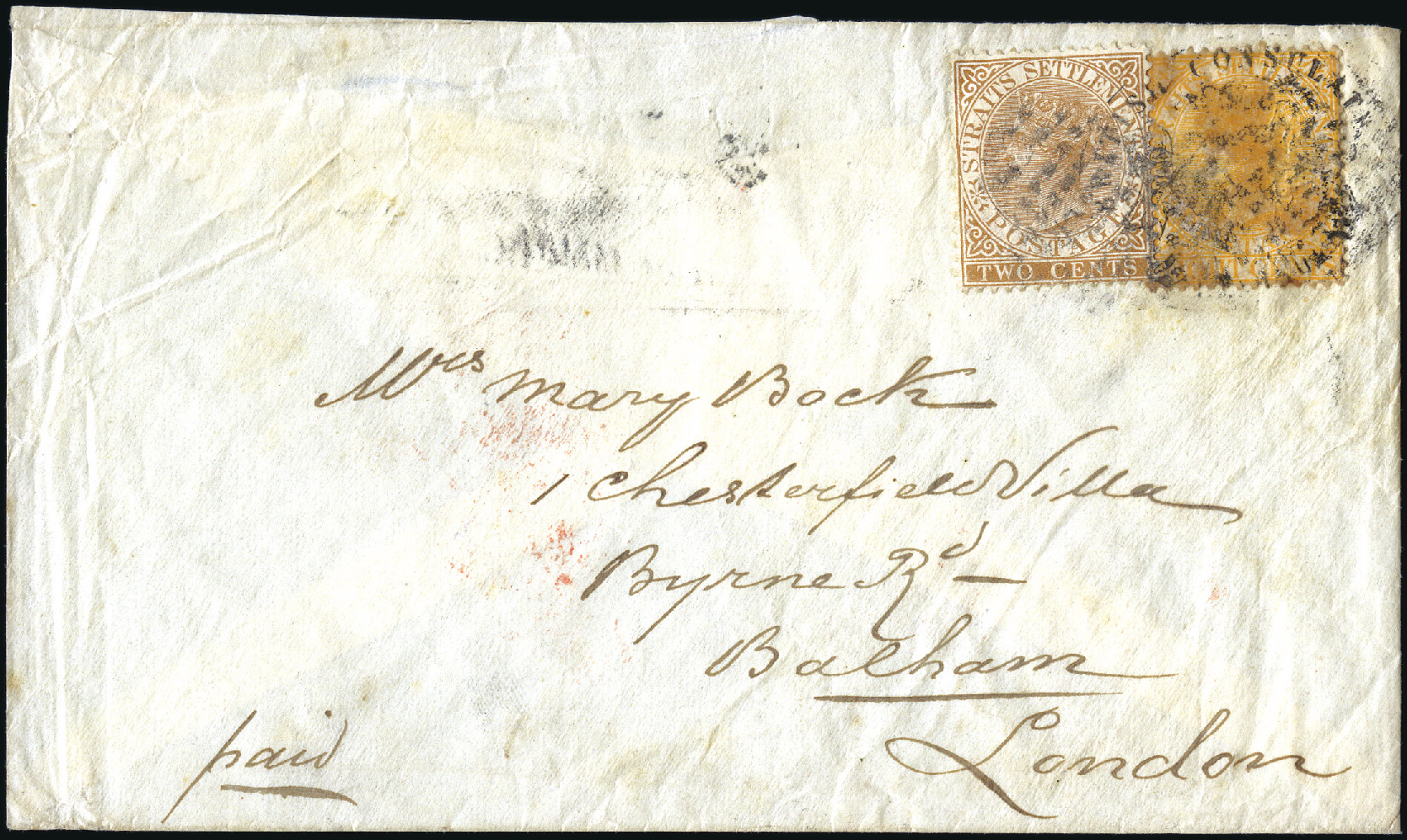 Fig. 1: Envelope sent through the British Consulate in Bangkok with the stamps cancelled by the “British Consulate Bangkok” oval seal. Sold by David Feldman in December 2015 for £18’000 (including buyer’s premium).

By March 1882 the Consulate Postmaster reported to the Postmaster-General in Singapore that he was selling on average $150 per month of Straits Settlements stamps and that he had collected $77.52 on postage due on unpaid letters received at Bangkok. The Postmaster-General in Singapore offered to the Consulate Postmaster a commission of 10% on all the Straits Settlements stamps he purchased for sale at his Post Office as well as on all amounts he collected on incoming unpaid or insufficiently paid mail. However the stamps had to be purchased direct from the Treasury and for bookkeeping purposes the stamps were overprinted with a “B”. The first stamps were sent to Bangkok on 15th April 1882. The earliest recorded usage is a cover from May 1882. Records of the numbers printed were kept but were incomplete. 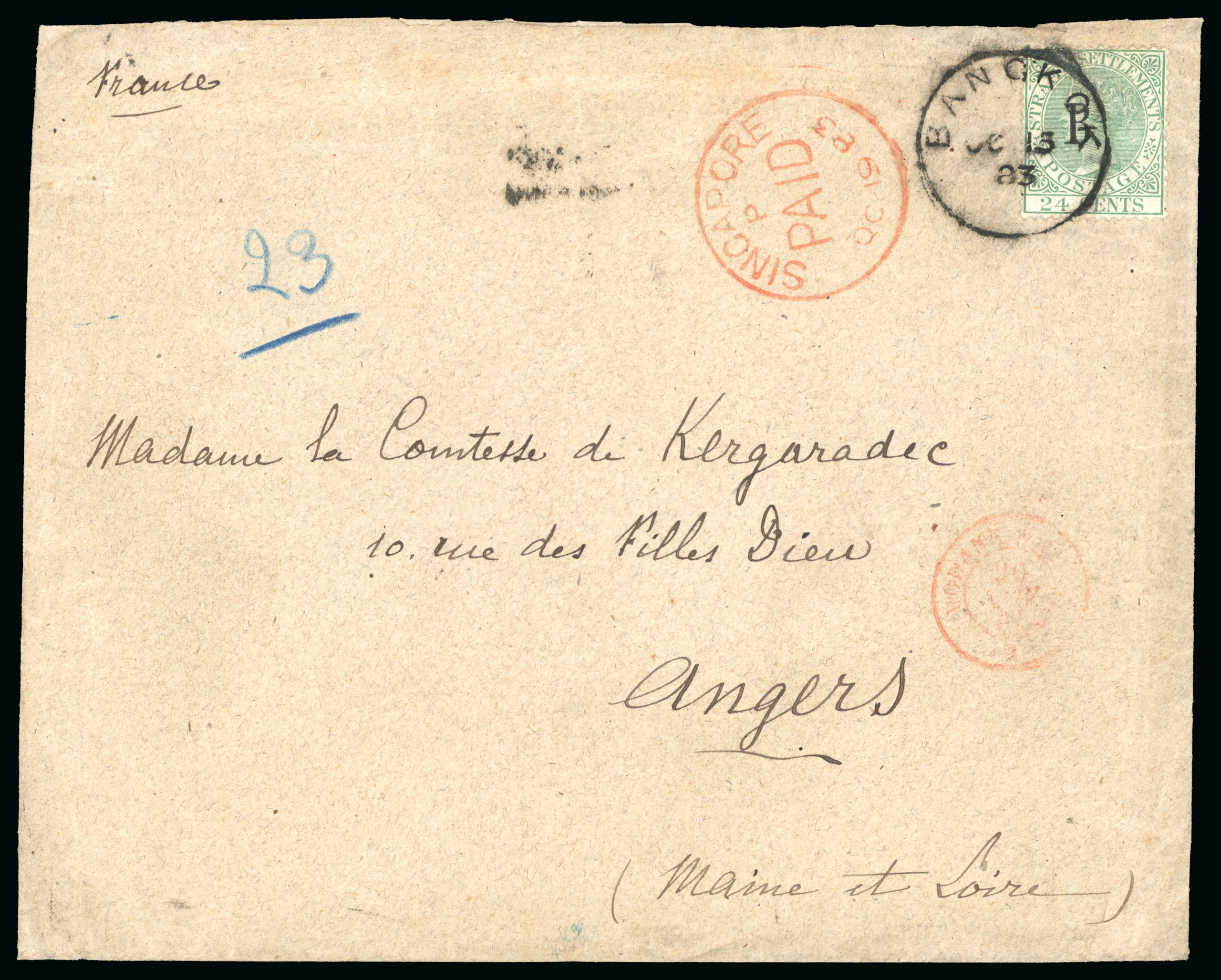 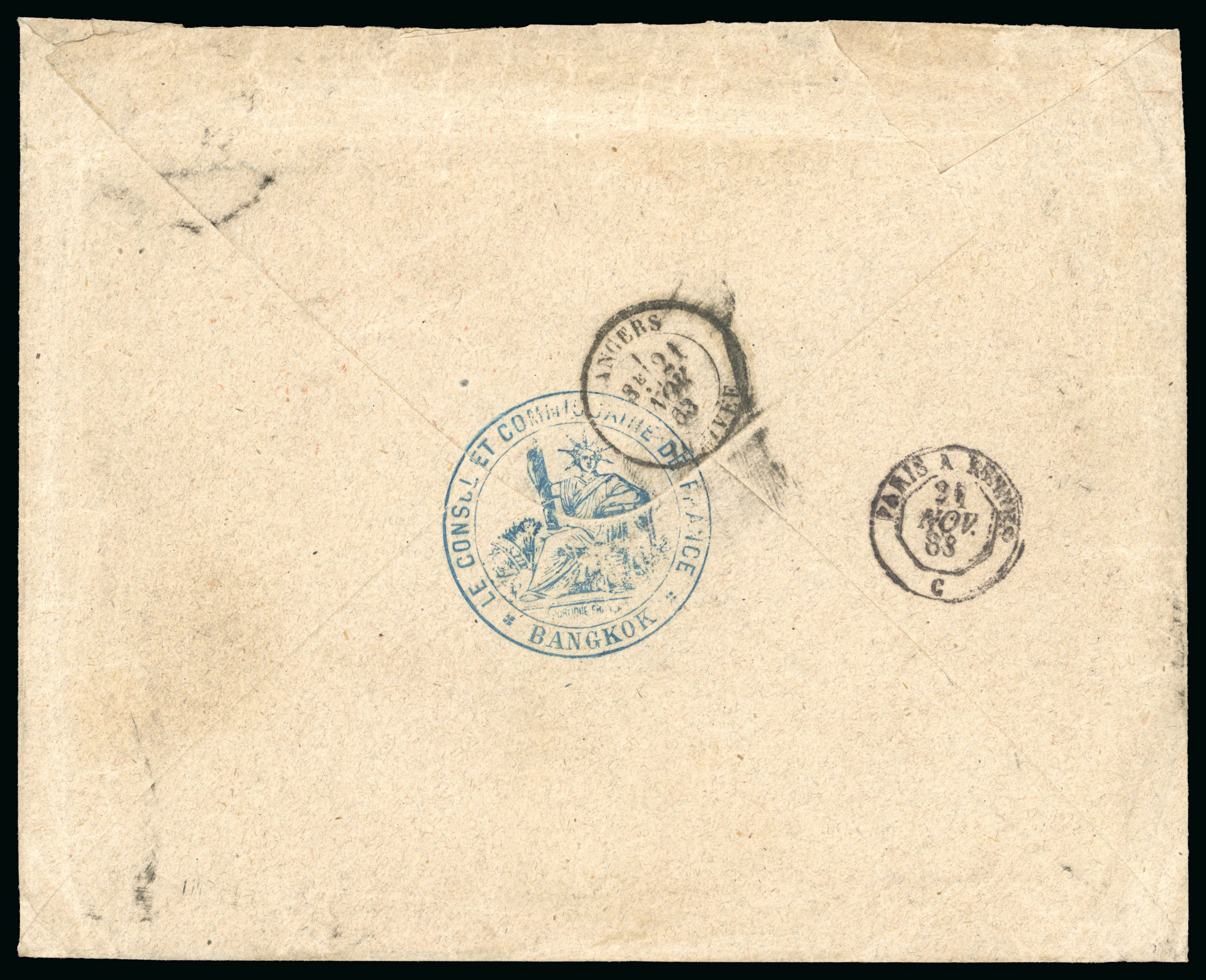 Last year the Stuart Rossiter Trust published “British Consulate Post Office at Bangkok 1855 to 1886” by Michel J. R. Houde. This comprehensive study on the stamps and postal history from Bangkok is an important reference. It contains a census of all the covers recorded by the author sent after the Bowring Treaty of 18th April 1855, and illustrates 71 covers with 1883 Bangkok “B” frankings. The cover in fig. 2 is a new discovery which doesn’t feature in the book and will be offered in our June 13th-17th 2022 auction series.

The cover was sent to Madame la Comtesse de Kergaradec in Angers, France, by the Consul-Général de France in Bangkok at the time, Le Comte de Kergaradec. The reverse shows the French Bangkok consulate cachet. It bears a 24c green tied by a Bangkok JU 13 83 cds, sent via Singapore and London to France. According to Houde’s census, this is one of only two covers bearing the 24c value, and one of only two covers paying the triple 8c rate. This important rarity of Thailand philately is estimated at £25’000-30’000.

Another major rarity of Thailand and the Bangkok “B” issues is the cover in fig. 3, which we sold in September 2012 for €132’000 (incl. buyer’s premium). It is a commercial cover sent from S. J. Smith’s Printing Office in Bangkok with an 1883 8c Bangkok “B” and a Straits Settlements 2c making the 10c rate to send the cover to the USA. This is the only known combination of Straits Settlements and Bangkok stamps on cover. 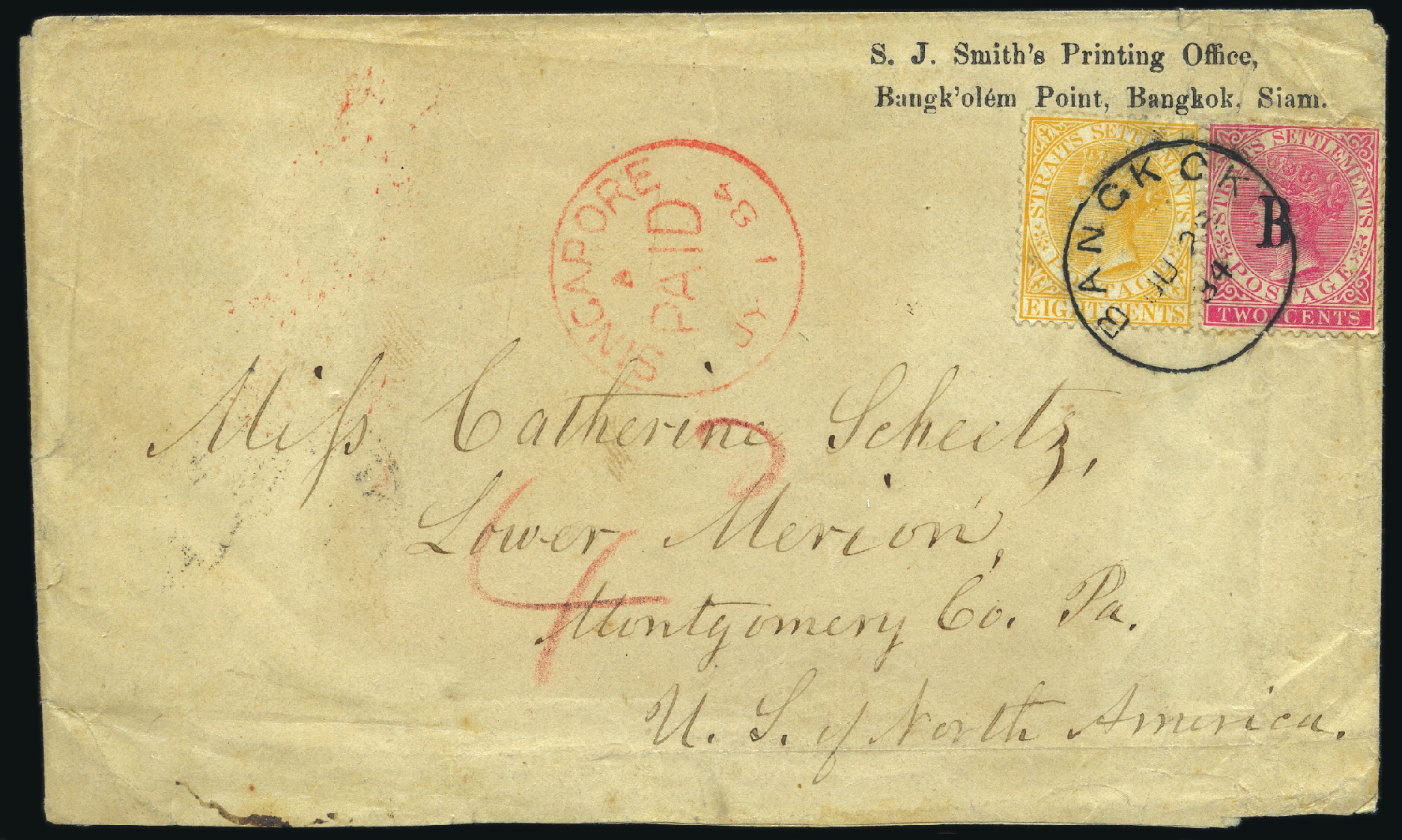