Whilst the legendary collector series has endeavoured to be reasonably chronological, with the odd rewind and fastforward, there are special moments in time when circumstances require that the normal pattern of things should halt to honour the passing of a great.

Queen Elizabeth II (1926 to 2022) is of course better known for being the longest serving British Monarch of all time, who served tirelessly and humbly as head of state for more than 70 years. In that time the world and everyone who met her would have witnessed one of the greatest, if not the greatest, servants and rulers of a nation ever to have graced this planet. Royalist or not, Queen Elizabeth II is respected everywhere. Her achievements speak for themselves and need not be reiterated here, however we do intend to acknowledge and pay respects to one aspect of her enormous contribution to the world, and that is to the world of stamp collecting. Yes, Queen Elizabeth II really was a stamp collector, and not only did she maintain the Royal collection, the Queen enhanced and developed this collection, as well as supported and encouraged the hobby. Inspired by her grandfather, King George V, Queen Elizabeth II took a real interest in organised philately.

Like her grandfather she became, in 1952, the Royal Patron of the Royal Philatelic Society London, the oldest philatelic society in existence, and visited their Devonshire Place premises in 1969, and their new premises in Abchurch Lane in 2019. On both occasions it was clear that her interest was indeed genuine and not just formality or ceremony, those who were fortunate to have been at these two events are on record as saying precisely that. And how many stamp collectors do you know who have spent £250k on a cover?  Not many. However, Queen Elizabeth II purchased the famous Kirkcudbright 1840 Penny Black first day cover in 2001, undoubtedly recognising its significance and no doubt the importance to the Royal collection. But don’t go thinking that the Queen threw money around because she had wealth, because nothing could be further from the truth, the purchase was paid for by the proceeds of a sale of duplicates from the Royal collection which occurred in the same year. 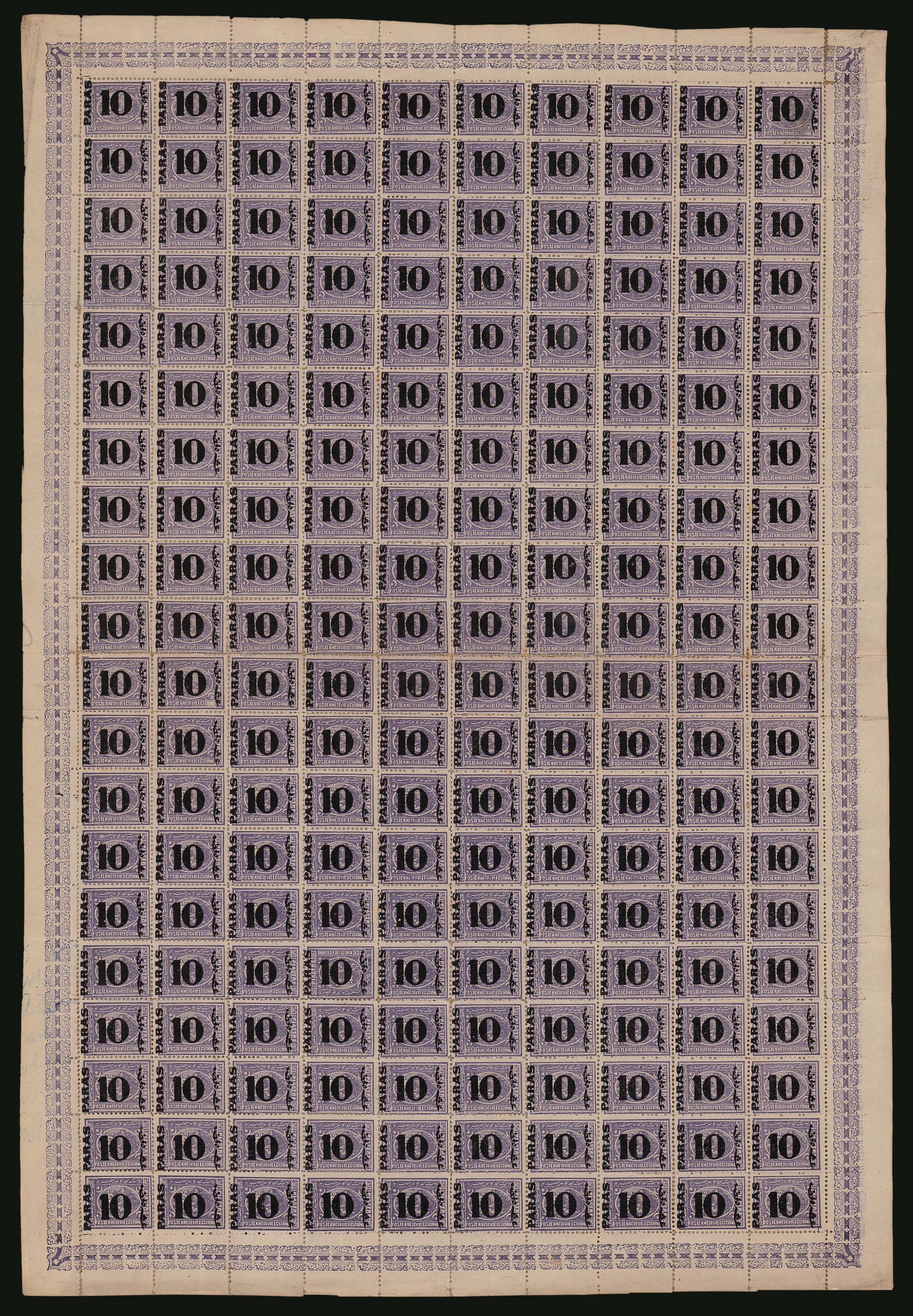 The only recorded sheet 10pa. on 2 1/2pi. violet, perf. 12 1/2, mint complete sheet of 200, with tête-bêche in position 154, the sheet is from the Intermediate State (Second State) after the first substitution of position 102 that resulted in the indented frame in position 101, very fine and an important unique showpiece. 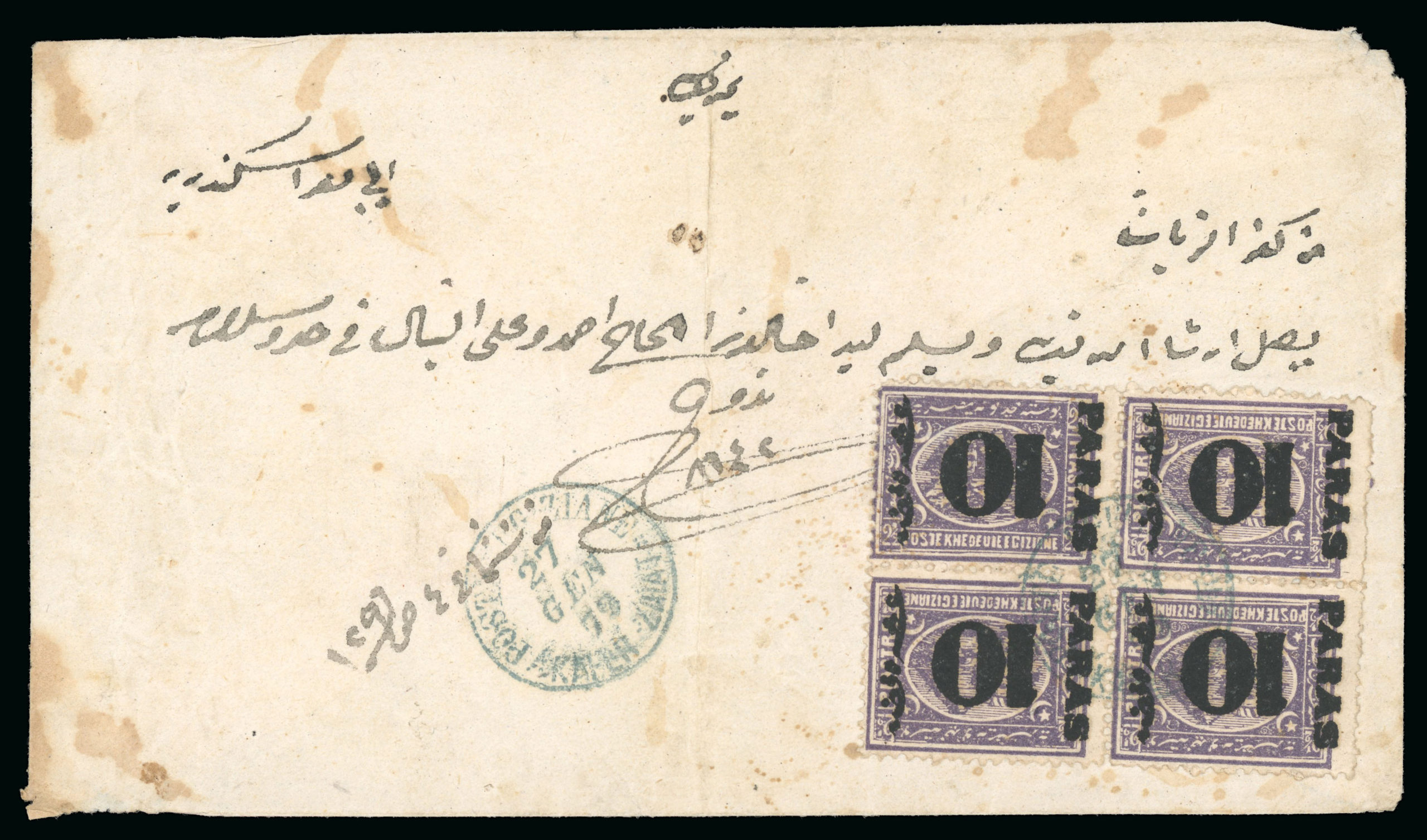 Sold at auction in our Spring 2022 Auction Series

Lot 10pa on 2 1/2pi mauve, perf. 12 1/2 x 13 1/3, block of four showing the bottom right stamp with cliché inverted resulting in a TÊTE-BÊCHE, cancelled on neat envelope from Kafer-Zayat to Alexandria, by POSTE EGIZIANE/KAFER-ZAYAT/27.GEN.79 cds, with similar alongside, arrival bs, a stunning showpiece and an important Egyptian rarity, a unique usage.

You no doubt see from time to time the Provenance ex Royal collection, and indeed at David Feldman we had one of these items in our last sale and have another in our upcoming auction, these items always generate increased interest and buyers pay a premium to acquire something which was once in the famous Royal collection. All positive energy for the hobby. This Royal collection originates as far back as 1864 when it was assembled by Prince Albert, who as we all know had a hand in capturing the philatelic imagination of another prince who later became King. It is testimony to our stamp collecting Queen that she has cared and nurtured her family’s stamp heritage.

Like many of the legendary collectors we have celebrated in past episodes, the Queen has readily exhibited in the United Kingdom and overseas. She has generously allowed access to this fabulous collection – in fact such access has never been so great as under her reign. This has aided the furtherment of the hobby by supporting specialists and experts to compare and study. It also has to be said that she gave us many iconic stamps such as Machins, Wildings and many spectacular commemoratives, which have inspired past collectors, invigorated the current crop of philatelists and will energise the future of philately.

If all this wasn’t enough to endorse the Queen’s credentials as a great collector, then one of the most telling tales is that according to commentators who speak with heads of state staying at Buckingham Palace, the Queen is proud of her stamps so much that she loves showing them off to visitors. What a beautiful picture to underpin our respect to, a magnificent Queen for Great Britain and a wonderful Queen of stamp collecting. To ‘The Queen of Stamps’.