The “Art of Sperati” Collection

In our upcoming Autumn Auction series 2022, being held from December 5th to 9th in Geneva, we have a catalogue which features unique material from the archive of Jean de Sperati called The “Art of Sperati” Collection, including 136 lots of never seen before items, as well as many new discoveries and unknown work undertaken by the legendary stamp artist. We take a closer look at six of the items on offer and highlight their significance both to worldwide philately and also to understanding the fascinating story of Sperati. 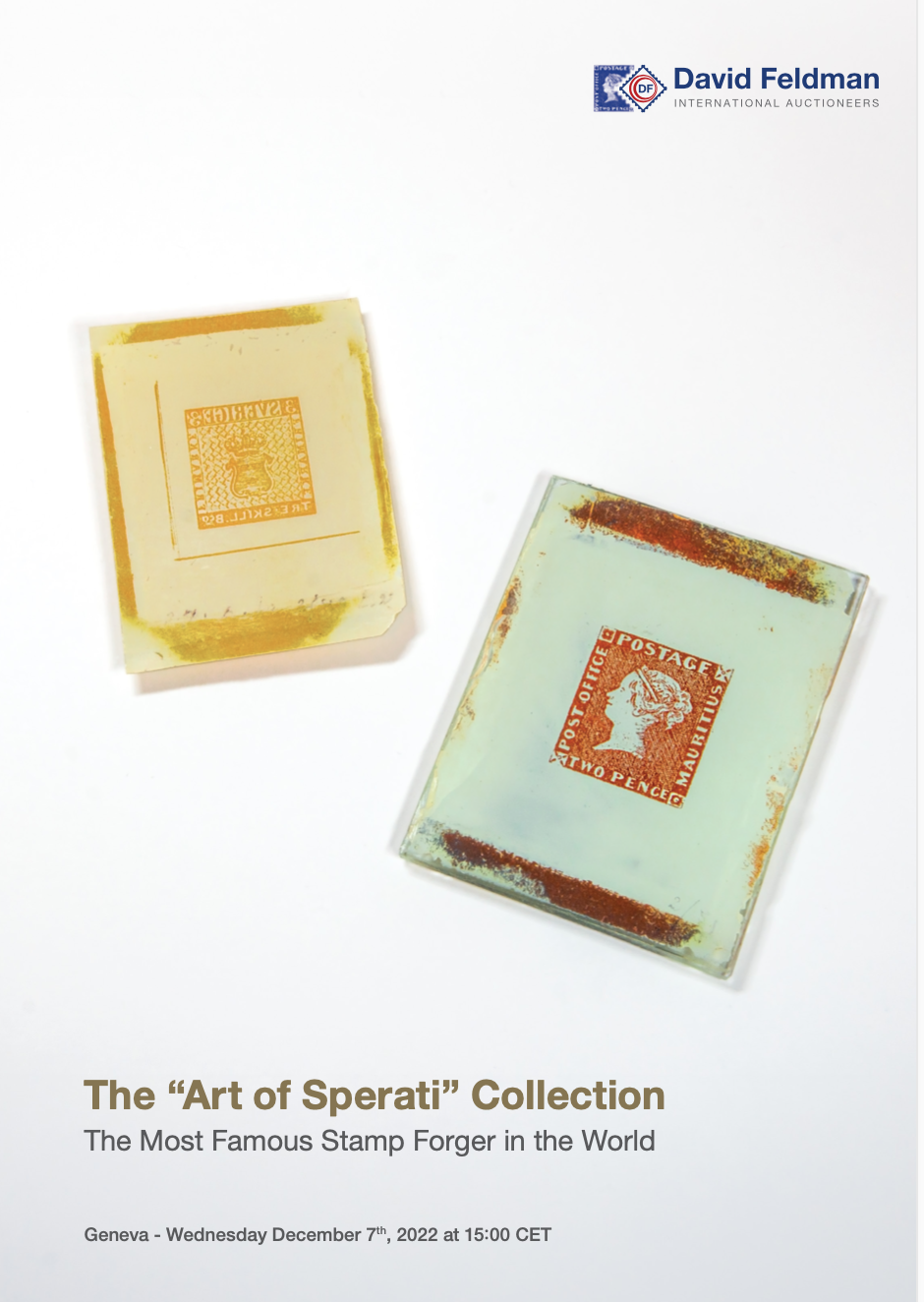 Jean de Sperati (1884 to 1957) without doubt created, with his own hands, the greatest ever collection of world classic stamp forgeries ever seen. To many in the philatelic world he is the ultimate stamp imitator, to others his creations are revered as the most dangerous of all adhesive reproductions. However, Sperati always insisted that his reproductions were art and he explained in his own words why he undertook the most audacious philatelic project ever known; “I embarked on a project to obtain documentary evidence of the inability of experts to detect my imitations, be they professionals or dealers, and to make available my products as ‘works of art’, which status the opinion of experts justified”.

Of course we know that in the early 1950s Sperati sold an archive of his work to the British Philatelic Association (BPA), who with Robson Lowe, one of Sperati’s greatest admirers of the time, produced books in 1955 which aided the philatelic community to understand better how to detect his replicas. One of the most famous of all forgery experts, collector Carl Walske (1922-2009), also in partnership with Lowe authored ‘The Work of Jean de Sperati II, including Previously Unlisted Forgeries’ published in 2001. Until now no substantial work, or new discoveries have been published, or offered for sale.  It gives us enormous pleasure to present this groundbreaking offering which comprises previously unrecorded material, as well as unknown working reproductions. It contains the most significant selection ever offered of ‘master matrices’ and ‘glass support clichés’, ‘clichés on celluloid’, ‘copper plates’ as well as ‘working proofs’.

The dedicated catalogue presents previously unknown work such as his attempts to reproduce the famous Mauritius 1847 “Post Office” issue which is outlined in our featured rarity of the month article as additional material on the “Post Paid” issue and also the Great Britain 1840 “VR” Penny Black, which includes an incomparable group of four items. There are two negative glass clichés from a master negative, glass support cliché of the back impression, as well as a black impression on transparent celluloid. This represents a significant discovery because the Penny Black has not been mentioned before in the literature dedicated to the work of Jean de Sperati. 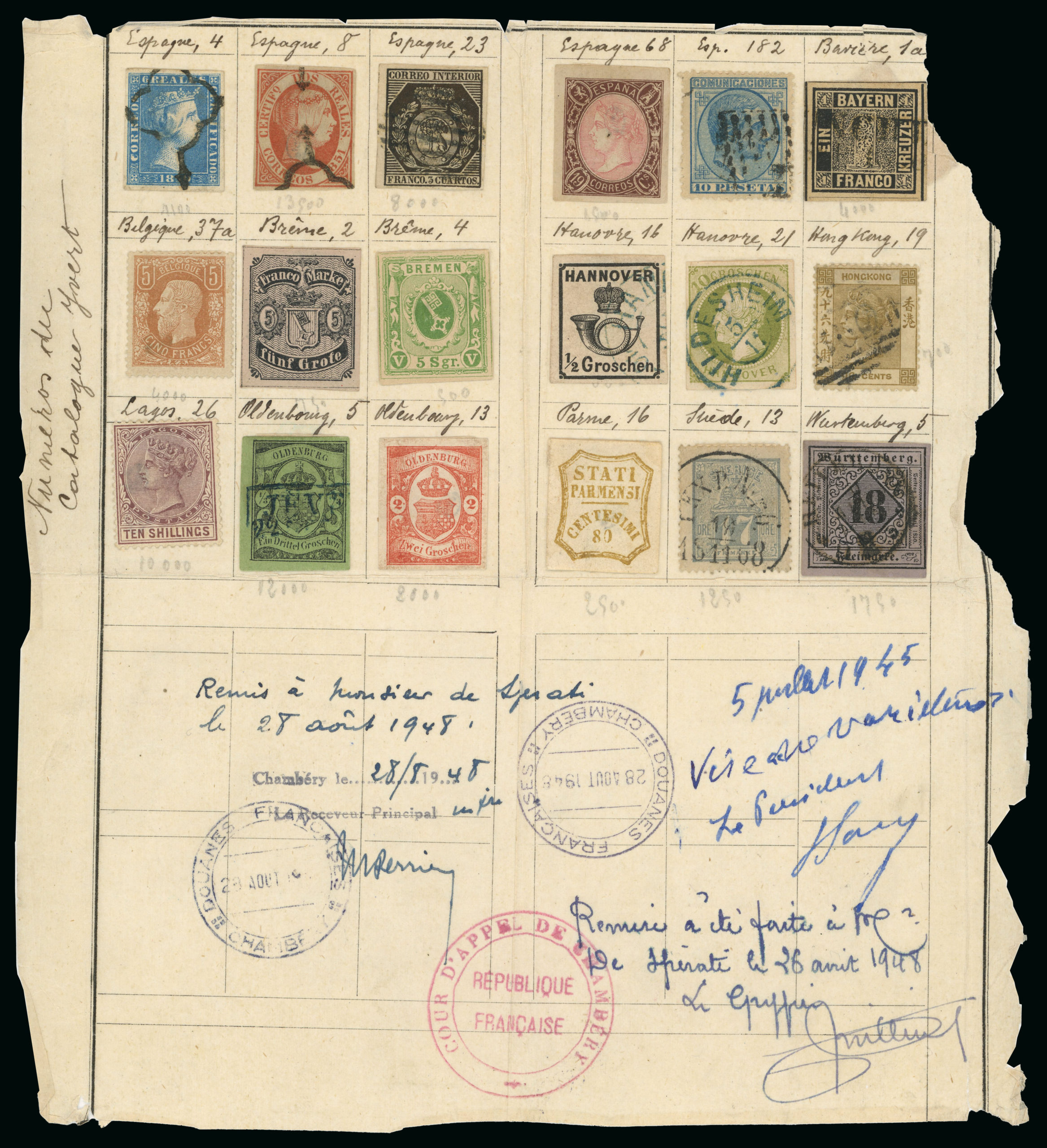 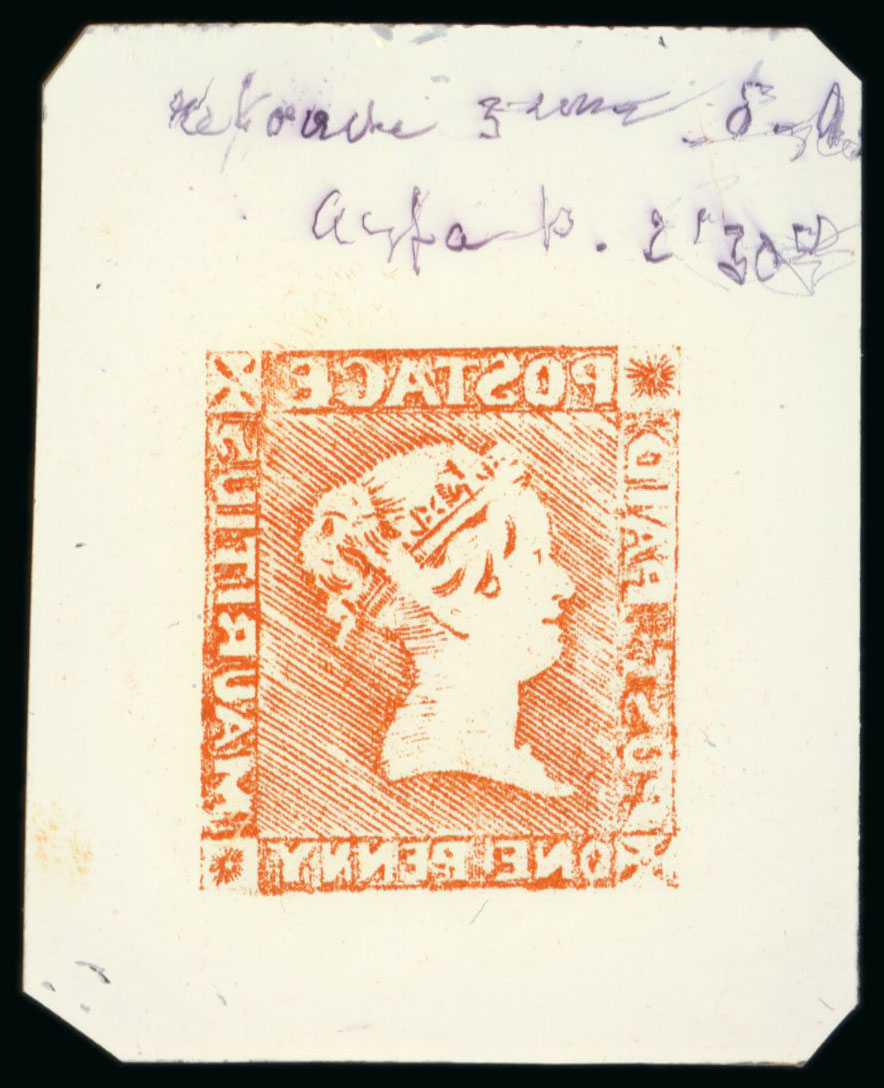 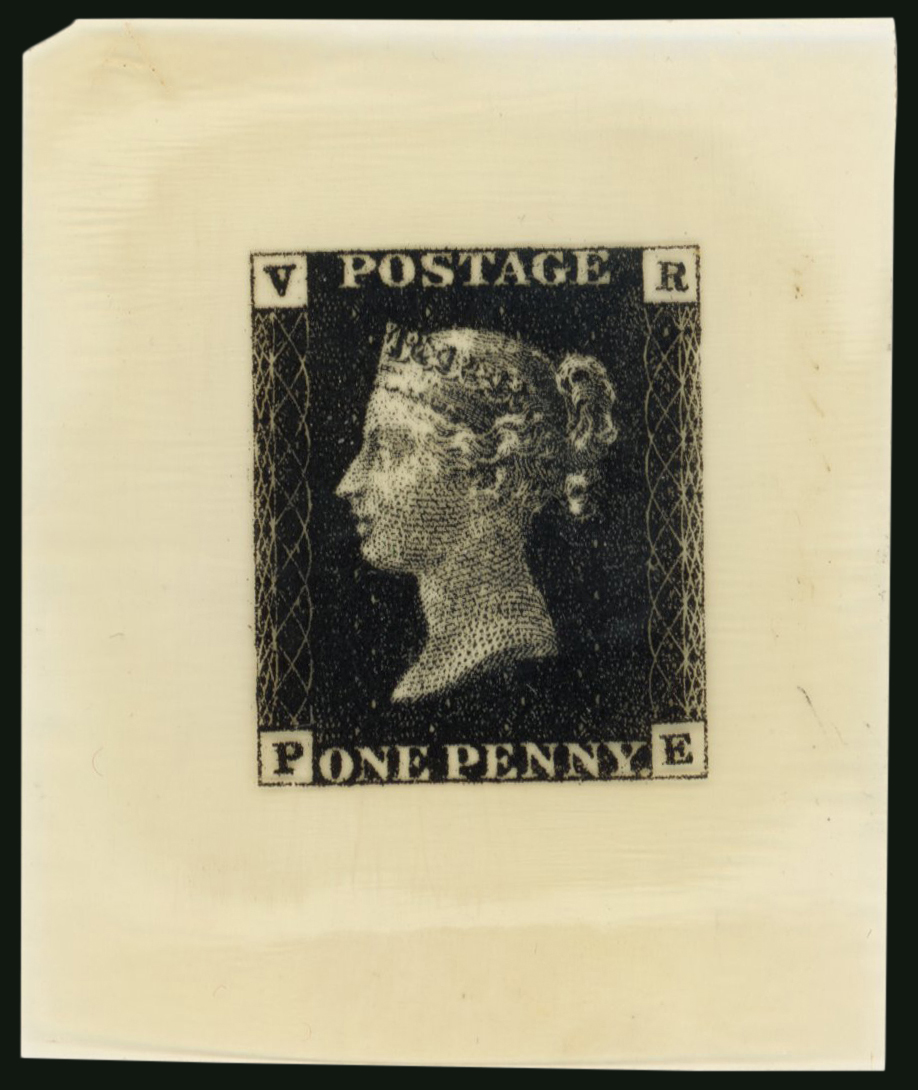 The offering begins with a lot which sets the scene with the ultimate Sperati document that was seized by the French Customs in 1942, which was the source that originally revealed to the world the genius of this exceptional artist.  It is an iconic sheet of paper, prepared to contain stamps, in a format and design which was used by Sperati for his shipments, exhibiting 18 classic reproductions of Spain (5), Bavaria, Belgium, Bremen (2), Hanover (2), Hong Kong, Lagos, Oldenburg (2), Parma, Sweden and Wurttemberg, each designated above with its corresponding country and Yvert catalogue number in manuscript by Sperati. It shows below the stamps cachets and signatures related to the Chambéry judicial process: signature of the President and Secretary of the “Court d’Appel”, indicating the 18 reproductions were to be returned to Sperati, dated on 26.4.1948 and with red cachet of the “Court d’Appel” of Chambéry, as well as two dated cachets of the French Customs at Chambéry on 28.8.1948 with additional cachet and signature, with text stating this document to have been remitted to Sperati on 28.8.1948. On the back of each stamp a handstamp “Copie” was struck, which was only applied after the final judicial conclusions. It is an extraordinary and unique document representing one of the most significant items related to Jean de Sperati and his work, undoubtedly an important piece of philatelic history. 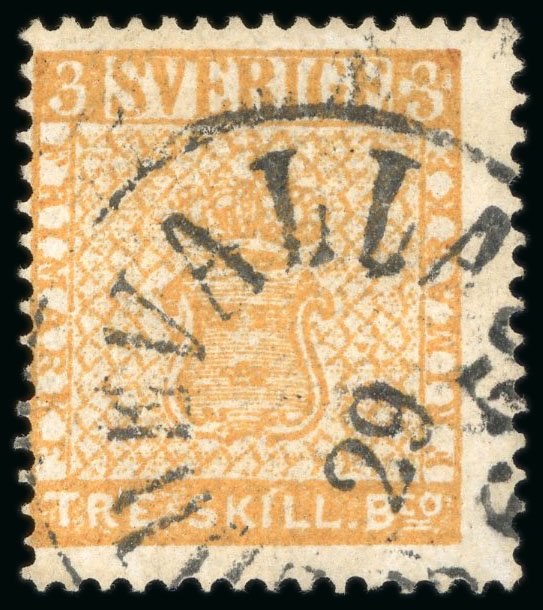 Also on offer are additional material from known reproductions of many countries including the 1855 error of colour Treskilling Yellow, which is a unique collection of master and working clichés illustrating part of the work and techniques he undertook to reproduce one of the most valuable and iconic errors of worldwide philately; only the BPA reports just one cliché in its collection, whereas this lot does not only include seven clichés, but also the important master negative; the “Ultimate” collection had just one example of the finished colour of error reproduction and no clichés, and the Postal Museum in Paris has no clichés for Sweden.

The collection is world-wide and provides an opportunity for collectors to obtain unique working and final reproductions of stamps they collect, it also allows for those interested in the personal life of the forger to acquire the iconic Sperati binocular glasses, contained within their original ‘L. Berland – Loupe Binoculaire Reglable’ wooden box case. These glasses are synonymous with Sperati’s meticulous and detailed stamp reproductions and the images of him wearing them are among the most recognised images in the world of philately. The original instructions for use are also contained with a short note indicating they were gifted as a present to a friend of the Sperati family by Yvonne de Sperati, Jean de Sperati’s daughter; it reads; “Monsieur (…), in memory of our dear deceased and with my sincerely profound sympathy, Yvonne de Sperati, 10th September 1957″ – Sperati died on the 27th April of the same year; it is a mythical emblem of both Sperati and his punctilious master craft and arguably a museum item which will forever invoke the memory of the greatest stamp artist ever to have graced the world. 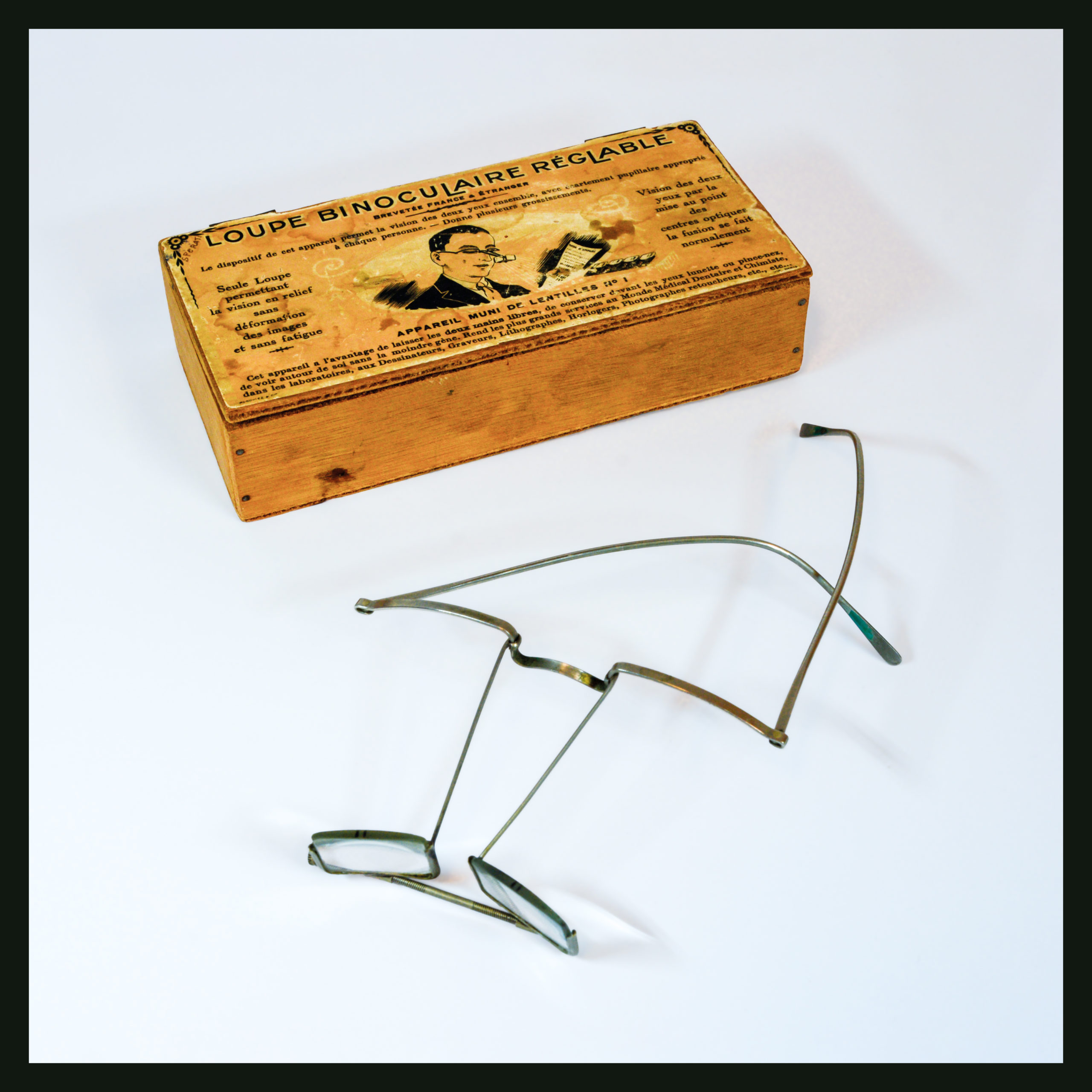 These are just a selection of the lots available, the pdf catalogue is available for upload online here and the printed version will be ready during November.